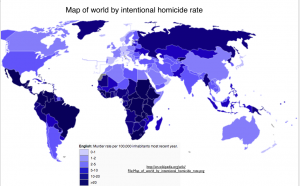 The previous post on murder rates in Brazil featured a Wikipedia map of homicide rate by country, based on a 2011 report by the United Nations Office on Drugs and Crime (UNODC). That map, reproduced here, is less than ideal, as its highest category lumps together countries with hugely different homicide rates, ranging from 20.1 per 100,000 in Kyrgyzstan to 91.6 in Honduras. I therefore remapped the same data in 12 rather than six categories. I also used a two-color scheme, depicting low-murder-rate countries in varying shades of blue and high-murder-rate countries in red. Such a system better captures the huge variation in murder rates, which ranges from 0.3 per 100,000 (Iceland and Singapore) to almost 100 per 100,000 (Honduras). 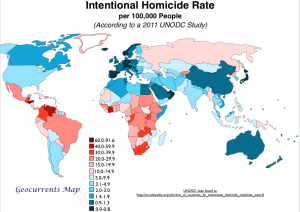 The geographical patterns revealed by the map are clear. Murder is much more common in tropical Latin America, sub-Saharan Africa, and Russia than it is in most of the rest of the world. Homicide is relatively rare in Europe, East Asia, and the Middle East & North Africa.

But are such figures reliable? In general, murder data is considered to be one of the more reliable crime statistics, due in part to the mere severity of the offense. But that still does not mean that it is necessarily trustworthy. I am skeptical, for example, of the low homicide rate posted for Somalia (1.5), which is substantially below those of neighboring countries. Much of Somalia is wracked by extreme violence, although it can be difficult to determine whether an individual killing is best considered an act of murder or an incident of war. But more to the point, how could a country as anarchic as Somalia possibly gather dependable murder data?

The low reported murder rate in China has been received with some skepticism, as have official reports that it has been declining sharply in recent years. As The Economist recently reported:

Official figures show that the number of murder cases rose from fewer than 10,000 in 1981 to more than 28,000 in 2000. Since then it has dropped almost every year, to about 12,000 in 2011. China’s statistics bureau does not disclose which crimes are included in its murder data. Chinese scholars say that a single case might include several deaths, and that some killings which occur in the course of other violent crimes such as rape or robbery might be excluded. In a 2006 report, the World Health Organisation estimated that in 2002, when 26,300 murder cases were recorded in China, 38,000 people died from “homicide-related injuries”. 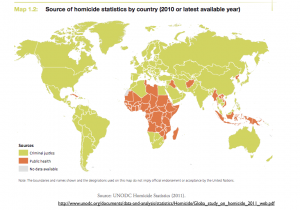 When I mentioned China’s supposedly low murder rate in my seminar on the history and geography of current global events this week, the one Chinese student in the class expressed strong doubt. According to her, murder for gambling debt is common in China but rarely recorded. Although I was unable to find systematic information on this topic, an internet search of “China, murder, gambling” does return a curiously large number of hits.

The authors of the UNODC report are well aware of such data problems, and they worked hard to overcome them. They have considered the discrepancies found among different sources of information for different countries, and they weight the results accordingly. For several parts of the world they have abandoned conventional “criminal justice data” in favor of “public health sources.”  In the process, they have revised murder rates of many African countries sharply upwards. 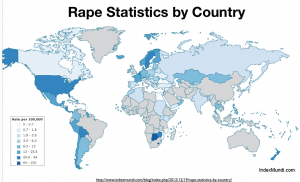 If global murder-rate figures are problematic, rape-rate figures appear to be almost worthless. Consider, for example, the Index Mundi rape-rate map posted here, which indicates that Sweden and New Zealand have some of the highest levels of rape in the world, and that Egypt has one of the lowest. Although the map comes with a disclaimer,* it is hardly adequate. Could anyone possibly believe that Sweden has a higher rape rate than Egypt? Egypt is currently suffering a rape epidemic so severe that it is becoming a diplomatic issue. Sweden, meanwhile, consistently rates as one of the most gender egalitarian, nonviolent countries in the world.

Yet it does appear that many people accept such official statistics, and are happy to use them to score ideological points. This occurs on both on the right and left sides of the political spectrum. In a letter to the government of Sweden, leftist filmmaker Michael Moore writes:

Let me say that again: nine out of ten times, when women [in Sweden] report they have been raped, you never even bother to start legal proceedings. No wonder that, according to the Swedish National Council for Crime Prevention, it is now statistically more likely that someone in Sweden will be sexually assaulted than that they will be robbed. Message to rapists? Sweden loves you! So imagine our surprise when all of a sudden you decided to go after one Julian Assange [of Wikileaks fame] on sexual assault charges.

On the political right, an article in FrontPage also accepts Sweden’s official rape statistics on face value, but places all the blame on Muslim immigrants:

In 2003, Sweden’s rape statistics were higher than average at 9.24, but in 2005 they shot up to 36.8 and by 2008 were up to 53.2. Now they are almost certainly even higher as Muslim immigrants continue forming a larger percentage of the population. With Muslims represented in as many as 77 percent of the rape cases and a major increase in rape cases paralleling a major increase in Muslim immigration, the wages of Muslim immigration are proving to be a sexual assault epidemic by a misogynistic ideology.

Although Muslim immigrants have been responsible for many if not most recent cases of forcible rape in Sweden, the country’s extremely high official rape rate seems to be mostly a result of tabulation strategies. Many acts are counted as rape in Sweden that would not be so counted elsewhere. As explained recently in the BBC:

On the face of it, it would seem Sweden is a much more dangerous place than these other countries. But that is a misconception, according to Klara Selin, a sociologist at the National Council for Crime Prevention in Stockholm. She says you cannot compare countries’ records, because police procedures and legal definitions vary widely. In Sweden there has been this ambition explicitly to record every case of sexual violence separately, to make it visible in the statistics,” she says. “So, for instance, when a woman comes to the police and she says my husband or my fiance raped me almost every day during the last year, the police have to record each of these events, which might be more than 300 events. In many other countries it would just be one record – one victim, one type of crime, one record.” 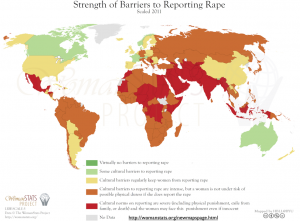 Many countries exhibit the opposite tendency: the systematic under-reporting of rape. Rape cases are not reported for a variety of reasons, both cultural and institutional.

One strategy for determining the actual prevalence of rape is to examine obstacles to reporting the crime. The Woman Stats Project, which has created an intriguing map collection, has done precisely that, mapping the “Strength of Barriers to Reporting Rape.” As can be seen, cultural and legal obstacles are depicted as extreme across South and Southwest Asia, and much of Africa as well. The data source, however, is not specified, and I am skeptical of many of the claim advanced by the map. Are reporting barriers really much more intense in Germany than they are in Austria or Switzerland?  I have more serious misgivings about another map in the same cartographic series, which depicts the prevalence of rape. This map tells us that rape is non-existent in Armenia and Georgia, and that India, Pakistan, and Sudan have a lower prevalence of the crime than Iceland, Finland, and Australia. It also tells us that Brazil—another country currently experiencing a “rape epidemic”—suffers less rape than the Netherlands and at least six times less rape than Montenegro. The huge gaps between neighboring countries in Africa are also highly suspicious. 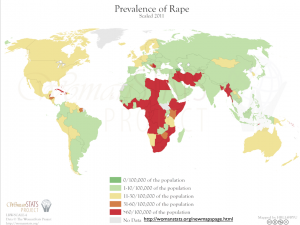 When it comes to crime rates, it does seem that statistics—and maps based on those statistics—are often so misleading as to be essentially dishonest.

*The disclaimer reads as follows: “Note though that comparison of crime rates across countries needs to be be taken with a grain of salt, since in some countries the population may be reluctant to report certain types of crimes to the police.”