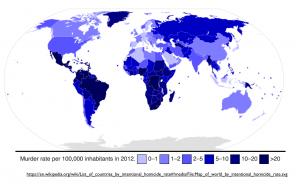 Considering the astounding escape of Mexican drug lord Joaquín Guzmán (also know as “El Chapo”) from a supposedly secure prison, this seems like an appropriate time to examine the geography of violent crime in Mexico. Comparing crime rates from place to place is a notoriously difficult exercise, as official statistics tend to be unreliable and are often gathered on a different basis in different jurisdictions. Data on intentional homicides, however, are often viewed as relatively solid and comparable, although even here, as the Wikipedia notes, “The legal definition of “intentional homicide” differs among countries. Intentional homicide may or may not include infanticide, assisted suicide or euthanasia.” 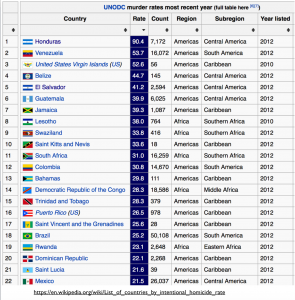 The official statistics that we do have indicate that Mexico has a high rate of intentional homicide, although by no means the highest in the world. As the Wikipedia table posted here indicates, Mexico trails Honduras by a wide margin, and comes in below even Puerto Rico and the Bahamas. Still, Mexico’s intentional homicide rate is far higher than that of any European country. (In Europe, rates per 100,000 people vary from 5.0 in Albania to 0.3 in Iceland; in the United States, the figure is 4.7).

It is misleading, however, to view Mexico as a singular unit when it comes to its homicide rate — or in terms of just about anything else, for that matter. As it turns out, Mexico’s intentional homicide rate varies hugely from state to state. In Yucatán, the figure in 2011 was 2.7, well below that of the United States, whereas that of Chihuahua was 130, far above that of Honduras. In 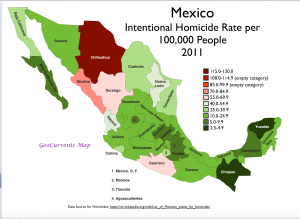 2010, moreover, Chihuahua had registered many more murders than it did in 2011 (6,407 vs. 4,502). Since then, the rate has dropped a bit more, but Chihuahua has long been and still is a dangerous, crime-ridden state. As was reported in the El Paso Times: 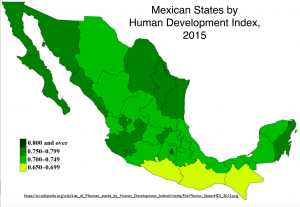 As the murder map posted here shows, a few additional Mexican states stand out as violent places. Intentional homicide rates are also elevated in Sinaloa, Durango, and Guerrero, although none really compares with that of Chihuahua. The general pattern is that of more homicide in the north and less in the southeast. Intriguingly, such patterning correlates poorly with socio-economic indicators. The northern states with elevated violent crime tend to be more developed than the less violent states of the southeast. Chihuahua, for example, has one of Mexico’s highest life-expectancy figures, whereas Chiapas has one of the lowest life-expectancy figures as well as one of the the 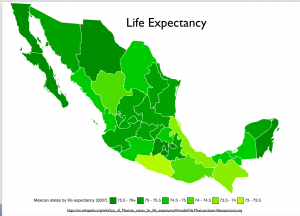 lowest homicide rates (longevity, however, varies surprisingly little across Mexico). If anything, rates of indigenous language speaking, which tend to correlate positively with poverty, correlate negatively with intentional homicide. Guerrero, however, is something of an exception on all of these scores. 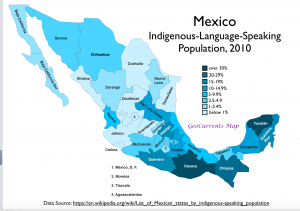 Such seemingly odd patterns, however, are in the end not very mysterious. Intentional homicide in Mexico is largely attributable to battles between drug gangs, a phenomenon divorced from the geography of wealth and poverty. In Chihuahua’s Ciudad Juarez, for example, 340 out of 434 murders in 2014 were attributed to drug-related causes. The extraordinarily high homicide rate in Chihuahua is clearly linked not just to drugs but more specifically to the actions of a few narcotics kingpins. The key factor, according to the El Paso Times, has been the “brutal battle between the Juárez drug cartel led by Vicente Carrillo Fuentes and the Sinaloa drug cartel led by Joaquin “Chapo” Guzman.”

Guzman’s home state of Sinaloa, posting Mexico’s second highest murder rate, has long been noted for its violence and drug trafficking. As was reported by PBS:

If you say the words “Sinaloa,” and more particularly “Culiacán” to most Mexicans, the first things they think of are drugs and violence. …. The drug lords who have come out on top have done so through a ruthless exercise of force, and the willingness to resort to violence and killing has long been considered a Sinaloan specialty.