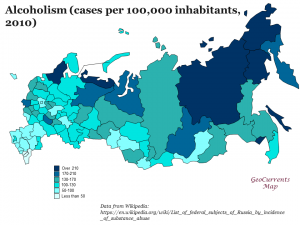 In the previous post, I examined regional differences in demographic issues across Russia. As many sources note, alcoholism is one of the biggest factors contributing to low life expectancy and high rate of death from non-natural causes. In fact, Russia ranks at the top in terms of both alcohol consumption (especially by men), as discussed in detail in my earlier post. Russia and the neighboring FSU countries also top the charts in percentage of deaths attributable to alcohol. According to the World Health Organization report, such a high level of alcohol-related deaths results not only from what and how much people drink (e.g. drinking spirits causes more alcoholism and alcohol-related deaths than drinking wine or beer), but also how they drink. The WHO report includes data on what the authors refer to as “Patterns of Drinking Score” (PDS), which is “based on an array of drinking attributes, which are weighted differentially in order to provide the PDS on a scale from 1 to 5”; the attributes include the usual quantity of alcohol consumed per occasion; festive drinking; proportion of drinking events, when drinkers get drunk; proportion of drinkers who drink daily or nearly daily; and drinking with meals and drinking in public places. Some countries with high per capita alcohol consumption have low PDS scores (particularly, countries in southern and western Europe), while Russia has one of the highest PDS scores worldwide.

A combination of what, how much, and how people drink—as well as who is doing the drinking—creates the observed patterns of alcoholism within Russia as well. (The data on alcoholism and drug abuse, discussed below, comes from the Wikipedia.) The prevalence of alcoholism differs from region to region even more than other social indicators considered in previous posts. The range between the highest and lowest alcoholism levels is one of three orders of magnitude, from less than one case reported per 100,000 population in Ingushetia to nearly 590 cases per 100,000 in Chukotka. Overall geographical patterns are quite clear: the highest levels of alcoholism are registered mostly across the Far North (and some of the regions of the Far East, which despite their relatively low latitude qualify legally as the “Far North”), while the lowest levels of alcoholism are found in the Caucasus. According to the alcoholizm.com website, alcohol consumption is also the lowest in the north Caucasus, especially in Chechnya, Ingushetia, and Dagestan, and the highest in the harshest areas of the Far North/Far East (particularly in the Jewish Autonomous oblast, Nenets Autonomous Okrug, Magadan, and Kamchatka). However, they do not list the specific figures of alcohol consumption in various regions and I could not find them elsewhere, but I suspect that the quantity of alcohol consumed per capita in the northeast Caucasus and in the Far North does not differ by three orders of magnitude. Much more significant is the type of alcoholic drink being consumed: vodka is the most common choice in the Far North, whereas the Caucasus region has a long history of viniculture going back 8,000 years. Besides viniculture, the Caucasus is well-known for its venerable tradition of wine-drinking with meals, accompanied by elaborate toasts, which slows down the consumption and metabolism of alcohol. Another important factor is genetically based difficulty that people from many indigenous groups have in breaking down alcohol. This genetic propensity causes particularly high levels of alcoholism in such areas of northern Russia as Nenets Autonomous Okrug, Sakha Republic, and Chukotka. 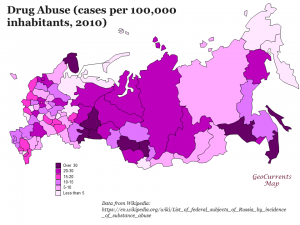 Unlike alcoholism, drug abuse is considerably less common than alcoholism across the Russian Federation: all but four federal subjects register over 50 cases of alcoholism per 100,000, whereas none reports more than 50 cases of drug abuse per 100,000, and fewer than a dozen register over 30 cases. Geographical patterns of drug abuse are less obvious and harder to explain than those of alcoholism. Particularly high levels of drug abuse (over 30 cases per 100,000) are found in Murmansk, Chelyabinsk, Sverdlovsk, Kurgan, Novosibirsk, Kemero, Amur, and Sakhalin oblasts, and in Primorsky Krai. One common denominator is that all of these regions had a high level of industrial urban development during the Soviet period but have experienced significant economic stagnation since the fall of the USSR. One area that does not fit this generalization is Sakhalin, which is still a major area of natural resource extraction and processing. It would be interesting to know if any of our readers can think of another explanation for these patterns of drug abuse. 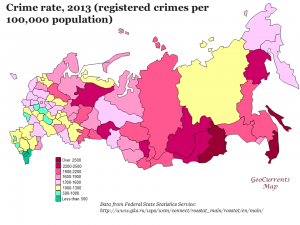 Interestingly, neither alcoholism nor drug abuse correlate very closely with crime rates, although there is a connection. Of the areas where drug abuse is most prevalent, only Sakhalin and Kemerovo oblasts also exhibit high crime rates (over 2500 cases per 100,000), while several others—Murmansk, Sverdlovsk, and Novosibirsk—have an average level of crime. Alcoholism correlates with crime even less, as only Magadan and Sakhalin oblasts exhibits high levels of both. A number of regions with a high level of alcoholism, particularly Nenets Autonomous Okrug and Sakha Republic, which have a large percentage of indigenous population, exhibit little crime. Other areas with high proportions of indigenous peoples, such as the Caucasus and the Middle Volga, also have particularly low levels of crime. The low level of reported crime in Tula, Ryazan, and Belgorod oblasts is perplexing, however. 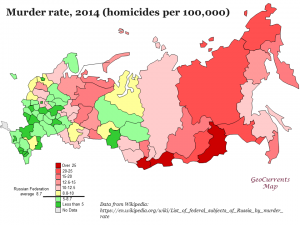 When it comes to murder, eastern and especially southern Siberia is clearly more dangerous than European Russia or western Siberia. The “murder capital” of Russia is Tuva, which registered over 35 homicides per 100,000 population. Neighboring Altai Republic has over 25 murders per 100,000 population, as does Zabaikalsky Krai. Curiously, high rates of alcoholism may contribute to the elevated murder rate in such areas as Sakha Republic, Chukotka, and Jewish Autonomous oblast, but other areas where alcoholism is prevalent, such as Karelia and Sakhalin, register only slightly above-average murder rates. Similarly, the prevalence of drug abuse does not correlate with murder rates. Nor do crime rates or murder rates correlate with the level of urbanization, unemployment level, or regional GDP.