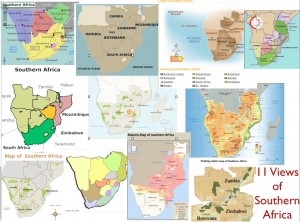 Recent GeoCurrents posts have focused on Southern Africa. The regional boundaries, however, has not been defined. What exactly, one might ask, does Southern Africa encompass? It obviously includes South Africa, but what other countries, or parts of countries, are slotted into the region? As is often the case with broad geographical designations, the answer remains elusive. Although the initial “s” in “Southern” is usually capitalized, indicating usage as a specific place-name rather than as a vague locational referent, different sources define the region in strikingly different ways. As a result, one can rarely be sure exactly what an author means when he or she discusses “Southern Africa.” 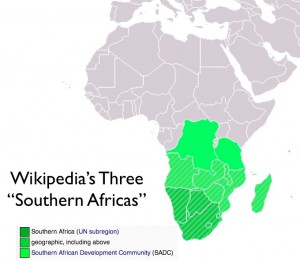 The Wikipedia article on Southern Africa notes that the term is “variably defined,” but goes on to specify three standard definitions, two formal and one informal. The first is that employed by the United Nations in its “geoscheme” of global division, used primarily for organizing statistical information. The U.N.’s “Southern Africa” is of minimal scope, composed only of South Africa, Namibia, Botswana, Lesotho, and Swaziland. (The same five countries also constitute the Southern African Customs Union, regarded as the oldest customs union in the world). The Wikipedia’s second definition follows the membership roll of the Southern African Development Community (SADC), generating a much larger region; this version of Southern Africa, including both Tanzania and the Democratic Republic of the Congo, covers almost the entire southern half of the continent. But as the article notes, DR Congo is more commonly placed in Central Africa while Tanzania is usually classified as part of Eastern Africa. As a result, the article goes on to outline an informal, “geographic” Southern Africa of “general usage.” This region essentially takes in everything south of DR Congo, including all of the islands of the western Indian Ocean (Madagascar, Mauritius, Reunion, Comoros, Mayotte, and Seychelles).

In actuality, “general usage” is much too variable to constitute any precisely defined “Southern Africa.” Many sources exclude the Indian Ocean islands, due both to their insular locations and to their distinctive cultural histories. Others seem to pick and choose countries at will, as revealed by the selection of maps culled from an internet image search for “Southern Africa map.” One view of the region adds Zimbabwe to the UN five, another adds Mozambique, another tacks on Zambia as well as Mozambique and Zimbabwe (while apparently excluding Lesotho and Swaziland), another includes all of these countries as well as Malawi and the British Atlantic territory of St. Helena, another takes in Madagascar and environs as well, another subtracts the islands while incorporating Angola and Tanzania, another extends as far north as Kenya, and yet another encompasses even Uganda. A few map of the region, moreover, deviate from the state-based framework. The Southern Africa of South African bird watchers, for example, includes southern but not northern Mozambique. The most aberrant example that I have found, the “walking safari map of southern Africa, takes in most of Zambia, most of Zimbabwe, part of Botswana, and nothing else.

Directionally defined geographical regions tend toward ambiguity. At the global scale, even so basic a term as “the West” can refer in some contexts to an area no larger than northwestern Europe, yet in others can take in almost half of the world (see the discussion in The Myth of Continents). Similar discrepancies are encountered in regard to the global South, East, and North. Directionally labeled regions defined from a particular vantage point tend to be particularly slippery. The “Middle East,” for example, is in the “middle” of the “the East” as seen from London or Paris; as result, Morocco and Algeria are by definition excluded from the region; due to cultural considerations, however, they often slip in nonetheless. Historical change can also generate spatial slippage; the area that is now called the Middle East is deemed the Near East when it comes to studies of the ancient world, when the core of the West is regarded to have been the Greek and Italian peninsulas. The same deviation can apply to sub-national regions as well; in the United States, the Midwest is not located in the middle of the West, but rather entirely to its east.

Most of the time, such ambiguity is of little account, as it hardly matters exactly what area is referenced when one writes about “Southern Africa” or “the West.” In some circumstances, however, such terms are applied with precision, which can result in confusion if one remains unaware of the fact. Just last month, for example, I received a letter from a prospective graduate student interested in studying Cambodian history through Stanford University’s program in South Asian Studies. I had to inform him that as far as academia is concerned, Cambodia is located not in South Asia but in Southeast Asia, and that Stanford has no program to speak of in Southeast Asian Studies. He did not write back.

Due to such potential confusion, it might prove beneficial to have a mutually agreed-upon set of such regional designations, at least for scholarly purposes. I would find it useful, for example, to be able to deploy such terms as “Southern Africa” in an exact sense, taking for granted that educated readers would understand what part of the world I am referencing. But no such unambiguous divisional system is available. One might consider using the United Nations’ “geoscheme,” but it is too idiosyncratic to be of much utility, as it expands Eastern Africa beyond recognition, places Iran in “Southern Asia,” classifies Mexico as part of Central America, and so on. The most glaring infelicity in the UN scheme is its inclusion of South Sudan in Northern Africa. By no reasonable criterion does South Sudan belong in this region. To begin with, the new country is located much closer to the center of the continent than to its northern coast. One could even argue, moreover, that its very non-North-African nature led South Sudan to seek and gain independence from the Khartoum regime. One can only hope that the U.N. will reassign South Sudan to Central or Eastern Africa, either of which would be a far more appropriate designation.