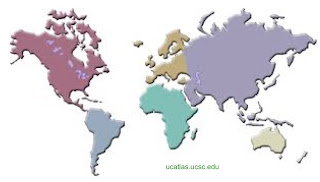 The World Bank is not the only organization to misemploy the Mercator projection for basic world maps. In a Google image search of “world map,” roughly a third of the initial set of maps returned greatly inflate the high latitudes. Not all, however, grotesquely exaggerate Greenland; one particularly unsightly map, reproduced above, solves the problem by erasing the island. The most egregious misuse of the projection is perhaps found in television newscasts in the United States. Here Mercator’s world image seems to serve as an icon of global breadth, adding gravitas, if counterfeit, to the stories of the day. The image is so emblematic of respectability that a caricature version is employed by the satirical Daily Show. In the image above, a gargantuan Canadian archipelago crowns Jon Stewart. Note as well the attenuated and misshapen depiction of India, the slug-shaped Japan, and the numerous non-existent land bridges. 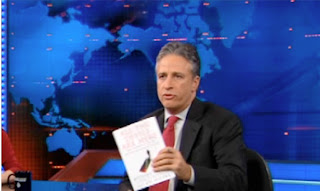 The Mercator projection was designed by its creator for shipboard use, the title of the original map telling us as much: Nova et aucta orbis terrae description ad usum navigantium emendate et accomodata (“new and improved description of the world amended and intended for the use of navigators”). Critical thinkers have long noted the absurdity of using Mercator projections for general purposes. In 1943, the New York Times opined that, “We cannot forever mislead children and even college students with grossly inaccurate pictures of the world.”* Yet mislead them we still do, although to a lesser extent than in the mid-twentieth century. 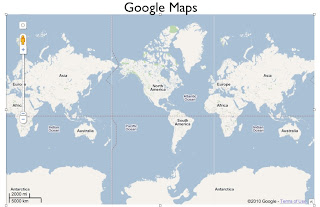 That is not to say, however, that the only appropriate uses of the projection are navigational. Google Maps, for example, employs Mercator’s perspective because it retains the correct shape of landmasses at any scale of resolution. (Or, as the Wikipedia puts it, “Despite its obvious scale variation at small scales, the projection is well-suited as an interactive world map that can be zoomed seamlessly to large-scale (local) maps, where there is relatively little distortion due to the projection’s near-conformality.”) As a result, Google Maps are quite serviceable for local or regional uses, but at the global scale they are worse then useless, depicting Ellesmere Island (population 146) in the Canadian arctic, for example as roughly the same size as Australia.

A considered defense of the Mercator projection is found in Andrew Taylor’s The World of Gerard Mercator: The Mapmaker Who Revolutionized Geography (2004, Walker & Company, New York). The book is well written and well researched, recommended to anyone interested in the history of cartography. Taylor’s vindication of his subject’s famous projection, however, is poorly considered. He embraces the Mercator projection for general purposes essentially because it is widely embraced: “It is Mercator’s map that appears on schoolroom walls, in diaries and magazines, and, most important of all, in peoples’ minds. That approval is the ultimate democracy” (p. 255). Such claims are extraordinarily anti-intellectual; if nonsense is widely held, we are told, it should be celebrated, as anything else would be an anti-democratic insult to the will of the people.

Epistemological populism, which equates truth with popularity, is a rare and extremist stance. It is difficult to imagine its claims being made so boldly in fields other than geography. When it comes to geography, however, lower standards often apply.

*The quotation is from Andrew Taylor’s book, referenced above.