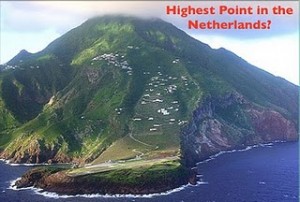 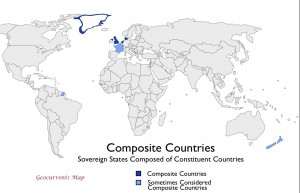 The modern Netherlands forms the heart of the so-called Low Countries, a historical region composed of the flat and watery delta formed by the Rhine, Meuse, Scheldt, and Ems rivers. As the name suggests, the Low Countries have no mountains. On WikiAnswers, the second-highest-rated response to the question, “What is the highest point in the Netherlands?” is simply, “Nope, we don’t have mountains. Large hills is the best we can do.” The first return, however, is strikingly different, referencing Mount Scenery, a precipitously sloped volcano that reaches 870 meters (2,800 feet) in elevation. Mount Scenery became the Netherlands’ highest point on October 10, 2010, when the Caribbean island of Saba, which essentially is Mount Scenery, was transformed into a “special municipality” of the Netherlands.

The incorporation of Saba, Bonaire, and Saint Eustatius into the Netherlands transformed the basic parameters of the country in several regards. The demographic change was relatively minor; the Netherlands’ population jumped by 18,000. More significant were shifts to the country’s geography; its southernmost and westernmost points were suddenly relocated by thousands of miles. The Netherlands also became, in part, a tropical land.

Such changes may seem trivial, but the reformulation of the Netherlands’ Caribbean holdings opens a fascinating window onto some surprisingly tricky issues of geopolitical conceptualization. What does it require for a formerly separate area to fully become part of a country—not just in legal terms but also in the popular imagination? No one doubts that Hawaii is fully part of the United States. Likewise, the French overseas departments, including Guadeloupe and Martinique in the Caribbean, are by all accounts integral portions of France. But Saba, Bonaire, and Saint Eustatius are “special” municipalities of the Netherlands, and remain distinctive in a more profound sense than that of sheer distance from the mainland. While the use of English as the language of public school instruction in Saba and Saint Eustatius is odd enough, it is the official status of the US dollar that really sets the three islands apart. The relationship maintained by the Netherlands proper with Saba, Bonaire, and Saint Eustatius is in some ways similar to that between China proper and its “special administrative regions” of Hong Kong and Macao, both of which have their own currencies. Although Hong Kong certainly falls under the umbrella of Chinese sovereignty, whether it is an integral part of China is another matter. It is not treated as such by the CIA, the World Bank, and other many other international agencies, and is instead accounted as a separate though subordinate unit.

Similar conundrums of geopolitical classification are posed by a number of other European outliers, starting with the Dutch anomalies of Aruba, Curaçao, and Sint Maarten. Legally defined as “constituent countries” of the Kingdom of the Netherlands,” these three islands are too autonomous to be counted as integral parts of the Netherlands (whose westernmost point is said to be Bonaire, not the more westerly island of Aruba.) Greenland is treated in a similar manner. Denmark is never regarded as including this “constituent country;” if it were, Denmark would jump to thirteenth rank in the standard list of countries by area. Yet the relationship between the United Kingdom and its “constituent countries” – England, Scotland, Wales, and Northern Ireland – is completely different, entailing much tighter linkages. Geographers would never think of excluding Scotland from a depiction of the United Kingdom the way we habitually exclude Greenland from Denmark.

In short, the concept of “constituent country” is inherently muddled, meaning different things in different sovereign states. Further extensions of the category provide no clarity. French Polynesia is sometimes described as a constituent country of France, just as the Cook Islands and Niue may be said to form constituent countries of New Zealand, yet none of these Pacific polities is legally defined in such terms. Officially, the Cook Islands form a parliamentary democracy in “free association with New Zealand,” which retains sovereignty. Yet the three countries that exist in similar “free association” with the United States (the Marshall Islands, the Federated States of Micronesia, and Palau) are all considered independent, and are in fact members of the United Nations.

The upshot is that the term “Netherlands” is now an inherently ambiguous geopolitical category. It might refer just to the European heartland, or it might include the three Caribbean special municipalities as well. But the “Kingdom of the Netherlands” explicitly includes as well as the three Caribbean constituent countries (Aruba, Curacao, and Sint Maarten). To put it differently, the Netherlands is not to be confused with the Kingdom of the Netherlands, of which it is merely one constituent country. And to make matters even more complex, the European portion of the Netherlands is often referred to in casual parlance as Holland, even though this term, strictly speaking, denotes only two of the country’s twelve provinces (North Holland and South Holland).

As always, the political division of the world turns out to be far more complex than it seems at first glance.