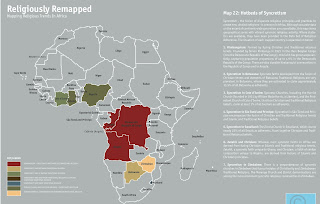 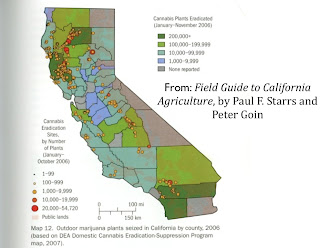 Geocurrents is not usually concerned with touting books or other websites, although requests for such consideration to do come frequently. But some works are so geographically impressive that they do deserve special mention. As a result, today’s posting will consider one website, Eugene Adogla’s Religiously Remapped: Mapping Religious Trends in Africa, and one book, Paul Starrs and Peter Goin’s Field Guide to California Agriculture.

Religiously Remapped shows what can be cartographically achieved with state-level data on religious observation. Eugene Adogla has gathered a tremendous array of statistics on religion in Africa, which he has used to generate a series of innovative maps. Most maps of religion in Africa do little more than separate Muslim from Christian areas. Adogla, however, shows how complex the situation really is, depicting even the distribution of such minor creeds as Rastafarianism and Eckankar. Adogla’s discussions of religious trends are also well considered, and well worth reading. (Disclaimer: Eugene Adogla is one of my former students, and Religiously Remapped was initiated several years ago as project for one of my courses at Stanford University.)

In their Field Guide to California Agriculture, geographer Paul F. Starrs and photographer Peter Goin have devised a new genre of writing. The book’s title hardly does it justice, as the “field guide” that it encompasses is embedded in a comprehensive, erudite, and eloquent disquisition on the history, economics, sociology and – above all – geography of agricultural production in what is arguably the world’s top farming location. It is, in a word, a masterpiece – one that should appeal equally to a broad public audience and to academic experts. The authors have an uncanny ability to hone in on topics of interest and significance, conveying their importance with precision and wit. Their book is both immensely informative and unfailingly entertaining.

This is unusual in a field guide. For geographically inclined readers, the genre is often exasperating. If one turns to traditional field guides with spatial questions in mind—where the range of one tree species begins and another ends, say, or where to find a particular kind of bird—it quickly becomes clear that the work provides little discussion of distribution. The focus is trained on identification, teaching readers to distinguish one species from another. Although I treasure my library’s field guide to North American mammals for its maps, I am perennially disappointed by the fact that it has more information on teeth than on range. How many readers are likely to trap small rodents and pry their mouths open? While marketed to a general audience, the book appears to have been designed for a professional field zoologist.

One could easily imagine a field guide to California agriculture written in the same technical spirit, focusing on diagnostic criteria. Detailed drawings or photographs would accompany bare-bones text, helping readers distinguish one crop from another in the field. For orchard crops, the emphasis would be tree shape, leaf form, and bark pattern, with a sentence or two about the crop itself thrown in for ornamentation. Such a work would be useful for classes in field geography and for curious drivers making excursions across California’s great Central Valley, but would be of limited interest to the general public.

Thanks in good part to the University of California Press, field guides have been evolving into a much more expansive form in recent years. Starrs and Goin, however, have taken the genre to a new completely new level, in both a scholarly and literary sense. To be sure, the book fulfills all of the necessary functions of the traditional field guide, aiding readers in crop and animal identification. Distinguishing features are listed for each entry, and an eight-page “agricultural product identification” guide provides a useful overview. If one is wondering, for example, whether an orchard contains walnut trees, guidelines are provided. As the walnut entry on page 216 puts it: “The utterly distinctive graft line where the English walnut slip was grafted onto a native black walnut rootstock … shows 6 to 24 inches above the ground: an instantaneous sign that this is a walnut…” But as is typical for the book, the key to walnut identification does not conclude so prosaically. Instead, the paragraph ends with an evocative tag: “The cicatrice is signature.” One does not generally turn to field guides for stylistic grace, but Starrs’ writing is at once eloquent and playful. One gets the impression that he had a great deal of fun writing the book, and his enthusiasm can be infectious.

The Field Guide to California Agriculture covers a staggering array of crops and livestock, from bok choi to oysters to cannabis. Each entry covers economic significance, spatial distribution, historical background, and issues of labor demand and farm management. The photos are plentiful and the maps are sharp. California’s share of the national harvest is duly noted for each entry, as is the market value. Obtaining the relevant numbers required considerable sleuthing for some crops. The marijuana entry is one of the most detailed in the book, as befits a crop that may well be worth more than all other California agricultural products combined. It is to Starrs and Goin’s credit that they tackle the issue head-on, writing about it with knowledge and verve.

The Field Guide to California Agriculture is divided into four main sections. The largest is an encyclopedia of crops and livestock, forming the field guide proper. The volume begins with a 70-page historical overview, and concludes with a similarly comprehensive essay on agricultural regions. These book-ends could together form a book on their own. The second section is a luscious photographical gallery aptly titled, “The Paradox and Poetics of Agriculture.” With enlargements and additions, it too could stand alone. Packaged together with the individual crop entries, they add up to a tour de force.