Racial Classification, H. J. Fleure, and the Decline of Geography 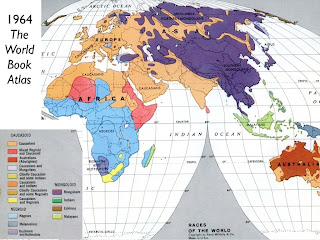 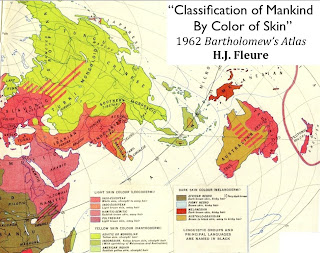 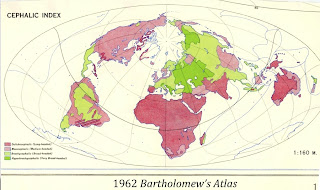 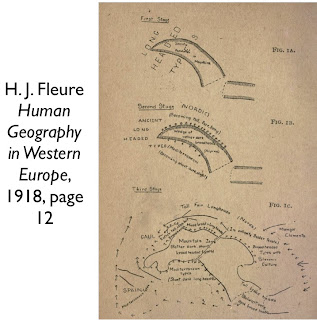 In scanning “races of the world” maps in atlases published before 1970, I am taken aback as much by the basic errors in world geography as by the crudity of the racial classification. Consider the first map above, derived from a Rand McNally original and printed in my own childhood companion, TheWorld Book Atlas (1964). It is better than some, as it does not purport to show skin color and does not portray Finns as Mongolians. But it does depict the Taiwanese as “Malayan.” The Taiwanese “aborigines” can indeed be so classified by linguistic and perhaps genetic criteria, but they constitute only two percent of the island’s population. Taiwan has been overwhelmingly Chinese for several hundred years, as anyone responsible for making a world map should know. Yet this misleading map came with the imprimatur of two major institutions of geographical education.

The race map from the 1962 Bartholomew’s Atlas, posted here last week and again today, is worse. It would be too tedious to recount all of the geographically misplaced ethnic/linguistic labels on this error-ridden map. To cite just one among their many egregious mistakes, the cartographers made it appear that Russians were largely confined to European Russia, not acknowledging that they extend beyond Lake Baikal in south-central Siberia. Not to know that the Russian cultural zone reaches Vladivostok on the Pacific should have disqualified a person from teaching world geography in 1962, let alone from providing a reference map in an authoritative world atlas.

Yet the editorial consultant for the map, whose name is proudly advertised on the same page, was one of the most celebrated geographers of 20th century Britain, Herbert John Fleure. Fleure, noted also as a zoologist and anthropologist, was secretary of the Geographical Association, editor of Geography, and recipient of numerous geographical awards and honors. He made his reputation largely by writing about race; his books included The Races of Mankind (1927), Racial Evolution and Archaeology (1937),and The Races of England and Wales (1923). Fleure, like many scholars of the time, saw the larger patterns of history and human geography in racial terms, and he located the key to race in skull shape and skin color. His works are filled with reference to aggregations of “broad-heads,” “longheads,” and peoples with intermediate heads, which he saw as the principal actors of European history:

The old fair-haired hunters of the forest, with their restless energy, might be partially ousted, but they remained as warriors and organisers, as the comrades-in-arms who founded an aristocracy loving the chase and the old habits of life. They made wars for grouping the agriculturists, for theorganisation of what should one day bestates, but the scheming, on the large scale, appears often to have been the work, not so much of them, as of a remarkable type intermediate between them and the broad-heads of central Europe. (Human Geography in Western Europe, p. 23-24)

Despite his racial obsession, Fleure was not a racist by the standards of the day. He disdained the notion of racial superiority and had no use for exclusivity, arguing that “If a nation is composed almost entirely of one race, the people will thus tend too much to the same activities and disabilities” (ibid, p. 235). As Tony Kushner has shown in a recent article, Fleure was “a strong and genuine opponent of the Nazi regime who made great efforts to help its Jewish victims, both by providing refugees with support and by giving lectures and writing articles attacking antisemitism and the concept of ‘Aryanism.’”

But as Kushner goes on to note, Fleure never abandoned race as his unifying framework, undermining his own intellectual legacy and weakening geography as a field of study. By the post-WWII era, the notion of discrete races existing in England and Wales was quaint if not reactionary. By the time Fleure edited the racial map posted above (at age 85), the very concept of biological race was being challenged by Ashley Montagu and others,* who pointed out that the various racial indicators (skin color, head shape, nose dimensions, hair texture, etc.) tend not to coincide with each other but rather to have disjunct distributional patterns. Fleure’s own mapping showed as much: just below his map of skin color in Bartholomew’s Atlas of 1962 is a markedly different depiction (posted above) of physical differentiation, based on cephalic index (head shape).

During Fleure’s heyday, geography aimed to span the world, which meant that leading geographers had to be able to operate at the global scale. Fleure was no exception, editing world maps and writing on the “Races of Mankind.” His heart, however, remained in Western Europe, particularly France, Britain, and his native Guernsey. His favored racial scheme was geared toward European history, as the all-important “broadhead/longhead” distinction meant little in many other places. By the 1960s, Fleure’s knowledge of the word at large was seriously out of date; if the first map above is any indication, it was never adequate in the first place. Yet a major atlas publisher still proudly advertised his portrayal of the diversity of humankind in a map so amateurish as to be embarrassing. Such lax standards have much to say about the decline of geography as an academic discipline during the mid-20th century.

Racial categorization was not the only unifying theme for human geographers in the period before World War II. Its main rival and sometimes complement was environmental determinism, the topic of the next Geocurrents posting.