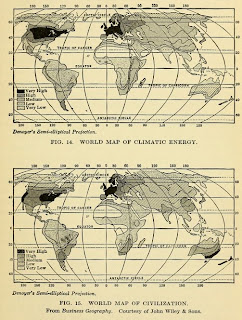 Geography is defined as “the study of the earth and its features.” Derived from the Greek for “earth writings,” geography traditionally focused on the world as a whole; investigations of smaller regions were a distinct if related branch of learning. For centuries, the main focus of geographical research was filling in the unknown portions of the world map. But as that task came to an end in the late 1800s and early 1900s, new research frontiers were sought. Many geographers turned to what was then a hot topic in social science: the racial differentiation of humankind. Others attempted to distill geographical laws from the age-old theory of environmental determinism, seeking global correlations among climate, soils, and landforms, on the one hand, and social, political, and cultural forms, on the other.

By the 1910s and ‘20s, environmental determinism was the reigning paradigm of geographical studies in the United States. Its leading theorists were Ellsworth Huntington and Ellen Churchill Semple. Ellen Churchill Semple, as we shall see in a forthcoming post, was the more impressive scholar of the two. Huntington’s arguments were often crude, and his central thesis was frankly without merit. If he wielded more influence, it was largely thanks to his connections and position at Yale University, as well as his gender.

Ellsworth Huntington was nothing is not prolific, writing on topics ranging from the global environment to business geography to Palestine. Yet he returned repeatedly to his pet theory, the idea that “climatic energy” determined human accomplishments. “Civilization,” in his view, could thrive only where allowed by climate. The ideal environment was a temperate one: free from extremes of heat or cold, yet blessed with a bracing seasonal contrast between winter and summer. Rainfall should be spread throughout the year, as prolonged dry seasons sapped both human health and mental acuity. Short-term alternations between wet and dry, on the other hand, were regarded as a positive force, refreshing the mind and spirit. Huntington translated these favorable conditions into numbers and then mapped them across the world. As seen in the map reproduced above, he concluded that climatic energy peaked in western Europe and northeastern North America. New Haven, Connecticut, where he made his home, was in the ideal range, making Huntington a lucky man indeed. Huntington next compared the map to one showing the “level of civilization.” Lo and behold, the two maps correlated nicely, supposedly substantiating the thesis.

In essence, Ellsworth Huntington’s took his own favorite climate to be the driving force of human history. But he allowed that climate did not determine everything. To begin with, the two maps did not correlate perfectly; some areas of “high climatic energy,” such as Patagonia, figured low on the civilizational chart, while some areas of poor climate, such as northern India, had achieved at least a modicum of accomplishment. And such discrepancies would have been more pronounced prior to the migration of Europeans to North America. The northeastern quadrant of the United States may have been climatically blessed, but it would not civilize until the right kind of people moved in. Race, in other words, mattered too.

Huntington ultimately sought to harmonize environmental and racial determinism, arguing that racial differences arose through natural selection propelled by climatic disparities and climate change. He often hedged his racial arguments, however, unlike those based on environmental features. Huntington also avoided the more virulent forms of racism common at the time. He did not in fact put his own Anglo-Saxons at the top of the hierarchy, speculating instead that:

The Jews are probably the greatest of all races. Has any other so persistently produced an almost endless string of great men for three or four thousand years? Has any other produced so many great men in proportion to its number? Certainly no other, unless it be the Chinese, has so consistently maintained a prominent position for millennium after millennium (The Pulse of Progress, 1926, p. 174).

Although environmental and racial theories dominated much academic discourse through the 1920s, they were increasingly challenged, denounced as both prejudicial and reductionistic. One of the most withering critiques came from Franz Boas, a German-born scholar who had switched from physics to geography after receiving his doctorate. Conducting field research on the environmental determinants of Inuit (Eskimo) culture on Baffin Island, Boas underwent an intellectual transformation. He now came to think that culture had to be understood in its own terms rather than in those of nature, and that tribal people were in no way intellectually inferior to others. Faced with poor job prospects as a geographer in Germany, and despairing at his country’s growing nationalism and anti-Semitism, Boas decamped for the United States near the turn of the century. He also changed disciplines again, in the process essentially founding the field of American cultural anthropology. Boasian anthropology, based on cultural relativism and particularism, was effectively a direct rebuttal to Huntingtonian geography. By the 1940s, the intellectual tenor of the academy swung decisively in Boas’s favor. As cultural anthropology expanded in the United States, human geography began to contract.

To be sure, environmental determinism encountered other obstacles as well. Where Huntington and like-minded geographers had stressed the limitations imposed by nature, such constraints seemed antiquated in the technologically optimistic post-WWII era. Air-conditioning alone seemed to many to go a long way to erase the burdens imposed by enervating climates. All societies could achieve economic and social development, the new thinking proclaimed, if only they could adopt the correct policies and accumulate adequate capital. To insist that climate or soil, let alone race, precluded progress over much of the world now seemed bigoted, unimaginative, and unduly pessimistic.

Academic geographers responded to this changing intellectual environment, but not always in an effective way. The field as a whole jettisoned geographical determinism so thoroughly that anything hinting of the doctrine came to be regarded as an intellectual sin. Geographers turned on their own forebears and cut off their own roots. Huntington was cast aside, but so too were far more able scholars of his generation, including the formidable Ellen Churchill Semple.