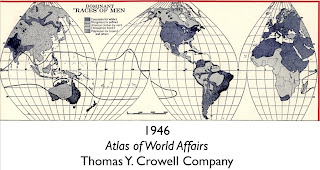 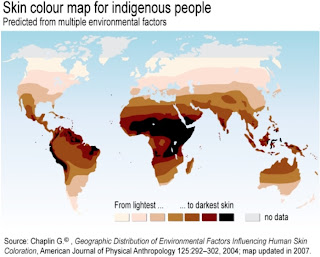 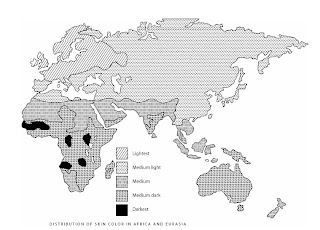 In the conventional narrative of intellectual progress, people of the past are said to have habitually deferred to authority, ignoring sensory evidence if it contradicted accepted wisdom. Galileo’s experiments and telescopes may have been intriguing, but to the extent that they contravened Aristotle or the Bible, they were discounted by those adhering to the old school. Intellectual modernity, by this way of thinking, consisted in large part of abandoning authority as a touchstone of knowledge, and correspondingly elevating evidence as perceived by the senses.

I suspect that this vision of intellectual transformation exaggerates the extent of change. Outside of the narrow confines of scientific research, the authority of the past continues to weigh heavily. How else can one explain the fact that atlases continued to depict Finns and Hungarians as yellow-skinned Mongolians well into the 1960s? All one had to do was look at them to see that their skin was not yellow, and their physical features “non-Mongolian.” For that matter the Mongolians themselves, like other East Asians, are far from “yellow” in skin coloration. They have been identified with yellow in large part because the Chinese traditionally associated that color with their country and their imperial dynasties, but it does not take a trained eye to detect that that there is nothing yellow in their pigmentation.

The baseless notion that a realm of yellow-skinned peoples extended from Finland to Japan was rooted in the authority of 19th and early 20th century physical anthropologists, who built elaborate theories of race based on flimsy evidence. But the cartographic persistence of this fantasy involved other factors as well. Global thematic maps are a challenge to construct – and when that challenge can be elided by copying, it often is. Map content cannot be easily copyrighted, and in practice, cartographers habitually crib from earlier examples, often perpetuating past errors in the process. Since exact copies would violate intellectual property rules, they tend to be slightly modified with each iteration. Such modifications, in the hands of an able mapmaker, can producing more accurate depictions than those found in the earlier models. But they can also do the opposite; careless cartographers may fudge boundaries in arbitrary directions.

Consider, for example, the first map posted above, taken from the 1946 Atlas of World Affairs.* Here one finds, as usual, most of Finland, Hungary, and Turkey mapped within the “Mongolian (or yellow)” race. More amusing is this map’s depiction of eastern Africa. Classifying Ethiopians and Somalis as white was common enough at the time, but this map goes a step further, portraying the inhabitants of Uganda, southern Sudan, and northeastern Congo as well as “Caucasian (or white)”. In actuality, the southern Sudanese are among the world’s darkest people. The only explanation that I can imagine is sloppy copying from other maps.

Maps as ridiculous as the one of “race” in the Atlas of World Affairs no longer circulate widely. The internet, however, facilitates other forms of cartographic mischief. Misleading maps are often copied from website to website with no critical commentary. Matters pertaining to human appearance can be especially problematic. Try running a Google image search of “skin color map.” When I did so this morning, the second map posted above was the most common image returned by a wide margin. Almost all the websites that use this map take it uncritically as an accurate depiction of skin coloration across the globe. On the sites that allow comments, however, some criticism is vented. Commentator Cesare on Centripetal Notion, for example, colorfully contends that:

This map shows some big mistakes. First: as an italian i say that our skin colour is definitly not the same as central europeans because we are darker. Second: in the united states most white people are as white as nord europeans so its another mistake in colouring the map. Third:I went to Iran and saw that the people there are really not as dark as other middle eastern folks. So [f**k] the person who made this map and let him travel more to other countries and let him take a better look at the people. Ciao!!

Cesare makes some good points, but he is off-base in criticizing the map itself rather than the manner in which it has been misused. The original map, as its seldom-reproduced full title indicates, does not depict actual skin color found across the world today. To begin with, its subject is “indigenous peoples” rather than those who ancestors recently crossed the seas; Euro-Americans and Euro-Australians thus do not figure. But more importantly, rather than describing actual skin color, this map denotes the pigment that scientists would expect humans in each region to develop, based on solar radiation and other “environmental factors.” The real epidermal hues of indigenous peoples deviate markedly from the predictions—a fact that the authors of the original map well understood. Most obviously, residents of the Congo Basin are much darker than the indigenous peoples of western Peru or northeastern Brazil, as can be seen on the third map posted above (which does purport to depict the actual skin colors of indigenous peoples).

Map four, from Wikipedia, has its share of problems as well. For example, it shows the people of peninsular Malaysia as darker than those of central New Guinea, which is simply not the case. The mapping of Africa also has some odd features that fail to mesh with other cartographic portrayals of skin color in the region. Compare, for example, the depiction of the area to the northwest of Lake Victoria on maps three and four; on the third map, it is shown as one of the lightest-skinned regions of sub-Saharan Africa; on map four, as one of the darkest.

Such discrepancies seem to derive largely from copying errors. Almost all world maps of human skin coloration, including maps three and four above, derive from Renato Biasutti’s Razze e Popoli dela Terra, published in the mid-1950s in Turin, Italy. Some cartographers have copied Biatsutti’s maps more skillfully than others. But given that the information used to make the originals was gathered before 1940, we would do well to question the quality of the data itself.