The Elaborate and Curious Geographies of Frank Herbert and J. R. R. Tolkien 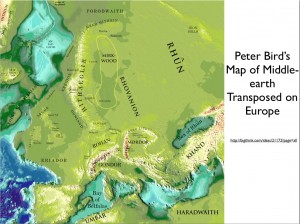 According to most sources, the best-selling science fiction novel of all time is Frank Herbert’s Dune. When it comes to fantasy literature, nothing compares with J. R. R. Tolkien’s Lord of the Rings. Both works build intricate worlds, giving obsessive attention to detail. Such elaboration proves compelling to many readers, providing what seem to be fully realized alternatives to Earth. Yet in terms of their basic geography, Herbert’s Arrakis and Tolkien’s Middle-earth fail to cohere as real worlds.

Arrakis of Dune, like most Star Wars worlds, is a single-environment planet. It is entirely and absolutely desertic, experiencing no rainfall. Unlike the desert orbs of Star Wars, Arrakis is fleshed out as a complex ecological system. As a result, Herbert was lauded as planet-building pioneer and an ecological visionary. As the New York Times book review noted, “So completely did Mr. Herbert work out the interactions of man and beast and geography and climate that Dune became the standard for a new sub-genre of ‘ecological’ science fiction.” The Wikipedia article on the author goes to note that, “As popularity of Dune rose, Herbert embarked on a lecture tour of college campuses, explaining how the environmental concerns of Dune’s inhabitants were analogous to our own.”

In actuality, the “environmental concerns of Dune’s inhabitants” were nothing at all like our own, largely because the imagined ecology of their planet was impossible, violating the tenets of biology at every turn. Arrakis is supposed to support some of the same desert vegetation as Earth (date palms, saguaro cactus, and so on), yet it gets no rain and has no standing water. In earlier epochs, we learn, Arrakis had been a humid planet, but its oceans were sucked dry by an introduced species that “encysted” virtually all water in “living cisterns” deep below the surface. Other similarly wild eco-fantasies follow, but recounting them seems pointless. Suffice it to say that Herbert’s alternative world is carefully constructed, wildly imaginative, and largely illogical, typifying the romantic sensibilities of the 1960s counter-culture.

The counter-culture of the 1960s also embraced the work of Tolkien, although the Lord of the Rings derives from a different sensibility, that of anti-modernist Christianity. Like Herbert, Tolkien was an extraordinarily inventive, detail-obsessed author who created his own intricate alternative universe, only glimpses of which are revealed in The Hobbit and Lord of the Rings. Yet in terms of its basic geography, Tolkien’s world-making endeavor was not adequate to the task.

It is perhaps unfair to take on Tolkien for the failure of his world-construction program. Tolkien’s imagination, after all, was mythological thwarting the development of realistic geography. He depicted his imagined world, for example, as having originally been a flat disc orbited by the sun, moon, and other celestial objects. Here mountains were raised not by gradual geological processes but by the precipitous actions of demiurges: “Melkor raised the Misty Mountains to impede the progress of the Vala Orome as he hunted Melkor’s beasts during the period of darkness prior to the awakening of the Elves.” Tolkien also gave short shrift to basic planetary description. Although his mytho-historical back-story covers eons of time and fills heavy volumes, he never bothered to “finalize the geography for the entire world associated with [his novels],” according specialized “Lord of the Rings Wiki.”

Assessing Tolkien’s depiction of an alternative world is further challenged by the fact that that it was not actually a different planet. His stories take place on Earth itself, as visualized in a different period of time—or more precisely, a different period of the imagination. All action plays out in northwestern “Middle-earth,” a continent that would eventually be transformed into Eurasia. In Tolkien’s elaborate para-cosmology, the intertwined planets of the solar system are deemed Arda, and Earth itself is called Ambar (or Imbar). Tolkien’s cosmology is pre-Copernican and non-scientific, embedding elements of ancient European mythology within a deeply Christian moral framework.

The general equation of Middle-earth with western Eurasia has led to the search for more specific correspondences. Tolkien always located the Shire in England, but otherwise remained vague on this score. A map by Peter Bird, however, depicts specific linkages. (Bird is a geology and geophysics professor at UCLA; his map was posted by Frank Jacobs on Strange Maps, and is reposted here.) According to Bird’s interpretation, the evil land of Mordor is located in Transylvania, yet again demonizing a perfectly normal place. (I prefer to think of Transylvania as the birthplace not of Dracula, but rather of Unitarianism.)

Considering his pre-modern, anti-scientific sensibility, Tolkien can hardly be expected to have constructed a rigorous geographical foundation for his para-world. But he certainly thought of Middle-earth as a physical place, inhabited by organic beings, including humans. Such beings have physical needs, and if the story is to have the ring of believability, such needs must be met. Yet repeatedly in Lord of the Rings, major agglomerations of various species of “people” live in areas where they could not possibly have provisioned themselves, given their economies. Consider the vast underground cities—indeed, kingdoms—of the “dwarves,” beings who produced no food, trading minerals and craft objects to humans to obtain sustenance. Although a small caste of specialized miners would have been perfectly reasonable, an entire species in the same niche and building gargantuan subterranean cities is precluded by basic demographic considerations.

Whenever I raise such objections with my children, their response is simple: “magic: the same reason why Legolas’s quiver is always full.” This reliance on magic (if that is indeed the case) to resolve such mundane contradictions strikes me as a cop-out. Tolkien, after all, devoted extraordinary effort to building the history, mythology, and languages of Middle-earth. Here, his obsessive scholarly attention gives his alter-world a level of complexity unsurpassed by any other, surely one of the major reasons for its unparalleled success. But Tolkien was a philologist, not a geographer or historian, and his attention wavered when it came to the more commonplace aspects of actual existence.

Academic criticisms of Tolkien have tended to focus on his racism, whether explicit or implicit. Evidence for and against such accusations is discussed at length in a Tolkien Gateway article, and thus needs no rehashing here; suffice it to say that although troublesome racial imagery pervades his work, Tolkien’s letters show that he was by no means a hard-core racist, at least by the standards of his time. But his basic worldview was profoundly paleoconservative. Such a stance is evident in his rejection of science in favor of mythos, his association of technological progress with evil*, his male-dominated and sexuality-shunning social depictions, and especially his celebration of the political legitimacy of bloodlines. The notion of a “true king,” whose rightful position of power derives from direct descent from a storied monarch of old, was reactionary long before Tolkien’s birth.

As a mythology creator, of Tolkien is unmatched. His characters are compelling, his stories are gripping, and his creation of languages is staggeringly impressive. His work proved powerful enough to essentially create a genre. Yet as much as I am drawn to Tolkien, I find his alter-world a grim and often repellent place that makes less sense the more it is scrutinized. It also strikes me as odd indeed that modern democracy-embracing audiences do not seem bothered by his retrograde depiction of an idealized human society.