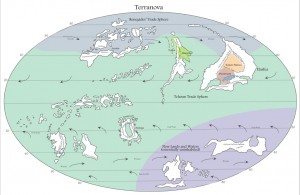 Map of the Imagined Planet Terranova, by M.W. Lewis

People are drawn to history and geography for various reasons. For myself, the major appeals have always been variety and complexity. I find variations in physical environments, social organizations, and belief systems intrinsically interesting. Obscure cultures, places, and times have particular appeal, as they help break the spell of the commonplace. It is all too easy to assume that one’s own cultural milieu is natural, with others deviating from the norm. By the same token, it is easy to regard familiar climates and landscapes as better than non-familiar ones. Such a blinkered imagination is conspicuous in the history of geographical thought, where environmental determinists have almost always located the ideal climate and landscape in or near their own homelands.

Geographical and historical study offers a potentially powerful antidote to such parochial thinking. In different places, one learns, people do things differently, and often do them quite well. And the past is very much, in this sense, a foreign country. The more widely one surveys, the less inevitable the beliefs and arrangements of one’s homeland seem. The same is true in regard to language; the monolingual person often views the grammar of his or her mother tongue as inevitable, and many are shocked to find that other languages do not just use different words, but encode information in fundamentally differently ways. But whereas some are shocked and delighted, others are shocked and horrified; more than a few native English-speakers find noun cases almost diabolical. In the same manner, exposure to foreign ways only solidifies some people’s sense of their own superiority. But at least for those who enjoy travel and reading about other places, the encounter with difference usually has a positive effect.

Science fiction and fantasy literature allows one take the “defamiliarization” of vicarious travel several steps farther. One can imagine arrangements distinct from any found on Earth, whether at present or in the past. An imagination sufficiently disciplined can convey an air of reality to such make-believe, expanding the realm of the seemingly possible. The master of this form of art, to my mind, is Ursula K. Le Guin, author of a several influential and astute science fiction novels. I doubt that it is coincidental that Le Guin’s mother was a noted writer and her father one of the founders of American anthropology (Theodora and Alfred Kroeber). She was evidently well schooled in the human sciences, lending her works a degree of believability despite their imaginative departures from reality as we know it.

As can probably be deduced from the preceding paragraphs and posts, I was once an avid consumer of science fiction and fantasy. I was never obsessive about it, as history and geography always came first; to my mind, descriptions of real places and peoples provide basic sustenance, while imaginative fiction serves best as a dessert course. Yet as I grew older and my education deepened, I found such works growing less delectable. As often as not, novels in the genre failed to convey an aura of believability, based as they were on impossible geographical circumstances. In consuming speculative fiction, of course, one does have to suspend disbelief; impossible things—such as faster than light-speed travel—are often necessarily depicted as routine. But while I had no problem suspending disbelief for the few crucial phenomena necessary for the framework to hold and the story to unfold, I could no longer suspend it across the board. I could not simply pass over unintentionally absurd constructions, those derived more from ignorance than artifice.

My response to this crisis of the imagination was to focus more on my own alter-world. After thrilling to Tolkien as an adolescent, I resolved to build an alternative to Middle-earth, a place where my imagination could run as openly as his. For several years, the land that I eventually dubbed Terranova was a magic-filled but rather formless place, suitable mostly for juvenile play. But as the years went on, magic dropped away as geo-historical elaboration proceeded. I found diversion in imagining a realistic Earthlike planet, providing it with a narrative of historical development and an internally consistent set of social structures and cultural practices. Although I committed nothing to paper for decades, I did build a variegated planet of the imagination. My desire was to make it as complex as that of Tolkien, but otherwise to depart from Middle-earth as much as possible.

In developing an imaginative world, I faced what I came to think of as the paradox of verisimilitude. To serve as a believable home for human (or human-like) beings, such a planet must be much like Earth. But if it is too Earthlike, the exercise becomes pointless: why build another world just like the one that we inhabit? The best solution, it seemed to me, was to restrict the differences to a few crucial variations. That would allow one to explore the ways in which select distinctions might influence historical development. In such a manner, a planet of the imaginative might even become a locus for thought experiments in world history.

The particular differentiating features of Terranova will be the subject of the next GeoCurrents post, the final one in this series.