The Controversial Global Boom in Dam-Building and Hydroelectric Power 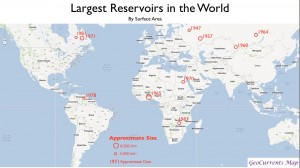 In scanning the global news for potential GeoCurrents posts, I am often struck by the repeated appearance of dam-building controversies.  The construction, or proposed construction, of massive dams has been a major issue of late in countries ranging from China, to Burma, Laos, Gabon, Ethiopia, Brazil, and Canada. The emerging Belo Monte Dam on the Xingu River in northern Brazil has generated world-wide controversy, with concerted opposition from environmental and indigenous-rights groups. As opponents note, the dam, which is will be the third largest hydroelectric facility in the world when completed, “will displace up to 20,000 people while diverting the Xingu River and flooding as much as 230 square miles [596 square kilometers] of rainforest in Brazil.” For the past several weeks, work has been slowed by a sit-in of some 300 Brazilian Indian activists; on July 11, however, the occupation was called off after the project’s organizers promised to “help monitor Indian lands to keep outsiders at bay and establish committees to monitor the environmental impact of the dam.”

Yet when it comes to truly massive reservoirs, the major surge of development ended a generation ago. As the map posted above shows, none of the world’s ten largest reservoirs (by surface area) have been built in the last 30 years. The projected flooding of almost 600 square kilometers of land by the Belo Monte dam may seem gargantuan, but compare that to the 8,482 square kilometers inundated in 1965 by Lake Volta in Ghana, formed behind Akosombo Dam. This huge lake almost dominates the map of Ghana. 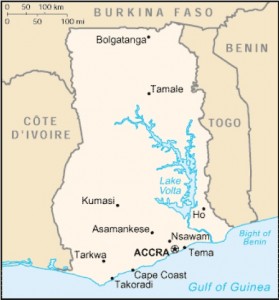 Lake Volta and the Akosombo Dam have been harshly criticized on environmental and human-rights grounds. Some 78,000 people were displaced by the rising waters. Fertile, river-bottom lands were lost, and the prevalence of bilharzia, river blindness and malaria increased. But the project has also delivered abundant, renewable power to Ghana and neighboring countries. Whether such power is adequate for the rapidly growing regional population of is another matter. As a recent report in GhanaWeb frames the issue:

It beggars belief that since the Akosombo Hydro Electric Dam was completed in 1966, we still have some Ghanaians in the villages and rural areas who are not connected to the national grid. Consider the fact that we cannot boast of any substantial manufactures yet our domestic demand for power far outstrips the supply.

One of the main problems with the Akosombo project is its relatively low power to size ratio. Although Lake Volta is the world’s largest reservoir by surface area, its generators produce only about 1,000 megawatts of power, which pales in comparison to the 22,500 megawatts generated by China’s Three Gorges Dam. Even the world’s 50th largest hydroelectricity facility, Iran’s Karun I, produces twice the power that Akosombo does. Dams are of course built for a variety of purposes, but Akosombo was designed specifically for power generation, focused initially on the aluminum smelting industry, with minimal provisions for irrigation, navigation, or flood control. Its power limitations are imposed in part by Ghana’s topography, which has relatively modest differences in elevation. 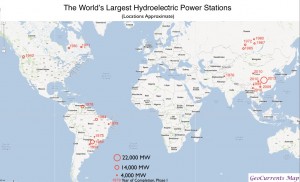 Over the past several decades, dam construction over much of the world has come to emphasize hydroelectric power generation more than it did in the past, focusing on large rivers with significant elevation drops. In such circumstances, relatively small lakes can lie behind dams with giant turbines. Compare, for example, the dates listed on the map of the world’s largest reservoirs posted above with those listed on the map of the world’s largest hydropower facilities, posted to the left. Most vast reservoirs were constructed decades ago, whereas many of the largest hydropower facilities have emerged recently. As can easily be seen, China has been a crucial player in this process. It is thus hardly surprising that Chinese firms have been instrumental in pushing the global dam building agenda, particularly in mainland Southeast Asia.

By global standards, even the largest reservoirs and hydroelectric facilities in the Unites States are relatively modest affairs. The country’s most extensive reservoir is Lake Sakakawea on the Missouri River, which covers 1,550 square kilometers, a figure that does not come close to making the global top ten list (the world’s tenth largest reservoir, Venezuela’s Lake Guri, covers 4,250 sq. km.) A similar situation obtains in regard to water volume. In this regard, the largest U.S. reservoir is Lake Mead on the Colorado River; its the capacity of 35.7 cubic km. is dwarfed by Lake Kariba’s 180 cubic km., found along the Zambia-Zimbabwe border. In regard to hydropower, the U.S. does have one dam in the top ten, fourth-placed Grand Coulee. Its 6,809 megawatt capacity, however, is not so impressive compared to the 22,500 megawatt capacity of China’s Three Gorges Dam. The next highest entry in the U.S., Chief Joseph Dam, also on the Columbia, ranks 28th. China has eight hydropower facilities larger than Chief Joseph, Brazil five, Russia five, and Canada four.

Most large reservoirs and hydroelectric stations in the United States, moreover, were constructed decades ago. The only major project completed in the past thirty years is the Bath County Pumped Storage Station in northwestern Virginia. The same year saw the initiation of the New Waddell Dam project in Arizona, the most recently constructed of the largest 120 reservoirs in the country. In the U.S., news stories about dams are generally about dismantling, not construction. 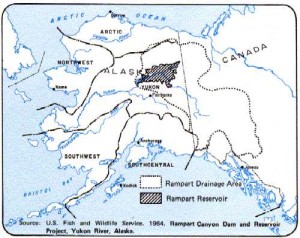 Yet at one time, much larger dams were envisaged for the United States. In the 1950s, the U.S. Army Corps of Engineers pushed the Rampart Dam on the Yukon River in Alaska, which would have created a reservoir more than three times the size of top-placed Lake Volta. The proposed dam was often linked to a vastly larger project, the North America Water and Power Alliance (NAWAPA), which would have re-engineered the hydrological system of much of the continent, entailing 369 separate construction projects and creating dozens of new reservoirs. In some versions of the project, most of the 990-mile long Rocky Mountain Trench in British Columbia would have been inundated. 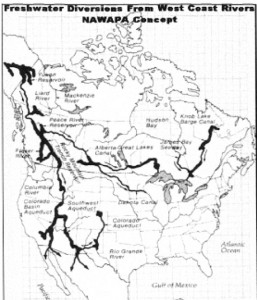 Mounting environmental and native-rights opposition finally forced the cancellation of the Rampart Dam project in 1967. In 1980, the area slated for flooding became the Yukon Flats National Wildlife Refuge, preventing any future revival of the plan. Environmental opposition, as well as widespread geopolitical hostility in Canada, led to the abandonment of the NAWAPA as well by the 1970s. NAWAPA still has its supporters, however, most notably the followers of the American political activist Lyndon LaRouche, who is often regarded as an extremist, a conspiracy theorist, and a cult leader. But if drought conditions persist in Texas and elsewhere in the United States, which many climatologists regard as a harbinger of things to come, the NAWAPA idea could be reawakened. Still, Canadian and environmental opposition—along with the astronomical price tag—would make any actual revival exceedingly difficult.

But if NAWAPA remains a pipe dream, other massive hydrological engineering projects seem much more likely. Feasibility studies are currently being conducted for the Grand Inga Dam on the lower Congo River in the D. R. Congo. Plans call for a hydroelectric plant of some 39,000 megawatts, almost twice the amount currently produced by China’s Three Gorges Dam. Beyond the Grand Inga project, the Congo River has vast hydroelectric potential, owing to its massive flow as well as its substantial drop along its lower course.  Approximately thirteen percent of the entire global hydropower potential derives from the Congo alone. If harnessed, the river could easily supply all of the electricity demand not just of the D. R. Congo, but of all sub-Saharan Africa. 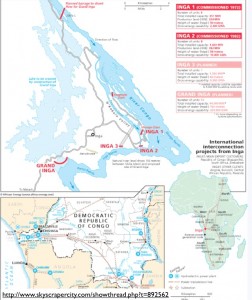 Owing to the prospects of such abundant power, many African leaders clamor for the Grand Inga project. South Africa, which sees itself as the continental leader, is deeply interested. As AllAfrica reported in November 2011, South African president Jacob Zuma then signed a Memorandum of Understanding with President Joseph Kabila of D.R. Congo, calling for South Africa “to facilitate the funding and construction of the Grand Inga Dam.” The AllAfrica article goes on to summarize the project in glowing terms:

The Grand Inga is a beautiful vision. Harnessing Africa’s raw power from the very centre of the continent, lighting up the heart of darkness with renewable, environmentally friendly energy, at the same time saving the precious rainforests which at the moment are the DRC’s only source of electricity.

Running power lines all through the continent, forcing countries to rely on each other for power, thereby removing and incentive toward the perennial conflict and war. Good for the environment, good for development, and good for peace.

It’s a pan-Africanist’s wet dream, if you’ll excuse the pun; and, with South Africa’s involvement, is closer than ever to being realised.

Such optimistic views, of course, are not universally held. Environmental opposition to the proposed project is pronounced, and will no doubt intensify if construction seems imminent. The environmental NGO International Rivers, for example, implies that Grand Inga is nothing but a grand illusion. But hydroelectric development actually presents a major paradox for environmentalism, as we shall see in the next GeoCurrents post.