(Note to readers: GeoCurrents will soon be taking a short summer break. Regular posting will resume in mid-August. But before the pause begins, I have one more post, which discusses the possibility of a seemingly impossible map. ) 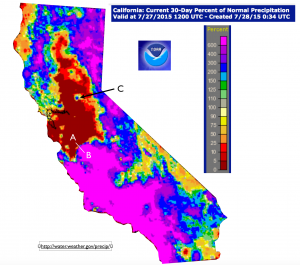 The map posted to the left appears to be bogus, as it depicts patterns that would seemingly not be found in nature. It shows precipitation over a specific 30-day period (from late June to late July, 2015) in California, mapped as a percentage of average precipitation, recorded over many years, during the same one-month span. Over a large swath of the central part of the state, colored dark red, rainfall is shown as having been extremely meager, less than five percent of what would normally be expected. Yet just to the northwest, northeast, and south of this region, large areas are depicted as having been extremely wet during this same period, with more than 600 percent of average rainfall. (This map, and the next three maps in this post, are found here.)

At first glance, such a pattern might appear highly unlikely but not actually impossible. What seems truly absurd is rather the lack of intermediate gradations. Along the “A-B” line that I have inserted only one intermediate color is encountered between the dark red of “less than five percent” and the hot pink of “more than 600 percent.” Such mapping seems to contradict the continuous nature of natural phenomena such as rainfall, and therefore appears impossible. Would not one have to pass through all of the color categories on the map when moving from a place with the highest value to a place with the lowest value? Yet as it so happens, that is not the case in this instance.

The most basic problem here is one of scale. Intermediate categories are present but cover areas too small to appear on the map. They would be present, in other words, if the map had been made at a much larger scale. Such a map, however, would be much too large to depict all of California on a single computer screen.

More interesting issues are encountered when we consider the specific features of California’s climate along with the unusual weather that the state experienced in mid July 2015 that led to such an bizarre map. 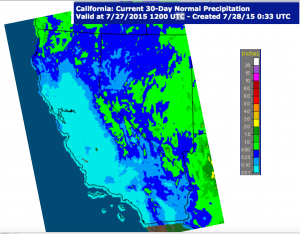 Over the lowlands and hills of central and southern California, July precipitation is essentially nil, as can be seen on the next map. Only over the highest mountains does average rainfall in this period reach 0.5 inches (12 mm). In the lowlands, most years see no rainfall during this time of the year. But every decade or so a rare rain event occurs, generating average rainfall totals of a couple hundredths of an inch. In Sacramento, for example, July precipitation averages 0.04 inches, but in most years the actual figure is absolutely nothing. As a result, the dark-red areas on the map that appear abnormally dry during this period actually experienced typical conditions. 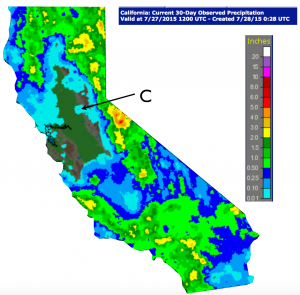 meager shower seem quite wet on a map such as this. The location near Sacramento labeled “C “is shown as receiving more than 200 percent of average rainfall on the fist map, but as the next map shows, all that it got was around 0.1 of an inch (2.5 mm).

The most striking feature of the initial map is the vast area that received more than 600 percent of average precipitation. Due to the hyper-aridity of California’s summer, some of these areas received only about a quarter of an inch. Other places, however, got more than two inches (50 mm), and one small area recorded over five inches (127 mm), staggeringly high figures for mid-summer in California. Most of this rain resulted from an unusual influx of moisture in the middle of the month from the so-called Arizona monsoon. The rainfall associated with this event pushed northward about halfway up the state and then abruptly terminated, giving rise to the extraordinarily sharp gradient along the “A-B” line in the first map. (In northwestern California, the relatively high precipitation figures for this period also reflect the unusual passage of an upper-level low-pressure center earlier in the month.) 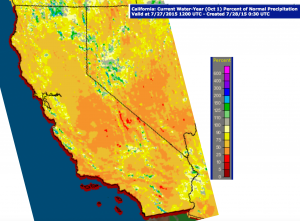 The rain that did fall in California this summer did very little to alleviate the state’s on-going, multi-year drought. As can be seen in the map posted to the left, almost all parts of the state are well below average for the period extending back to October 1, 2014. Oddly, however, there are a few specks of green and even of blue on this map, indicating higher than average rainfall. Palo Alto, where I live, is on the edge of one of these small zones, as it received unusually heavy rain during two December 2014 storms. 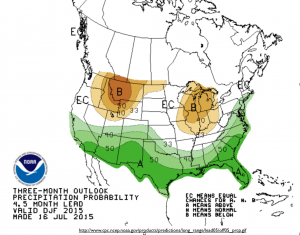 Drought-weary Californians are hoping that the El Niño conditions that have emerged over the eastern Pacific presage a wet winter. Climate prediction maps, however, indicate a good chance of a heavier than normal precipitation only in the southern two-thirds of the state. California’s vast water delivery system, however, relies mostly on precipitation that falls in the northern third of the state.