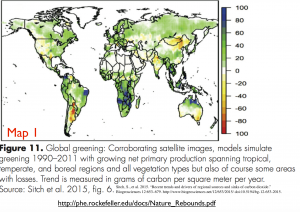 Several important studies, based mostly on remote sensing, indicate that the world is gaining vegetation. According to Jesse H. Ausubel, director of the Program for the Human Environment at Rockefeller University, such “global greening” is “the most important ecological trend on Earth today. The biosphere on land is getting bigger, year by year, by 2 billion tons or even more.”

Such global greening runs counter to common concerns about global warming, which stress the probable increase in drought, as well as the fact that higher temperatures mean increased evapotranspiration, which, all other things being equal, hampers plant growth in arid and semiarid lands. But over the world as a whole, a warmer world will also be also a wetter world, due to increased evaporation over the oceans, resulting in enhanced plant growth in many areas. Higher temperatures in cold-limited arctic and sub-arctic environments can also generate greener conditions. Higher concentrations of carbon dioxide, moreover, can bolster vegetation almost everywhere. As explained in the Wikipedia:

Plants can grow as much as 50 percent faster in concentrations of 1,000 ppm CO2 when compared with ambient conditions, though this assumes no change in climate and no limitation on other nutrients. Elevated CO2 levels cause increased growth reflected in the harvestable yield of crops, with wheat, rice and soybean all showing increases in yield of 12–14% under elevated CO2 in FACE experiments.

Although some writers argue that such global greening means that we need not fear climate change, most specialists take a more cautious stance. At a certain temperature level, any such benefits will be cancelled out. Increasing concentration of carbon dioxide is also linked to ocean acidification, which carries huge dangers of its own.

It is also essential to note that not all parts of the world have seen enhanced plant growth. Maps showing changes in primary production over the past several decades indicate that some areas have instead seen significant vegetative decline. The first map posted here, for example, shows significant “browning” in eastern Mongolia and adjacent parts of northern China, southeastern Australia, much of northwestern India, and especially the Chaco region of Paraguay and Argentina. It is not clear why these areas would run counter to the global norm, although drought is a likely culprit. In the Chaco, land clearing for agriculture might seem a possible factor, but other parts of South America that have seen similar land-use transformations are not mapped as having experienced a drop in primary productivity; agriculture, after all, can be quite productive. 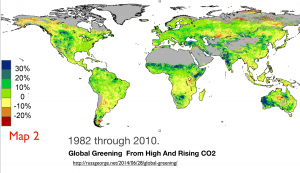 As I have been intrigued by such maps of the “greening Earth” for some time, I decided to run a simple test by comparing a number of such maps to see if they show the same patterns. My effort here is highly preliminary and certainly not up to scientific standards: all that I had time to do was locate six 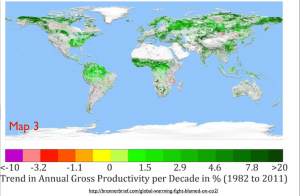 such maps by a simple internet search of “greening Earth,” without checking the original sources. These maps are not fully comparable by any means, as they cover slightly different periods of time and are based on somewhat different measurements. But that said, they are still roughly 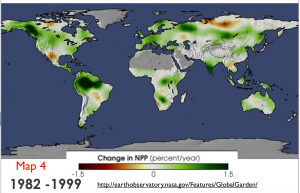 As it turns out, even the simplest comparison of these maps reveals major inconsistencies. Compare, for example, the depiction of south-central Africa 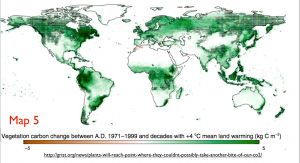 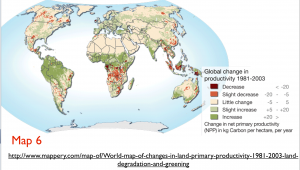 Map 6 could have occurred in the 1980s, while much of the increase shown in Map 1 could have happened after 2003. Such a scenario, however, seems rather unlikely. 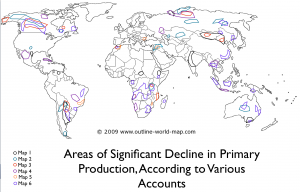 Overall, these six maps depict quite different patterns of greening and browning. To highlight the inconsistencies, I have crudely indicated all the various areas shown as having experienced primary productivity declines on a single map, color-coding them according to the map on which they are so depicted. As can be seen, substantial overlap occurs in only a few parts of the world.

As a result of this little “experiment,” my confidence in the idea that the Earth is generally greening has been shaken. If these measurements are accurate, should not we expect widespread agreement? My own investigation, however, is admittedly crude, conducted over the course of a single afternoon. Perhaps some of these maps are reasonably accurate while others are deeply flawed. Surely further investigation would be warranted.

If the world were to “green” so extensively that large expanses of what are now barren deserts ended up being covered with vegetation, the results would be mixed. Local productivity would soar, but the oceans could suffer – and so too could distant tropical rainforests. Many of the nutrients that fertilize plankton originate from dust storms over the

Sahara and other extreme deserts. Even the Amazon benefits from Saharan dust. The largest source of such nutrients is the former lakebed in northern Chad called the Bodélé Depression. New research, however, indicates that Lake Chad extended into this depression as recently as 1,000 years ago, raising questions about Amazonian fertilization in earlier times. As was recently reported in ScienceDaily:

“The Amazon tropical forest is like a giant hanging basket,” explains Dr Simon Armitage from the Department of Geography at Royal Holloway. “In a hanging basket, daily watering quickly washes soluble nutrients out of the soil, and these need to be replaced using fertiliser if the plants are to survive. Similarly, heavy washout of soluble minerals from the Amazon basin means that an external source of nutrients must be maintaining soil fertility. As the World’s most vigorous dust source, the Bodélé depression has often been cited as a likely source of these nutrients, but our findings indicate that this can only be true for the last 1,000 years,” he added.