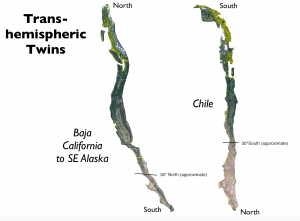 To understand the physical geography and scale of Chile, it is useful to compare it to its North American counterpart, a region that extends in the north-south direction from southeastern Alaska to Mexico’s Baja California Peninsula, and which is bounded to the east by highland crests. As I was not able to find any maps that made this comparison explicitly, I constructed my own in a somewhat crude manner using Google Earth images. I inverted the resulting map of Chile to keep each region in the same perspective, with the poleward extremity on the top and the equator-facing extremity on the bottom.

As can be seen, the resemblance is rather extraordinary. To be sure, some major differences exist. Chile’s desert region in the lower part of the map, for example, is much drier than that of Baja California. Corresponding climate belts are in general displaced somewhat toward the equator in Chile, as can be seen in the relative positions of the 30° latitude line on the two maps. Valdivia, Chile at latitude 39°, for example, has a climate similar to “the windward side of the Olympic Mountains in the Pacific Northwest region of North America” (according to its Wikipedia article), which is situated at around 47°. 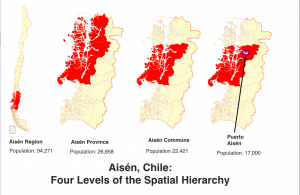 Chile’s Aysén (or Aisén) Region is situated in the same general latitude range as the states of Oregon and Washington in the United States, but is climate, vegetation, and landforms are much more similar to those of western British Columbia or southeastern Alaska. A little larger than Iceland, Aysén has only 94,271 inhabitants, fewer than live in Reykjavík, Iceland’s capital, giving it an extraordinarily low population density. Excluding indigenous inhabitants, it was also very recently settled. Its main port, Puerto Aysén was established in 1914 and not recognized as a city until 1928. (I find it intriguing that “Aysén” exists at four separate levels of Chile’s official spatial hierarchy, as can be seen in the map posted to the left.) 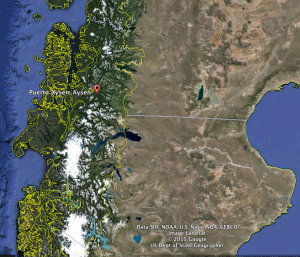 The terrain in western Aysén Region is not particularly conducive to heavy human settlement, given its steep slopes and intricate mixture of mountains and waterways. More favorable areas are found further to the east, especially around Coihaique, the region’s capital city (population 54,000). Coihaique is even younger than Puerto Aysén, having been founded in 1929. As the Wikipedia article puts it, “Until the twentieth century, Chile showed little interest in exploiting the remote Aisén region.”

The Lonely Planet description of Coihaique is interesting in regard its depiction of both the town’s appearance and its problems:

The cow town that kept growing, Coyhaique is the regional hub of rural Aisén, urbane enough to house the latest techie trends, mall fashions and discos. All this is plopped in the middle of an undulating range, with rocky humpback peaks and snowy mountains in the backdrop. For the visitor, it’s the launch pad for far-flung adventures, be it fly-fishing, trekking the ice cap or rambling the Carretera Austral to its end at Villa O’Higgins.

For those fresh from the rainforest wilderness of northern Aisén, it can be a jarring relapse into the world of semi trucks and subdivisions. Rural workers come to join the timber or salmon industries and add to the growing urban mass. In February 2012, massive citizen protests shut down the region and highlighted problems with poor public services and the high cost of living in Patagonia. The movement, known as Fuerza Aysén, expressed a growing frustration with the central government that remains unresolved. 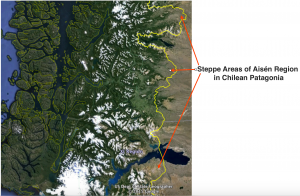 What I find most intriguing about Coihaique is its mere location on the east side of the Andes. I had always assumed that the Patagonian border between Chile and Argentina generally followed the Andean spine, with Chile occupying the wet west and Argentina the dry east. In actuality, Chilean 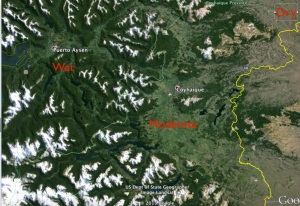 territory in several parts of Aysén Region extends well into the semi-arid steppe zone. The town of Chico Chile, for example, receives only 296 millimeters (11.6 inches) of rain a year. In Puerto Aysén the figure is 2,647 millimeters (104 inches). The Coihaique area, however, occupies an intermediate position, with annual rainfall of just under 1,000 millimeters, or 40 inches. Glasgow, Scotland makes a fairly close 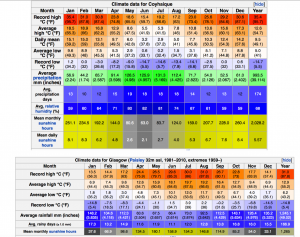 climatic analogue of Coihaique, as can be seen in the paired Wikipedia climate tables posted here.