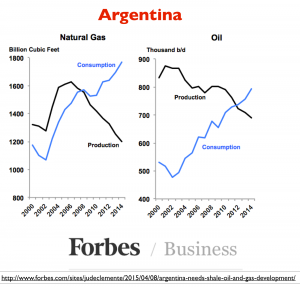 As noted in the previous post, the most economically productive areas of Argentina depend heavily on the extraction of oil and natural gas. Argentina, however, is not a major fossil-fuel producer, and its reserves of conventional oil and natural gas are modest. Although it still exports some crude oil and until recently sold large quantities of natural gas to Chile, Argentina has been a net importer of both gas and oil since 2011. Its economy is also heavily dependent on fossil fuels, with natural gas alone supplying 55 percent of its total energy supply. Considering Argentina’s high inflation rate and other economic difficulties, this situation generates considerable concern.

Argentina does, however, possess massive quantities of unconventional oil and natural gas. Such deposits are locked up in shale formations and are 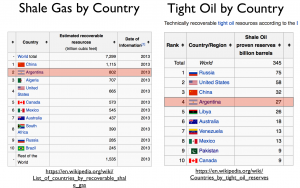 only economically recoverable through hydraulic fracturing (“fracking”). According to most estimates, Argentina’s shale gas reserves are second only to those of China, while its tight oil reserves are the world’s fourth largest. Most of the country’s shale gas and tight oil deposits are found in the Vaca Muerta (“dead cow”) formation, located mostly in Neuquén province. A year ago, optimism ran high in this region, as many experts predicted a boom similar to the one that had had emerged in the Bakken Formation of North Dakota. As noted in The Economist in 2014: 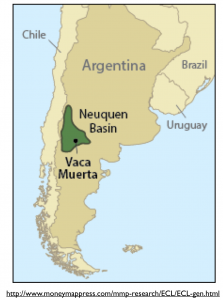 Neuquén is readying itself for a boom. Shopping centres have sprung up; so have clean new hotels that boast English-speaking staff and American-style food. Horacio Quiroga, the city’s mayor, compares its residents to expectant diners who have tied on their bibs. Argentina’s president, Cristina Fernández de Kirchner, is equally hopeful. “I shall no longer call [it] Vaca Muerta,” she said last year. “I shall call it Vaca Viva (‘Living Cow’).”

But at the same time, other observers were urging caution. Shale-gas deposits elsewhere in the world were proving more difficult to tap than those of North America, in part because of local geological particularities but also because of the large amounts of capital and high levels of technical expertise required for successful fracking. In most cases, substantial foreign investment would be necessary. Argentina’s history of fraught relations with overseas-based energy companies, however, has created major investment obstacles.

But despite such problems, significant investments have been made in in the Argentine energy field over the past several years. A recent report from the U.S. Energy Information Administration contends that outside of North America only China and Argentina have produced commercial volumes of gas and oil from fracking. As detailed in the report:

In Argentina, many international companies hold leases and have drilled wells in shale formations. Much of the initial activity has targeted shale oil and natural gas in the Neuquen Basin’s Vaca Muerta shale formation, located in west-central Argentina. National energy company Yacimientos Petroliferos Fiscales (YPF), the largest shale operator in the country, reported production in April 2015 of 22,900 barrels per day (b/d) of oil and 67 million cubic feet per day (MMcf/d) of natural gas from three joint ventures in Vaca Muerta: one with Chevron at the Loma Campana field, a second one with Dow Chemical at the El Orejano field, and a third joint venture with Petronas at La Amarga Chica field. In addition, China’s national oil company Sinopec and Russia’s national oil company Gazprom have recently signed a memorandum of understanding with YPF to jointly develop shale from the same basin.

Considering its economic difficulties, the Argentine government is not surprisingly eager to frack for natural gas and oil. The steep drop in the global price of oil over the past year, however, threatens the viability of the industry. Argentina has responded, as it often does, by manipulating the market. In particular, its government has fixed the local price of oil at US$ 77 a barrel, a figure almost twice that of the world market. Such policies aid producers, but harm consumers. As explained by Bloomberg Business:

South America’s second-largest* and most enigmatic economy is marching to its own drummer. In most of the developing world, governments subsidize fuel prices. In Argentina, motorists now are subsidizing oil and gas producers.

“This is not sustainable in the long term,” said Agustin Torroba, senior analyst at Montamat & Associates, an energy consulting firm. “It is the most expensive oil in the world.”

As is true elsewhere, fracking has generated considerable controversy in Argentina, as can clearly be seen in the website ASF Argentina Sin Fracking. Opposition to the process by Pope Francis has gathered considerable attention, both in Argentina and abroad. In eastern Argentina, many communities have instituted fracking bans. As was recently reported in Free Speech Radio News:

The red carpet treatment for foreign energy companies has met resistance in various parts of Argentina.

Authorities in around 50 municipalities have enacted local fracking bans in response to public pressure. This has, in turn, created a power struggle between national and local officials over what steps communities can take to prevent energy projects.

“We want to have the right to protect our water from pollution, to keep living in our hometowns,” says Ignacio Zabaleta with the Assembly of Fracking-Free Territories, a network of groups opposed to the extraction technique. “It’s a response to the sidelining of the will of the people. It’s about people who have lived in certain areas for centuries being displaced for the benefit of two or three corporations and for the benefit of corrupt and immoral officials.”

Most of the municipalities that have rejected fracking are in the province of Entre Rios, home to part of the Guaraní Aquifer — one of the world’s largest underground bodies of freshwater. The aquifer spans the borders of Argentina, Brazil, Uruguay and Paraguay.

Argentina will be holding a presidential election in late October of this year. Some observers think that the outcome could significantly influence the country’s economic and energy policies. A recent Stratfor report, however, argues to the contrary. Its forecast runs as follows:

* This assertion is questionable. Although most data assembled by international economic organizations place the Argentine economy above that of Colombia in both nominal and purchasing-power-parity terms, a 2014 International Business Times article came to a different conclusion:

Argentina, once the third-strongest economy in the western hemisphere, extended its decades-long decline by ceding the No. 3 spot among Latin American economies to Colombia later this year — thanks to the second-weakest currency in the region, soaring inflation, weak economic growth and chronic political problems, Capital Economics said on Monday. Brazil and Mexico remain No. 1 and No 2, respectively.