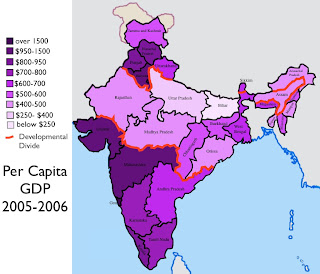 In the areas deemed “progressive India,” several states, most notably Jammu and Kashmir and Andhra Pradesh, show lower than average levels of per capita GDP. In Jammu and Kashmir, the depressed showing can easily be attributed to perennial insurgency and civil strife. Andhra Pradesh is rather more complicated. This state contains some of India’s most technologically advanced areas, notably the city of Hyderabad (nicknamed “Cyberabad”), as well as some deeply impoverished rural areas. Such disparities have contributed to a movement to split the state. In terms of social development, however, Andhra Pradesh as a whole has made marked progress, rising to near the top in some measures of well-being.

The economic map posted above also deviates slightly from the basic developmental pattern in its pronounced east-west division, with western India posting substantially higher figures overall than eastern India. This configuration results in part from the strong showing of the western state of Gujarat, which ranks much higher on per capita GDP than on most measures of social development. Along with neighboring Maharashtra, Gujarat is India’s main center of heavy industry; it produces 39 percent of the country’s industrial output and 67 percent of its petrochemicals. Although a number of its social indicators lag below those of southern India, it has recently made steady progress in enhancing basic human well-being as well. But Gujarat is also noted for its Hindu nationalism—and Hindu-Muslim tensions. A strain of Hindu puritanism runs strong here; among other indicators, Gujarat is India’s only completely “dry” state, having banned the sale of alcoholic beverages.

In India’s poor north-central region, West Bengal stands out for its relatively high per capita GDP figures, which come close to the average for India as a whole. As we shall see over the next week, West Bengal has a number of relatively high social development indicators as well, making its placement in the “languishing India” category uncertain. Like Gujarat, it is noted for its heavy industries, and it is beginning to make a showing in high tech as well; it has also long been one of India’s main intellectual centers. But West Bengal still has huge disparities of wealth and pockets of pronounced deprivation, despite the fact that it has usually been governed by Marxist political parties. A major divide in the state currently pits market-oriented communists—who want to follow the Chinese path of development by courting international investment—against their more traditional comrades. Meanwhile, labor unrest may be stalling economic growth. The Tata Nano, the world’s cheapest production car (with a base price of $2,160) was scheduled to be built in West Bengal, but violent protests led the company to transfer production to Gujarat.

Bihar comes in last in per capita GDP, as its does across a range of social and economic indicators. Numerous reports indicate that Bihar has at long last turned a corner, reducing its notoriously high levels of corruption and making progress on a number of fronts. The 2008-2009 data actually shows Bihar as having India’s fastest growing economy, its GDP surging 11.44 percent. Some observers, however, remain skeptical, noting that most of the gains have resulted from infrastructural spending by the central government. Doubts also persist in regard to the basic data. As one recent report concludes, “Relying on the state’s data to rush to any conclusion would call for a heroic leap of faith.”