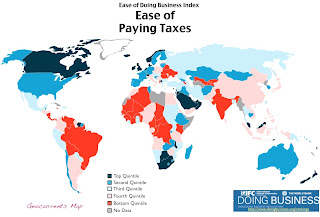 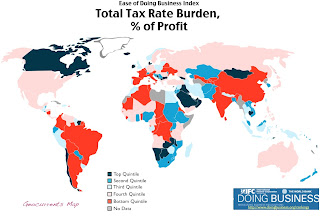 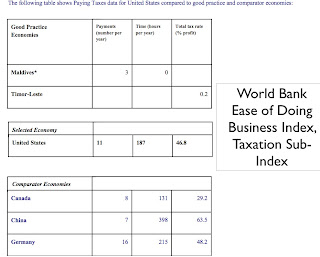 The “paying taxes” component of the World Bank’s Ease of Doing Business Index might seem to rest on more secure foundations than some of the other measurements, as governments have a strong incentive to acquire accurate tax data. The corresponding map, produced above, reveals some unusual patterns. Northern Europe gains a favorable ranking, as is usually the case, but it is joined in the first quintile by an odd assortment of areas, including most of the Arabian Peninsula and much of southern Africa. Unfavorable taxation policies are also found in a disparate set of locations, including much of Latin America, western Africa, central Africa, and eastern Europe.

The “paying taxes index” is based on three equal components: the number of payments required per year, the time required to file taxes, and the total tax rate. Giving equal weight to the tax schedule and the average preparation time seems odd; frequent filing need not be burdensome if procedures are simple. According to the World Bank’s own data tables, Armenian firms remit taxes five times more often than Brazilian firms, yet Brazilian firms must devote almost five times more total time to tax preparation than their Armenian counterparts.

As is true with the other sub-indices of the Doing Business poll, the three component measurements of “paying taxes” very substantially, yielding strikingly different maps. The number of annual payments varies from two in Sweden to 135 in Ukraine, whereas the total annual time burden for an average firm ranges from zero hours in Maldives to 2,600 hours in Brazil. How Maldivian firms manage to pay their taxes with no effort whatsoever is a mystery, as is the supposed fact that Brazilian companies must devote two and a half times more effort than their counterparts in the second lowest-ranking country, Bolivia. Also striking is the lack of correlation between the two indicators; many countries that require few tax filings demand major time investments, and vice versa.

The total tax rate, as a percentage of profits, might seem to be the most significant indicator of the overall tax burden on businesses. But determining the optimum level of taxation, whether for businesses or individuals, is not a simple issue. Most economists and political scientists agree that tax rates can be too low; all governments require revenue, and if they do not get it from taxation they must turn to foreign donors or the unsustainable flow of royalties from natural resources. According to the influential “resource curse” model, oil-rich countries with low tax regimes often fail to adequately develop linkages between the state and the citizenry; governments that remain financially insulated from their publics often suffer high rates of corruption and poorly developed civic institutions, sapping their potential for growth.

Boilerplate text in the World Bank’s “Doing Business” project seemingly concurs that some taxation is necessary: “taxes are essential to provide public amenities, infrastructure, and services which are crucial for a properly functioning economy.” In its tabulations, however, the Bank takes the ideal rate of taxation to be essentially zero. Its model country on this score is Timor-Leste (East Timor), lauded in every country’s “good practice economies” comparison for its minuscule total take on profits of 0.2 percent. Does the World Bank really regard aid-dependent, impoverished East Timor as having the ideal business taxation rate, with Iraq, Malawi, and the Palestinian territories not far behind? Such claims are preposterous.

The business tax data should not be taken at face value. The total tax rate category, the World Bank informs us, “measures the amount of taxes and mandatory contributions borne by the business in the second year of operation, expressed as a share of commercial profit.” Yet for seven countries, the figures exceed 100 percent; in the DR Congo, they are well beyond 300 percent. How could any firm stay afloat if it were so taxed? Perhaps actual tax rates are not really so high; perhaps rules are again being confused for realities.

All of the countries listed as having taxation rates of more than 100 percent are located in sub-Saharan Africa except Argentina, with comes in at 108.2 percent. In the Bank’s tax-rate breakdown, Argentina is shown as having a remarkably high (53 percent) “Turnover Tax* by City of Buenos Aires.” Presumably, such fees apply only to operations in Buenos Aires, but the World Bank apparently applies them to the entire country. And certainly firms in Buenos Aires have strategies for avoiding much of the official burden, as otherwise they could not remain in business. Such “unofficial” behaviors, however, do not figure into the index.

Statistics are often taken at face value, even though we have long been warned that they can be misleading. The World Bank is a generally respected and well-financed institution, and its Doing Business Index is closely followed across the world. Yet few critics take the time to delve into the data, examining what is actually being measured and how the measurements are being made. If one does so, one finds that that much of is based on obvious nonsense.