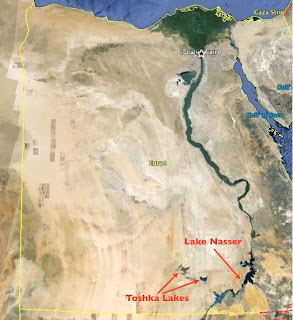 Dictatorial rulers often favor grandiose construction projects, on which they not uncommonly bestow their own names. Egypt has been no exception. The world’s largest water-moving facility is the Mubarak Pumping Station, located on an island in Lake Nasser. When such rulers fall from power, their names are often stripped away from such monuments. It will be interesting to see what happens not just to the name of the pumping station, but to the entire Toshka/New Valley Project with which it is associated. The Toshka scheme is certainly grandiose; whether it is sensible and sustainable is a different question altogether.

Some of the effects of the Toshka project are easily visible from space. In the 1990s, astronauts orbiting the Earth began to notice several vast lakes appearing in low-lying areas of the southern Egyptian desert west of the Nile Valley. The water filling these new lakes originated in Lake Nasser, the massive reservoir that sits behind the Aswan High Dam. When the lake reached a sufficiently high level, Egyptian engineers began shunting off excess water into the desert rather than letting it flow downstream through the Nile. By creating the new Toshka desert lakes, planners hoped to recharge depleted aquifers and to establish a new, more productive physical environment in an arid “wasteland.” 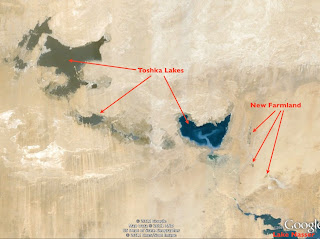 More important than the lakes were the irrigation facilities that followed. Plans were initiated in 1997 to create an intensively farmed “second Nile Valley” in the area between Lake Nasser and the Toshka lakes. More than sixty billion dollars have been earmarked for the project, which has entailed building not only the world’s largest pumping facility but also a gargantuan concrete main canal, a network of smaller irrigation channels, a road system, and a number of new towns. According to the former Egyptian government, the “New Valley” is supposed to increase Egypt’s farmland by ten percent and provide new homes for as many as sixteen million Egyptian citizens by 2020. The project is designed to significantly increase Egypt’s food supplies and relieve congestion in the Nile Valley and Delta, allowing some breathing room for a densely packed and still expanding population. 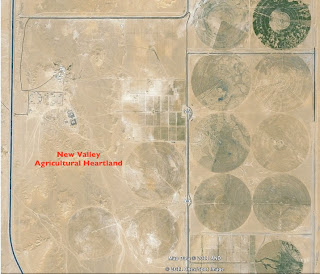 It is highly uncertain that such plans will ever be realized. The lakes are already in trouble. Studies show that relatively little water is seeping into underlying aquifers; most is lost to the intensive evaporation that characterizes the region over much of the year. The lakes are also rapidly becoming salty, threatening the fresh-water fauna that immediately established itself upon inundation. The very existence of the lakes, moreover, depends on excess water storage in Lake Nasser, which is itself dependent on unreliable summer downpours over the Ethiopian plateau. When run-off is short, as it periodically is, water must be reserved for the all-important Nile Valley. Indeed, by 2001 the lakes were already diminishing, and by 2006 one of the smaller lakes had dried up.

Far more important to Egypt’s economy is the future of the irrigated agricultural lands in the “New Valley.” The project has plenty of defenders, as is evident in the comments sections of the few internet news sources and blogs that have covered it in any detail. The engineering works are by most accounts well-constructed if not marvels of ingenuity and planning. Enthusiasts also point to the new farms that have recently appeared in the desert, providing much-needed food supplies to a country that was in 2009 the world’s largest importer of wheat. Proponents acknowledge that it will not be easy to attract migrants to the relatively isolated and still generally barren area. They argue, however, that higher wages, tax breaks, and enhanced social services – coupled with the overcrowding found in most of the Nile Valley – will ensure success in the long run.

Critics paint a different picture. Some call the project “Mubarak’s Pyramid,” a monument to ego and folly. Many worry that the heavy clay soils will lead to water-logging and salinization. As noted on the Free Copts website:

As an engineer, Jan Bron, the head of the Dutch team that co-ordinates the Water Boards Project in Egypt, recognises the Toshka Project as a great engineering feat, but he predicts the project will fail from a social point of view. “From an engineering point of view it is a great project: the largest pumping station in the world, the irrigation of millions of hectares of land… basically it is a playground for engineers. For now it is still justifiable and when it does finally go wrong, others will be in power. But the idea of sending the overflow of people from the Delta and the Valley to Toshka is delusional. I think the project will fail disastrously.” 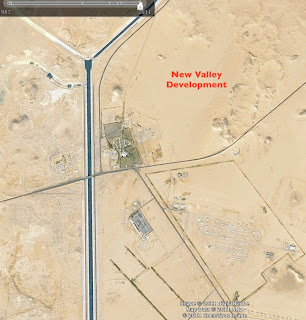 In exploring the area via Google Earth, I find that most evidence supports the critics. Satellite imagery seems to indicate that many of the new farms are not well maintained, and some even appear to have been abandoned. Equally important, very few villages, or even houses, are visible in the area. The farms that do seem to be thriving appear to be capital-intensive operations that employ few people. Such an assessment is reinforced by the verdict leveled by Dr. Mohamed Nasr Allam, a professor of irrigation engineering at Cairo University: “We are giving the income from our water and land to foreigners who are developing large, mechanized farms that require limited labor force.”

The idea that millions of people would make this inhospitable area their new home by 2020 may be a pipedream. And if settlers do come, they will be vulnerable to both drought in the Ethiopian highlands and future water projects in Sudan and Ethiopia. It is all to easy to imagine that the entire Toshka/New Valley project will end up as a boondoggle, a memorial to the Mubarak regime that the Egyptian economy can ill-afford.