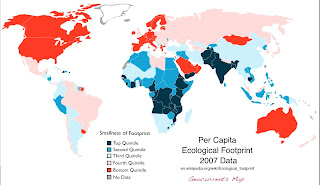 The Happy Earth Index, discussed yesterday, relies on the ecological footprint to measure environmental sustainability. The footprint, widely regarded as “the world’s premier measure of humanity’s demand on nature,” is defined as “the amount of biologically productive land and sea area needed to regenerate the resources a human population consumes and to absorb and render harmless the corresponding waste.” Calculations of country-level ecological footprints are substantially based on consumption figures, especially those of energy, food, and water. As all wealthy countries consume heavily, all have relatively large footprints. Some, however, are much larger than others. Rich countries that use energy efficiently, such as Japan, come in with lower figures than those that don’t, such as Canada. Poor countries consume little and thus generally have small footprints. Less developed countries with large prints typically have energy-intensive mining economies, Mongolia being the prime example.

The ecological footprint is a reasonable metric if used in the narrow sense of assessing the extent of land and sea needed to underwrite consumption. When it comes to the disposal of waste, however, the calculations become impossibly complex. How can does one, for example, determine the area required to “render harmless” the carbon dioxide pouring out of a coal-burning power plant, and then compare it precisely with the area needed to nullify radioactive waste generated by a nuclear power plant? And when used as an overarching measurement of environmental sustainability, the “footprint index” fails completely as it conceals many of the most severe forms of ecological degradation.

The environmental failings of the model are several-fold. Ironically, its signal flaw stems from its anthropocentric nature. The entire scheme is concerned only with the resources used by people. Other creatures, unless they are consumed, are of no account. A country could suffer an eco-catastrophe, seeing the extermination of all its large mammals and birds, and it would not register on the index. Wholesale deforestation, swamp drainage, and other forms of habitat destruction are hardly noted. The model is also static. The fact that the populations of Yemen and Pakistan will probably double within a half century, while that of Japan will likely decline, does not figure, nor does the break-neck industrialization of India and China.

The failure of the ecological footprint as a proxy for sustainability, or for any other form of ecological well-being, is glaringly obvious on the map. Could anyone actually contend that Afghanistan, Pakistan, Yemen, and the DR Congo are more sustainable than Norway, Sweden, or Finland? Are we really expected to believe that the poorest societies of tropical Africa and South Asia offer models of living within environmental limits? Yemen, its water and oil near exhaustion and its society near detonation, admirably avoids consumption of just about everything but the narcotic qat and hence makes the planet happy, whereas Denmark, with the third largest per capita footprint in the world, is a resource-sucking burden on the Earth? Bizarre though it might seem, this is what a literal reading of the ecological footprint map tells us.

Environmentalists are often accused of seeking to impoverish society, an accusation that the movement denies, and with good reason. But more than a few eco-radicals do seek to establish a low-consumption economy that most people would regard as poor indeed, and many others find merit in an ecological footprint model that unfavorably contrasts Scandinavia, let alone the United States, with socio-environmental disaster-cases such as Yemen. Such thinking offers plentiful ammunition to anti-environmentalists seeking to portray the entire green movement as opposed to development.

The ecological footprint model is rarely used to make explicit comparisons among specific countries. It is more commonly employed as a means of environmental persuasion. People are asked to contemplate the footprints of the wealthy countries, and of their own existence, in the hope that this will shame them into consuming less. Whether the model is useful in this regard is a separate issue.