The Human Development Index in Africa and Across the World 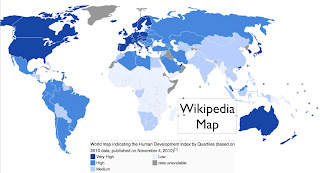 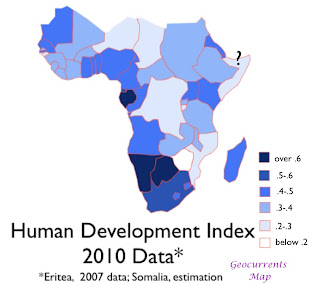 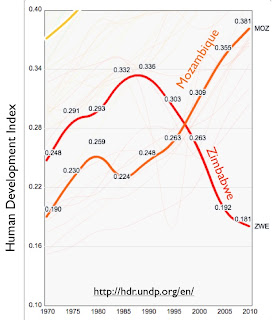 The increasingly standard way to measure development is through the Human Development Index (HDI), a composite statistical tool devised by the United Nations Development Program. The HDI measures wealth and wellbeing across three axes: life expectancy, education, and income. The individual components are themselves involved; “education levels,” for example, are pegged according to a separate “education index” that entails literacy rates as well as enrollment levels for primary, secondary, and tertiary schools. New statistical methodology was introduced for the 2010 report, which was released on November 4. More complex versions of the index, taking into account such factors as levels of inequality, are also available. For those interested, the Human Development Report websiteoffers a treasure-trove of statistical resources.On the four-level HDI map posted above at the top, the old “First World” of wealthy, market-oriented countries shows up clearly in dark blue, with the notable additions of South Korea, Hong Kong, Singapore, the UAE, and several countries in Central Europe. But the Third World, or Global South, is not so easily discerned. The map’s second quartile category, questionably labeled as the zone of “high development,” encompasses most of Latin America, the Middle East, and Russia along with eastern Europe. So-called Monsoon Asia—South, East, and Southeast Asia— largely occupies the third quartile, and sub-Saharan Africa basically makes up the fourth.

The second map posted above, which divides the same data into five-levels, gives a different picture. “Monsoon Asia,” for example, splits into a mid-level east and an upper-lower southwest. The rankings of a number of countries here are unexpected. The United Kingdom, for example, is mapped as less developed than Greece. Partly this is a matter of the top category cutting off at .85 and the UK coming in at .849. But Britain’s poor showing may still indicate problems with the methodology employed, as by most measures it remains well ahead of Greece. Singapore’s failure to make the top category is also perplexing, as is that of Qatar and the other small Persian Gulf states. Such ranking oddities seem to stem largely from the education index, which puts a high valuation on college enrollment figures.

Africa stands out clearly on five-fold map, as it dominates the lowest category. Of the 21 countries with HDI figures below 4.0, all but one (Afghanistan) are in Africa. But the map shows that it is not the continent of Africa that occupies the bottom slot, but rather tropical Africa. Both North Africa and far southern Africa (South Africa, Botswana, and Namibia) evince much higher levels of human development. The HDI figures for mainland tropical Africa range from low to extremely low, with Equatorial Guinea and Gabon forming the only exceptions, based on their small populations and large oil reserves.

The five-level map still fails to capture human development variability in sub-Saharan Africa. Its bottom threshold of “below .40” is still far above the .181 figure marked for Zimbabwe. The gap between Tanzania (.398) and second-lowest ranking DR Congo (.239) is still substantial, yet remains invisible on the map. The final map therefore provides a more detailed depiction of HDI rankings in the region.

The HDI scores give rough indications of socio-economic conditions, but they tell us nothing about progress, or its absence. A country with relatively high figures could be experiencing long-term decline, just as one with low figures could be making rapid gains. Several African countries fall into the latter category. Mozambique may be placed at the fifth lowest position in the world, but as the graph above shows, it has made major strides since the end of its civil war in 1992. Mozambique is thus a developing country, but the same cannot be said for neighboring Zimbabwe. Before 1990, Zimbabwe was progressing so rapidly that it seemed poised to join the mid-level category occupied by South Africa, Namibia, and Botswana. But the agricultural expropriation schemes initiated by Robert Mugabe put an end to all of that, sending Zimbabwe into a developmental tailspin. But to be fair, Zimbabwe might not occupy the lowest position in the world; HDI figures have not been gathered for Somalia in years. I have mapped it in the second lowest category in deference to Somaliland, but I imagine that the rest of Somalia would rank at the bottom of the chart.