The Human Development Index and the Pace of African Progress 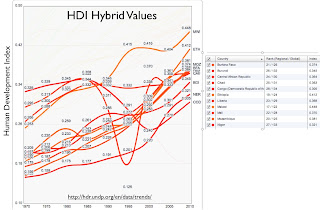 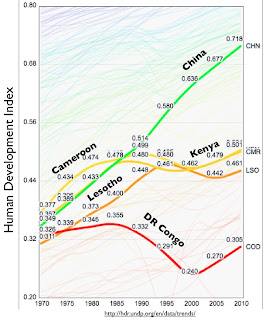 On November 17, Gregg Easterbrook hailed the 2010 U.N. Human Development Report as “one of the world’s most significant documents,” highlighting its finding that the gap between the wealthy and poor countries is shrinking. “The South catches up,” responded blogger Andrew Sullivan approvingly. In overall terms, the authors announced, the poor world is indeed developing.

But as we have seen, a few undeveloped countries are not progressing at all, and quite a few that are moving forward are doing so at a snail’s pace. As the graph of the Human Development Index progress of eleven of Africa’s poorest countries shows, the trend is generally upward, but unevenly and slowly. Development in tropical Africa does not look impressive when charted against a rapidly developing country, such as China. The second graph above pits China against African countries that had similar HDI figures in 1970. Cameroon, Kenya and Lesotho basically kept pace with China until the 1980s; afterward, divergence was pronounced.

In addition to aggregate measurements such as the HDI, it is important to examine specific indicators. Under-age-five mortality figures (per 1,000 live births) are particularly instructive. On this measure, only a few sub-Saharan African countries best the global average of 65. In other regions, many so-called Third World countries achieve much better results; in Costa Rica the figure is eleven, in Chile nine, and in Cuba six. But again, it is the disparities across Africa that are most striking. Botswana’s figure of 31 is well below the global average, while oil-rich Angola’s childhood death toll of 220 per thousand is staggeringly high, exceeded only by that of Afghanistan (at 257).

As the paired maps posted above show, progress on childhood survival has also been variable across sub-Saharan Africa. Some of the region’s poorest countries have made some of the most impressive gains. While Niger’s 16 percent loss rate (160 per 1,000) is still appallingly high, more than 30 percent on its young children perished two decades ago. Yet in neighboring Chad, which has the third highest rate in the world, regression has occurred. Chad is not alone in this category. Childhood mortality has increased in Republic of Congo, another country endowed with oil, and in Kenya, once Africa’s pacesetter. Generalizations about human development in sub-Saharan Africa do not come easily.