As previously promised, we now turn to depictions of the Philippines made with the province-level maps of the country that are available for download on this website. Today’s post looks at poverty and the Human Development Index, whereas the forthcoming one will examine population patterns and trends. 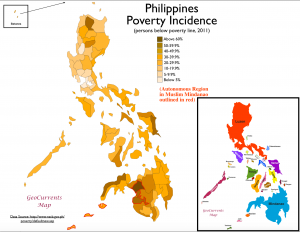 The first map, that of the incidence of poverty as defined by the Philippine government, shows several clear spatial patterns. The first is the relative lack of poverty in the greater Manila Bay region of central Luzon. The standing of this area may seem surprising, as the densely populated Manila metro urban area is characterized by grim and extensive slums and squatter communities. But as is often the case, rural poverty in the Philippines tends to be more widespread and extreme than that of the large cities, which is one of the main reasons why people continue to move to crowded urban areas. The incidence of poverty is also markedly low in Benguet province in the southern portion of the highlands of northern Luzon. Benguet is home to Baguio City, a resort area and major educational center. Many of the indigenous people of the province, moreover, are noted for their devotion to commercial vegetable farming, a profitable but environmentally damaging enterprise that I analyzed in some detail in my first book, Wagering the Land.

As the map indicates, poverty is pronounced in several widely scattered parts of the Philippines. Overall, the poorest part of the Philippines is the Muslim-majority area in the southwest, which I have therefore outlined in red. But several non-Muslim provinces on Mindanao also have high poverty rates, and in general terms the island is much poorer than Luzon. Some of the historically tribal areas of the highlands of northern Luzon are also quite poor, quite in contrast to neighboring Benguet. In the central Philippines, Samar (particularly eastern Samar), eastern Negros, and Masbate have high rates of poverty, a deeply entrenched pattern of Philippine economic geography. The Philippine government recently announced that poverty in Samar and elsewhere in the eastern Visayas has intensified in recent years, a trend linked to the tropical cyclones that have devastated this vulnerable area. 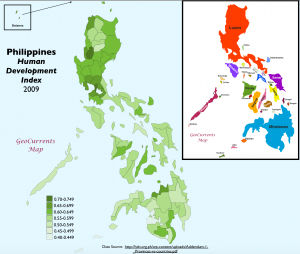 The map of the Human Development Index, which takes into account issues of health, longevity, and education as well those of narrower economic scope, is similar but by no means identical to the map of poverty. Here the greater Manila region again scores high. The top-ranking provinces are Manila itself and Benguet, whose identical scores of .718 are in the same general league of those of Malaysia, Russia, and Mexico. Northern Luzon in general sores high on the HDI map, with the exception of the northern provinces of the highland belt. Relatively high scores are also found in Cebu, the Iloilo area of Panay, and Misamis Oriental in northern Mindanao. According to this map, the southern “inland seas” region of the central Philippines is doing better in terms of human development than the northern “inland seas” region. The Muslim region again comes at the 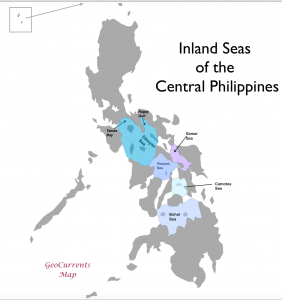 bottom of the chart, with the figures for Sulu, Tawi-Tawi, and Maguindanao falling in the same general category as those of Afghanistan, Malawi, and Yemen.