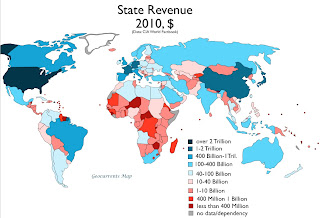 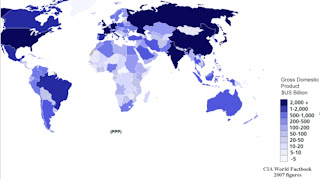 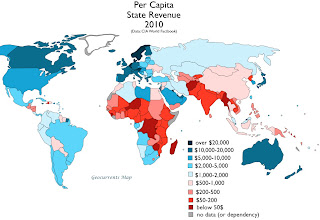 Everyone knows that vast disparities of wealth and productive capacity separate the world’s richest countries from its poorest ones. It is thus no surprise to learn that the per capita GDP of France ($34,092) is 100 times greater than that of the Democratic Republic of Congo ($340). Less widely appreciated is the fact that the size of national governments, as measured by state revenue, varies even more. In 2010, governmental revenues in France totaled $1.24 trillion, whereas those of DR Congo came in at a meager $700 million. The French government, in other words, took in fully 1700 times more money than did that of DR Congo, a country of roughly the same population. Clearly governmental economic disparities are much greater than general economic disparities.

The revenue gap between France and the DR Congo is particularly large, as France has a massive state structure, while that of the DR Congo is miniscule. The French government extracts a high proportion of the total economic value produced in the country, taking in more than half of the country’s total GDP of 2.14 trillion. DR Congo’s government, on the other hand, is unusually feeble, failing to control much of the country nominally under its power and barely governing the rest. DR Congo may be a poor country, but its government is poorer still, hardly tapping the economic activity that does occur within its borders. Its annual revenue amounts to only about 10 dollars per person per year.

Overall, the wealth or poverty of a country’s economy correlates relatively well with the wealth or poverty of its government. Governments of a few extremely poor countries, however, are able to extract a significantly higher percentage of their meager outputs than DR Congo manages to do. Eritrea, which the IMF lists as the world’s fifth most impoverished country (with a per capita GDP of $676), reports governmental revenues of $89 per person per year, roughly nine times the level of DR Congo. Whether such enhanced governmental resources benefit the citizenry is a different question, of course. Eritrea uses most of its tax income for military purposes, devoting over 20 per cent of its total GDP to the armed forces—possibly the highest figure in the world.*

Using data from the CIA World Factbook, I have mapped total governmental revenues as well as revenues per capita. Subsequent Geocurrents postings will look at revenue per unit of GDP, as well as state expenditures. For purposes of comparison, I have also posted world maps showing total and per capita GDP (in Purchasing Power Parity), based on 2007 data.

In general, the geographies of state revenue and GDP track each other relatively well. In regard to the first set of maps (showing total figures), the major discrepancies appear in India and China, which rank lower in the revenue map than in the GDP map. In regard to total GDP, China and the United States are in the same general range, with the U.S. economy producing $14.6 trillion worth of goods and services in 2010, and China $10 trillion (in PPP). In terms of governmental revenue, however, the U.S. government pulls in almost twice as much as China does ($2.1 trillion vs. $1.15 trillion). Much greater discrepancies are encountered between the major countries of Europe and China, and even more so with India. India’s total GDP is estimated at around $4 trillion, significantly more than Germany’s 2.9 trillion. Yet Germany’s governmental revenue of $1.4 trillion dwarfs India’s $171 billion. Also of note is the greater range of variability in governmental revenue figures, especially in sub-Saharan Africa.

The discrepancies noted above would admittedly not be as great if the economies in question were measured in nominal rather than Purchasing Power Parity terms (ignoring, in other words, the higher costs of basic goods and services in wealthier countries). Nominally, Germany’s economy is more than twice the size of India’s ($3.3 trillion vs. $1.4 trillion). But Germany’s state revenue is still seventeen times greater than that of India.

*Other sources peg Eritrea’s military spending at a lower level, while few dare to give any estimate for North Korea.