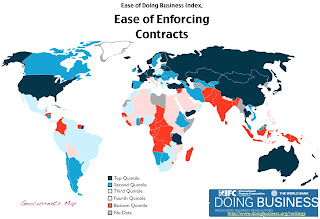 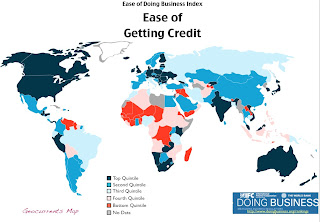 The World Bank’s Ease of Doing Business Index rests on a complex amalgamation of data. Each of its component measurements is based on a sub-index, each of which produces a different map. Consider Canada’s relatively low position on the ease of enforcing contracts map, posted above. Canada ranks seventh overall in the composite index, but falls to 58th place in terms of contracts. Canada drops here because it requires a few more legal procedures than comparable countries, and because its courts operate at a slightly slower pace. In terms of the costs of legal procedures, the third component of the contracts sub-index, Canada compares favorably with such high-ranking countries as the UK and New Zealand.

Of the world regions, South Asia clearly ranks last in regard to contracts. India’s exceptionally poor showing here is one of the main reasons why it scores so low in the overall business index. Such findings are not surprising, as India’s legal system in notoriously lethargic, with many cases languishing for years before a decision is rendered. As the report further indicates, legal fees in India are high, and legal procedures are intricate.

Several features of the contracts map deviate markedly from the overall business index. The high positions of the former and nominally communist countries is striking, perhaps reflecting their relatively strong state structures. Tanzania’s placement is less explicable, and that of Yemen seems bizarre. In the chaotic political environment that characterizes Yemen, formal contact enforcement through the national court system is not easily accomplished.

Yemen ranks high on the contracts sub-index, it turns out, on the basis of its official regulations, not its actual conditions. The contract enforcement measurement is determined by “data relating to the time, cost and procedural complexity of resolving a standard commercial law suit … collected through study of the codes of civil procedure and other court regulations…” Yemen’s numbers are elevated because it does not require many procedures to obtain a judgment, and because attorney, court, and enforcement costs are supposed low, amounting to only 16.5 percent of claim values. Whether such conditions obtain in practice is another matter, one that is not addressed in the report. Supposedly, “surveys completed by local litigation lawyers” factor into the analysis, but no information on such surveys is given, nor or we told how such data is weighed. We are also not informed about whether such conditions obtain outside of the capital city. As much of Yemen’s hinterlands remain largely under tribal authority, with large areas harboring insurgent groups, the “number of legal procedures required by the government for a contract to be enforced” has little if any meaning. As a result, Yemen’s ranking on the map has little if any meaning.

The second map, generated from the “getting credit” sub-index, is quite distinctive from the first. India jumps from the last to the first quintile, and Yemen does the opposite. Again, the map perplexes. Is it really easier for a businessperson to obtain credit in Kenya, Zambia, and Rwanda than in Norway, the Netherlands, or Belgium? Do Ukraine and Kyrgyzstan actually outrank France and Spain? According to the data, the United States shares sixth place with Zambia, Kenya, and Guatemala, whereas Luxembourg – ranked in first place in terms of enforcing contracts – comes in 116th. If accurate, these relative positions are extraordinary and deserve extended consideration. To assess their accuracy, let us consider Zambia in more detail.

Zambia’s surprisingly high overall ranking in the business index has attracted considerable attention. The articles that I consulted mention a number of factors, but credit does not figure prominently. One report, for example, claims that “Over the last year, Zambia made it easier to start a business and for companies to trade across borders. It also improved enforcement of contracts.” Another trumpets the fact that “Zambia eased business start-up by eliminating the minimum capital requirement and it made trade easier by implementing a one-stop border post with Zimbabwe, launching web-based submission of customs declarations, and introducing scanning machines at border posts.” If credit is really as readily available in Zambia as the World Bank indicates, it is not apparent in recent media reports.

The World Bank’s credit sub-index is based on four measurement: the strength of legal rights index, the depth of credit information index, public credit registry coverage, and private credit bureau coverage. Zambia’s elevated position stems from its extremely high ranking in the first two categories. Officially, Zambia has a credit-friendly legal regime and established credit registries. But again, no information is provided on whether such rights carry through in practice, or whether the registries are accurate and effective. More significantly, no information is supplied on actual credit availability. Zambia’s numbers may come out much better than Slovenia’s, but does that mean that a firm can obtain credit much more easily in Lusaka than in Ljubljana? And are we really expected to believe that Zambia greatly outranks Luxembourg in terms of “getting credit”? Luxembourg fails on this score because it ranks “0” (yes, zero) in both the credit information sub-sub-index and in credit registry coverage. But does that mean that firms in Luxembourg, a country with a per capita GDP $84,000, struggle to obtain credit, unlike their counterparts in Zambia?

In the end, both the credit and contracts sub-indices measure mirages as much as they do actual conditions, confusing rules with realities. Are similar problems encountered with the other component measurements of the Ease of Doing Business Index? We shall see in the next post.