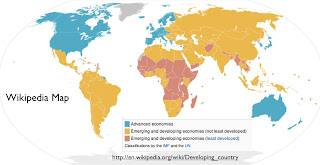 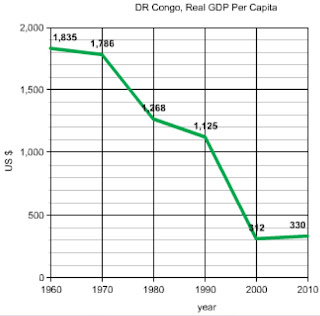 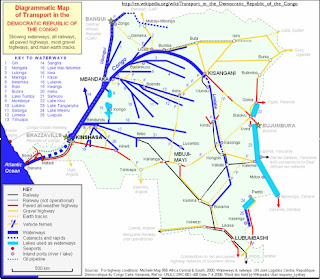 The most common alternative to dividing the earth into a wealthy North and an impoverished South is to separate the developed world from the developing world. This representation avoids undue locational specificity, allowing equatorial and southern-hemisphere countries to be slotted into the economically advanced category without geographical infidelity. Finer levels of categorization are also easily added to the scheme; the World Bank, for example, distinguishes “least developed” countries within the “developing” category. That does not ensure, however, that that all countries are properly classified; in the map above, Portugal is portrayed as “developed” whereas the United Arab Emirates is depicted as “emerging and developing.” Yet the UAE bests Portugal on the Human Development Index, and far exceeds it in regard to per capita GDP. The UAE is regarded as “developing” in part because of its heavy reliance on oil, but that applies only to Abu Dhabi; Dubai has little oil, and is highly developed by almost any measure. Portugal also likely outranks the UAE on the map because it is in Western Europe, a “developed region.”

The terminology used in the global developmental schema reveals a deeper flaw. The foundational idea is that every country has either already achieved high living standards as part of the “developed world,” or is approaching that condition as part of the “developing world.” The concept has no room for countries that drop out of the advanced category, such as Moldova, or for poor countries that stagnate or regress. It assumes that the future is both predictable and rosy, headed globally in one direction. But the evidence for such a process of convergence towards universal development is thin. Some countries are indeed advancing at a scorching pace, but others are not developing at all.

The clearest example of a non-developing “developing country” is Democratic Republic of Congo, which is not much of a democracy and not much of a republic. To be sure, it has experienced some economic growth in recent years; according to the CIA World Factbook, its economy expanded by two percent in 2009, four percent in 2008, and a whopping 11.9 percent in 2007. But as the country’s population is growing by three percent a year, it is essentially treading water; the Factbook pegs its per capita GDP (in purchasing power parity) at $300 in 2007, 2008, and 2009. The DR Congo is also stagnating in regard to most measures of social development. Its rate of child mortality per 1,000 live births has remained constant at around 200 for the past 20 years. Most other poor countries, it is important to note, experienced significant gains in childhood survival during the same period; Ethiopia’s under-age-five mortality rate, for example, fell from 210 to 109.

If DR Congo has languished over the past few years, the same cannot be said for the past half century. But far from developing after independence, it has “de-developed” – and in a rather spectacular manner, as the graph* above shows. As the Wikipedia puts it, the resource-rich DR Congo was the “second most industrialized country in Africa after South Africa [in 1960]. It boasted a thriving mining sector and its agriculture sector was relatively productive.” By 1990s, all of that had vanished. Particularly stunning has been the decay of the vast country’s basic infrastructure. To appreciate the condition of its transportation system, try figuring out how to travel between Goma and Mbuji-Mayi on the transportation map posted above.

The Democratic Republic of Congo looks like a substantial country on a world map. In actuality, it is a war-ravished shell of a state. Its total annual governmental revenues amount to a mere $700 million, extracted from a population 70 million strong. By way of comparison, Lichtenstein, with all of 35,000 inhabitants, generates over $900 million in annual governmental revenues. It is thus hardly surprising that little Rwanda, itself an impoverished country that had just gone through a spasm of genocidal violence, was able to unseat the government of the DR Congo in the mid 1990s.

Much of the standard public conception of global geography is mere pretense. We pretend that Iraq and Afghanistan are nation-states, tied together by common sentiments of national unity; we pretend that Somalia is a sovereign state and that Somaliland is not; we pretend that highly corrupt countries with ineffective governments collect accurate statistics that we can map and plug into regression analyses; and we pretend that all poor countries are developing. Such charades are perhaps fitting for diplomats, schooled to avoid offense at all costs. But when it comes to geographical education, we have a duty to portray the world honestly. Although we may all hope that the DR Congo will soon begin to experience economic growth and social progress, we do it no favors by imagining that it has been doing so all along.

* The economic date for DR Congo from 1960 to 2000 is derived from lan Heston, Robert Summers, and Bettina Aten, Penn World Table Version 6.3, Center for International Comparisons of Production, Income and Prices at the University of Pennsylvania, August 2009. The information for 2010 is from the IMF.