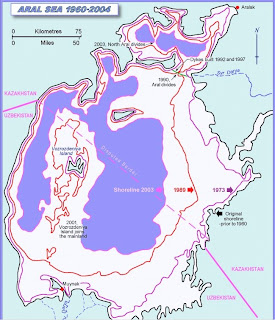 After touring the remains of the Aral Sea by helicopter in April 2010, U.N. secretary general Ban-Ki Moon expressed shock at the scale of devastation. “It is clearly one of the worst environmental disasters of the world,” he reported. “It really left with me a profound impression, one of sadness that such a mighty sea has disappeared.”

The Aral Sea was until recently the world’s fourth largest lake; in 1960 it covered 26,000 square miles (68,000 km. sq.) – an area larger than Sri Lanka. But as the waters of Tien Shan and Pamir mountains flowing down the Amu Darya and Syr Darya rivers were increasingly diverted for irrigation, the lake began to shrink. Soviet planners maximized the production of cotton and other warm-season crops, knowing that it would doom the lake. As the Aral’s waters diminished, they grew increasingly salty and foul. By the 1970s, former shoreline villages were 40 miles inland. Fish species disappeared as the lake began to die. New islands emerged, and Vozrozhdeniye Island, where the Soviets had conducted biological warfare tested, joined the mainland. When the Soviet Union collapsed, destruction accelerated. By the 1990s, the Aral Sea had been divided into two separate lakes, and by 2003, into three. In 2009, the southeastern Aral basin dried up completely. 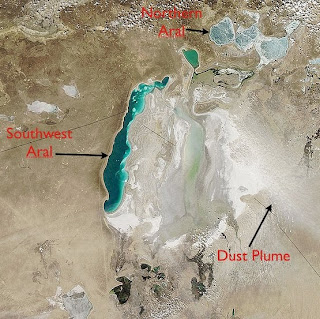 The end of the Aral Sea brought economic and cultural devastation. Fisheries that once employed 40,000 people shut down and local agriculture suffered. As the lake retreated, large salt flats emerged. Windstorms pick up the salt, along with silt and excess agricultural chemicals, and deposit it in local farmlands. The resulting dust storms are thought to transport up to 100,000,000 tonsof particles each year. Crop yields declined and public health suffered, particularly in the densely populated and formerly rich delta of the Amu Darya River.

The tragedy of the Aral Sea is relatively well known, unlike the more recent rebirth of the Northern Aral. In 2001 the oil-rich government of Kazakhstan set about reviving what had been the much smaller of the two successor lakes. Through more efficient irrigation and the construction of modern waterworks, the flow of the lower Syr Darya River was significantly augmented. A massive dike was thrown across the lakebed to prevent the additional water from flowing wastefully across the salt flats of the former Southern Aral Sea. By early 2010, the northern lake had expanded roughly 50 percent, its salinity dropping enough to allow the return of fish. The World Bank and the government of Kazakhstan are currently considering an extension of the project, hoping to bring the lake back to the former port city of Aralsk.

The success of the North Aral restoration project should not take our eyes away from the larger disaster. The renewed Aral is a fraction of the original, and the surviving portion of the southern lake is toxically saline. Nor should we only focus on the Aral, as Central Asia has other environmentally stressed if not devastated lakes. Lop Nor was once larger that Puerto Rico; its desiccated bed later became China’s main nuclear testing ground. Massive Lake Balkhash stretches 376 miles, the distance between San Francisco and Los Angeles. Balkhash, which formed the northwestern boundary of Qing (Manchu) China at its height, is a most unusual lake — salty in the east, but essentially fresh in the west. Compared to the Aral, Balqash may be pristine, but it too is shrinking.