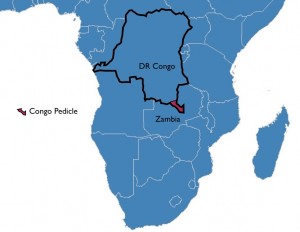 Namibia’s Caprivi Strip is not the only African panhandle to result from European imperial attempts to reach water-bodies. Cameroon, for example, has a northern protuberance that connects to the much-diminished Lake Chad. The Democratic Republic of Congo’s southern panhandle—officially the “Congo Pedicle”—falls in the same category. The agents of Belgium’s King Leopold II were determined to gain access to Lake Bangweulu and adjacent wetlands in what is now Zambia, an area of abundant fish and game. Competition with the British South Africa Company led to international arbitration, which failed to satisfy Belgian desires. The “little foot,” or pedicle, that King Leopold II obtained in the process, however, contained valuable resources of its own. It also proved an obstacle to Zambian development in the post-colonial era.

Before annexation in the early 1890s, the Congo Pedicle and environs were largely under the control of Msiri, an African merchant and empire-builder based in Bunkeya in today’s DR Congo. Msiri was reportedly the first individual to establish a set of direct trade-links from Africa’s Atlantic shores to its Indian Ocean coast. His realm was also rich in copper and ivory, attracting European adventurers. Aware of the waiting dangers, Msiri invited British missionaries, whom he seems to have valued as both interpreters and potential hostages. One of the proselytizers urged him to have potential treaties translated to avoid inadvertently signing away his sovereignty. Msiri complied, and as a result, an 1890 British South Africa Company expedition to his capital gained nothing. Soon afterward, however, a less diplomatically inclined Belgian military convoy arrived. Misiri was killed in the resulting fracas and his realm annexed to the grotesquely misnamed Congo Free State, essentially the personal territory of the brutal king of Belgium. 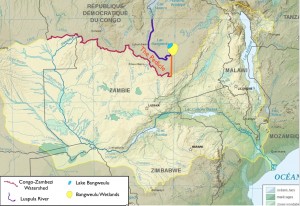 Despite this coup, Leopold’s designs were still limited by the British drive to the north. A general agreement between the contending powers set their territorial division along two natural features: Britain would prevail to the south of the Zambezi-Congo river divide, as well as to the east of the Luapula River, while their Belgian rival would have a free hand in the lands to the north and west. Yet as can be seen on the map to the left, a gap exists between the Luapula River and the Congo-Zambezi watershed: the area comprising the Congo Pedicle. Operating with incomplete geographical knowledge, Leopold’s agents hoped to take advantage of this gap by pushing their claims all the way to the Bangweulu Basin. Britain resisted, and the King of Italy was asked to arbitrate. His straight north/south boundary line gave Leopold a long salient but awarded the lake and its basin to Britain. In 1895, a British South African Company expedition led by the accomplished American scout Frederick Russell Burnham found the fantastically rich ore-bodies of the Copperbelt, straddling what is now the Zambia/DR Congo border. As the mining map shows, the Pedicle gave Belgium, and eventually the DR Congo, substantial mineral resources, although the most productive ore belt lies just outside of it. 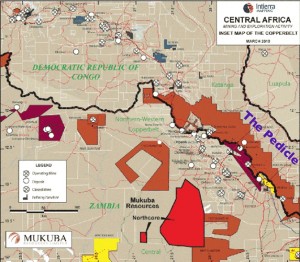 The Congo Pedicle has been a major hindrance to Zambia. Its intrusive presence cleaves the country into two lobes of roughly equal size. Transportation is the major problem. Traveling from northeastern to central Zambia is not too difficult if one crosses the Pedicle, but going around it is terribly arduous, as the Bangweulu wetlands stand in the way. After World War II, Belgium allowed Britain to build an unpaved through-way across the salient. The resulting Pedicle Road proved a major boon for British Northern Rhodesia, and later for independent Zambia. 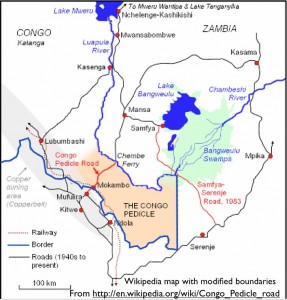 When the government of Zaire (DR Congo’s name from 1971 to 1997) began its slow-motion collapse in the 1970s, problems in the Pedicle mounted. As Congolese border guards were no longer paid, they look to extorting money from, and looting, Zambian traffic on the Pedicle Road. As early as 1975, conditions along the corridor had become one of Lusaka’s most pressing concerns. Yet throughout the time of anarchy in its giant northern neighbor, Zambia continued to respect Congolese sovereignty. Even when various militias, armed gangs, and proxy armies* were carving up the carcass of Zaire, Zambia remained on the sidelines, the inviolability of colonial borders being a cornerstone of its geopolitics. Zambia’s response to Congolese chaos was the costly 300-kilometer Samfya-Serenje Road, requiring nearly 20 kilometers of elevated causeways to allow passage through the Bangweulu wetlands. Completed in 1983, this road is a circuitous replacement for the Pedicle route, as can be seen on the map to the left.

Recent improvements in the governance of DR Congo have allowed easier transit across the salient. But by now, the long-neglected Pedicle Road has deteriorated. Constructed of laterite (an iron- and aluminum-rich form of soil that makes a hard crust when exposed to the air), it formed only a passable roadway in the best of times. Efforts are now underway to refurbish the highway. In mid-2011, Zambian newspapers proudly announced that the Pedicle Road would be paved, resulting in a “breakthrough which will facilitate enhanced communication and transportation of goods and services.”