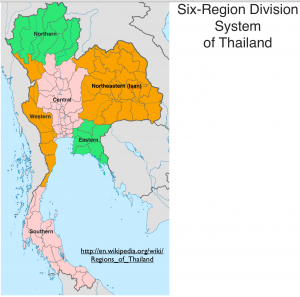 News that a Thai court had just ousted Prime Minister Yingluck Shinawatra came to my attention yesterday just as was beginning to prepare a lecture on the politics, culture, and economy of Thailand. I immediately began to assemble a series of maps showing the geographical contours of Shinawatra’s powerbase. According to the conventional story, the populist (former) prime minister, like her brother Thaksin before her, gathers most of her support from the relatively poor and agrarian north and northeastern regions, whereas her establishment-oriented opponents find most of their support in the relatively wealthy Thai core area around Bangkok, as well as in the south and west. But when I examined the most recent economic and political maps, it quickly became apparent that story is a bit more complicated. 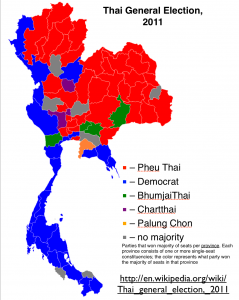 As it turns out, most of the provinces in the greater Bangkok region had actually voted for Shinawarta’s Pheu Thai party or other populist parties in the most recent election (2011), although Bangkok itself did support the main opposition party, the conservative (or classically liberal) Democrat Party. The Democrat Party also performed very well in the “middle-income” southern and western regions of Thailand. 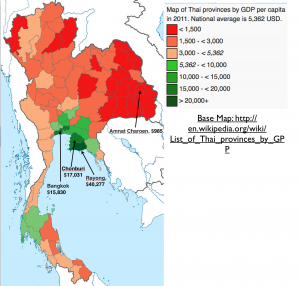 The big surprise, however, came from the most recent map of Thailand’s per capita GDP by province, posted in the Wikipedia. As it turns out, greater Bangkok is no longer wealthiest part of the country, at least according to this metric, having been surpassed by the Eastern Region, also known as the Eastern Seaboard. The discrepancy is pronounced, with Rayong Province posting a “First World” figure of $40,277, greatly surpassing Bangkok’s $15,830. Not surprisingly, both figures dwarf those of Thailand’s Isan (or Northeastern) region, with Amnat Charoen Province registering a paltry figure of $985. As the electoral map shows, most of the prosperous Eastern Region supported the conservative Democrat Party in the most recent election, although well-off Chonburi province gave its support toPhalang Chon, a small populist party led by a former supporter of the Shinawatras. 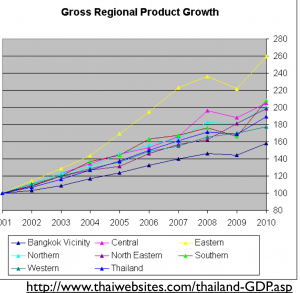 The economic rise of Thailand’s Eastern Seaboard is relatively recent, as can be seen in the graph posted here, which terminates in 2010. Since 2011, moreover, the region has continued to surge ahead in industrial development. The main reason’s for the east’s ascendency is spelled out in the Wikipedia article on the region, as are some of the trade-off involved:

The [Eastern Seaboard] region is home to many huge industrial estates. …

However, development hasn’t come without consequences. Serious problems resulting from pollution have plagued the Map Ta Phut Industrial Estate in Rayong, an industrial zone for petrochemical and heavy industries that has suffered from heavy metal and organophosphates poisoning. Factory workers in the region are among the highest paid in Thailand, often more than doctors in the region, but occasionally suffer physiological ailments.

Besides heavy industry, Thailand’s eastern seaboard is also noted as a tourist destination and settlement zone for well-heeled expatriates. This combination may seem odd, as petrochemical plants and tourism tend to be mutually exclusive, but the region is apparently large enough for both. The same Wikipedia article quoted above also outlines this side of the regional economy:

Other than its manufacturing and shipping industries, [the eastern Seaboard] also has a diverse service sector consisting of the tourism, construction, and retail industries. Pattaya, the major tourist city, is also located here, and is only second to Bangkok in Thailand for the number of high rises. The region is also popular as a retirement area for foreigners.

Left out of this brief discussion is Pattaya’s main draw: commercial sex. As Macao and Las Vegas are to gambling, Pattaya is to prostitution. For visual evidence, all one has to do is conduct an image search on the city. But other tourist draws exist as well, and more are coming. According to a recent article in the Pattaya Mail:

One of Pattaya’s most long awaited tourism attractions, the Cartoon Network Amazone water-park, is on schedule for a summer opening in July of this year.  Located in Bang Saray, approximately 14km from Pattaya, the project is the first internationally branded water park in Thailand and is touted to put the country on the global theme park map.

Other recent news headlines from the city include: “Drunk, broke and lovelorn, Russian arrested for stealing ‘white spirits’”; and “Miss Tiffany’s Universe Transgender Beauty Contest Held in Pattaya.” As the latter article notes:

This year marked the 40th anniversary of the Tiffany’s show in Pattaya and this was the 16th Miss Tiffany Universe contest with all of the transsexual or transvestite contestants, aiming to promote human rights for the trans-gender population in Thailand.