“In South Korea …, the North’s human rights abuses are routinely shrugged off with reference to its supposed superior nationalist credentials. … Sympathy for Pyongyang is especially widespread in the peninsula’s chronically disgruntled southwest.” 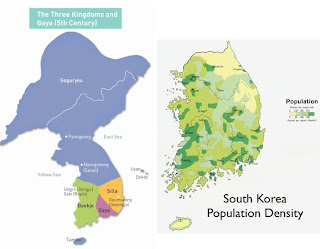 Korean nationalism has evolved into different variants in the North and South. Under Pyongyang, the enforced cult of patriotism has veered in the biological direction of classical fascism, emphasizing the racial purity of the Korean – and especially the North Korean – people (see R.B. Myers, The Cleanest Race: How North Koreans See Themselves and Why It Matters). South Korean nationalism is much more cultural and historical, and thus accommodates streams of foreigners marrying into the Korean population. More than 5,000 Vietnamese women immigrate every year, generating some cultural tensions to be sure, but helping to maintain otherwise depopulating rural areas. 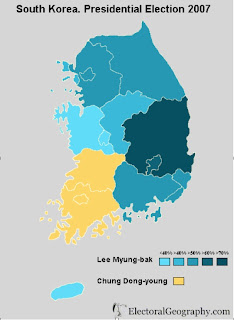 Despite its intensity, South Korean nationalism has by no means erased the country’s regional distinctions. South Korea’s basic divisions are often said to date back to the Three Kingdoms period (57 BCE to 668 CE), when the peninsula was divided between Silla, Baekje, and Goguryeo (Gaya, seen on the map, was not nearly as significant as the other three.). In the 600s, Silla, based in the southeastern part of the peninsula, unified the country. After Silla collapsed in the 900s, Goguryeo, based in what is now North Korea and northern South Korea, reunified the peninsula. Goguryeo was eventually supplanted by the Joseon Dynasty (or Chosun, 1392-1897), governed from Seoul. Baekje in the southwest, unlike the other two ancient kingdoms, never served as the hub of a unified Korea.

In modern South Korea, the southwest has been the focus of regionalist antipathy to the central government. Through the early decades of the postwar period, the region remained relatively poor and agrarian, its people suspecting that they had been intentionally marginalized by a hostile government. In 1980, the southwestern city of Gwangju rose up against the authoritarian South Korean regime, only to be crushed by the military. Official reports at the time linked the rebellion to a communist plot, but today it is officially commemorated as part of the national movement for democratization. A major breakthrough occurred in 1998, when a southwesterner, Kim Dae Jung – the “Nelson Mandela of Asia” – was elected to the presidency.

Since Kim left office in 2003, South Korea’s presidency has been filled by men originating in the southeast. Homeland of the former kingdom of Silla, the area known today as the Gyeongsang region has produced six of South Korea’s eight most recent presidents, including the incumbent, Lee Myung-bak. Critics claim that the conservative-leaning southeast receives undue favor from the central government, with infrastructural investments nurturing its industrial development. The city of Daegu is particularly noted for its political influence, being the seat of the powerful center-right Grand National Party.

Unlike the southeast and southwest, northern South Korea is not identifiable with an ancient kingdom, having been merely the southern portion of Goguryeo. But it was the site of the capital city, and it has remained the seat of political power. Development has continued to gravitate around Seoul and its greater metropolitan area – an hour’s drive from the North Korean border. Ten million people now live in Seoul itself, while more than 24 million – almost half of South Korea’s population – live in the officially demarcated National Capital Area. Northeastern South Korea, by contrast, is lightly populated (see map), and barely figures in discussions of South Korean regionalism.

South Korea’s basic geographical structure is thus conventionally conceptualized around a three-fold division: the northwest is the administrative, economic, and demographic core; the southeast is the prosperous heartland of the old-guard political establishment; and the southwest is a marginalized area of leftist politics. Electoral maps generally bear out this division. In 2007, Chung Dong-young of the left-liberal United New Democratic Party took the southwest, while Lee Myung-bak of the conservative GNP triumphed elsewhere, particularly in North Gyeongsang, the core area of the one-time kingdom of Silla.

But if the tripartite division of South Korea still obtains politically, it no longer does so economically, as tomorrow’s post will explore.