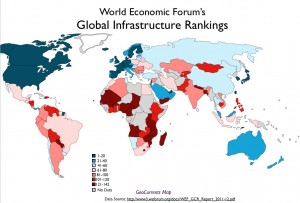 September 17th 2011 article in The Economist stresses the inadequacy of Colombia’s transportation system, arguing that poor roads hold back the country’s economic growth. As evidence of the severity of the problem, the author notes that in terms of overall infrastructure, Colombia comes out “79th of 139 countries’ networks ranked by the World Economic Forum.” In actuality, it seems to rank slightly lower than that; the World Economic Forum’s “Global Competitiveness Report 2011-2012” places Colombia in the 85th position out of 142 countries surveyed (page 18).

Yet as the GeoCurrents map constructed from the World Economic Forum data indicates, Colombia’s standing is similar to those of its neighbors. Overall, Latin America fares poorly in global comparisons of infrastructure; only Chile, Uruguay, and Panama placed within the top 60. Such standings are lower than what might be expected based on the region’s overall economic development. This in turn suggests that investments in Latin American transportation and communications could return substantial economic benefits—precisely what is argued in regard to Colombia in The Economist article referenced above.

Intriguingly, fast-growing Panama stands out in the World Economic Forum’s infrastructural rankings, where it occupies first place for Latin America and 38th for the world as a whole. The report highlights Panama’s relatively high level of “competitiveness” overall, noting that it has “the strongest competitive position in Central America.” It especially touts Panama’s recent improvements in its “port and air transport infrastructure,” while acknowledging that the country is held back by its lagging educational system and questionable governance. 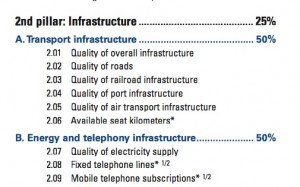 The infrastructure index compiled by the World Economic Forum assesses transportation, energy, and telephone networks, as can be seen in the chart posted here. It is unclear whether the methodology employed is adequate to the task. Although some components of the index use hard data (per capita telephone lines, for example), most are based on subjective assessments established through surveys. Respondents are asked, for example, “How would you assess port facilities in your country? [1 = extremely underdeveloped; 7 = well developed and efficient by international standards].”* Such personal evaluations, however, are unlikely to be determined in the same manner across the globe. Some of the other “competitiveness” indicators tracked by the Forum are even more misleading. Egypt and Saudi Arabia, for example, are ranked alongside Denmark and Iceland as having the least organized crime (p. 404). The notion that Egypt, where human trafficking is a major concern, is less plagued by Mafioso activity than Singapore or Sweden is not credible.

Similar data issues may account for some of the surprising rankings on the infrastructure index. Australia (24th), for example, barely beats Malaysia (26th), a much less developed country. Australia does not place in the top twenty positions in any of the infrastructure sub-indices except that pertaining to airline travel. Its lowest showing (69th) comes in the objective category of mobile cellular telephone subscriptions per 100 population. That Montenegro ranked 3rd, Vietnam 5th, and Suriname 6th on this particular measurement calls its significance in question; high levels of cellular telephone use are often linked to underdeveloped land-lines, and thus make poor indicators of infrastructural development in general. It is also notable that other sources from only a few years earlier give strikingly different figures on global cell-phone usage, which casts doubt on the data themselves.

I am attracted to such indices as those provided in the World Economic Forum’s Global Competitiveness Report largely because they are easily mapped, generating clear visual pictures of particular aspects of global socio-economic development. Yet when I examine such indicators in detail, I am usually disappointed. Numbers that seem solid often melt into air.

*For landlocked countries, the question is as follows: How accessible are port facilities? [1 = extremely inaccessible; 7 = extremely accessible].”