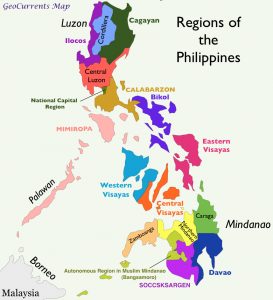 For decades, the Philippines has been noted for its economic failures. Fifty years ago, it was ahead of South Korea on most economic indicators, and its relatively high levels of education and public health seemingly indicated a bright future. Misrule, corruption, and missed opportunities, however, took a heavy toll, as did a persistently high birthrate, leading many observers to dub the Philippines the “sick man of Asia.” As a result of such problems, the Philippines has had to export much of its labor force. Currently, more than 9 million Filipinos work abroad, many of whom (particularly nurses) are highly educated.

Over the past several years, however, the Philippine economy has regained its health, registering rapid expansion just as its neighbors have slumped. In the second quarter of 2013, the Philippine economy grew at an annual rate of 7.5 percent, roughly equal to that of China and far surpassing Indonesia (5.8 percent) Vietnam (5 percent), Malaysia (4.3 percent), and Thailand (2.8 percent). Current economic expansion, moreover, seems relatively well balanced, with strong gains in manufacturing, construction, and services. Business-processing outsourcing, however, has been the strongest sector.

But if the Philippine economy has been doing well of late, the country still faces enormous challenges. Poverty remains deep and widespread, and many Filipinos cannot find work. In the outsourcing boom, fairly high skill levels are generally required. Many experts think that infrastructural investments and gains in basic manufacturing will be necessary before broad-based employment growth can be realized. 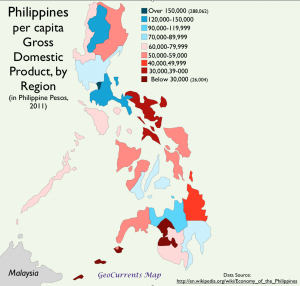 Regardless of the country’s prospects, it is clear that economic development in the Philippines remains very geographically uneven, as is the case in most developing countries. In terms of per capita gross domestic product, the country’s richest region enjoys more than a ten-fold advantage over its poorest region, as is evident in the map posted to the left.* By far the most prosperous part of the country is the National Capital Region, roughly comprising Metro Manila, the Philippines’ primate city. Although Manila is infamous for its vast and dismal slums—recently depicted by a well-known novelist as the very “gates of Hell”—the city actually has much less poverty than most other parts of the country, as can be seen on the map below. (It must be noted that the threshold for poverty in the Philippines is set at a very low level.) It is thus understandable why Metro Manila continues to mushroom, despite its inadequate infrastructure and appalling pollution. 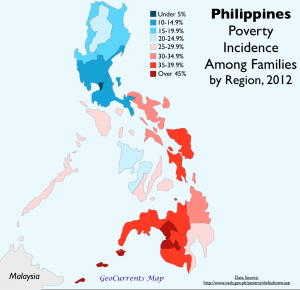 Some intriguing geographical patterns are evident in these maps. The poverty map shows a clear north/south divide, with Luzon vastly out-performing the southern island of Mindanao. In Luzon, the broad central zone around Manila shares to some extent the capital’s relatively high standing, particularly in regard to poverty. The southern Tagalog region (now known by the acronym CALABARZON), noted for its fertile volcanic soils and mid-sized manufacturing cities, clearly stands out on the per capita GDP map.

Two of Luzon’s regions demand more careful consideration. Southeastern Bikol lags well back, despite its relatively productive agricultural basis. Yet in the early 20th century, Bikol was among the most economically vibrant parts of the Philippines, based on its export of Manila hemp, or abacá (derived from the fibers of a plant closely related to the banana, and giving us the term “Manila envelope”). But as historian Norman Owens has shown, the abacá industry failed to generate sustainable economic development, and when it collapsed so did the regional economy. Relatively speaking, Bikol has never recovered. 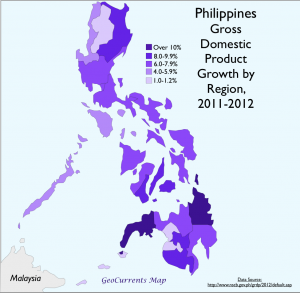 Luzon’s other oddity on GDP map is the mountainous Cordilleran region, which posts the country’s second highest level of per capita production. Not only is the Cordillera a rugged area with limited infrastructure, it is also mostly inhabited by so-called tribal peoples, members of ethnic groups that were not Christianized under Spanish rule. Such conditions would in general lead one to expect subsistence-oriented economies with low per capita GDP and widespread poverty. But the Cordillera also includes Baguio City, the high-elevation resort city favored by the Philippine elite, as well as the mining and temperate-vegetable-growing districts of Benguet Province (discussed in my book, Wagering the Land). Like the Philippines as a whole, the Cordillera is characterized by profound economic disparities.

The island of Mindanao in the far south also contains some interesting discrepancies. Although the entire island has high levels of poverty, its north-central and southeastern regions are fairly productive in economic terms. The Philippine’s fastest growing economies are also found in Mindanao, particularly the far west (Zamboanga) and the northeast (Caraga). The key factor here seem to be export-oriented, plantation-based agriculture, focused on such high-value crops as pineapples (the Philippines is the world’s leading pineapple producer by a healthy margin). Mindanao is now responsible for some 60 percent of Philippine agricultural exports. Plantation-based agriculture, however, is often noted for its failure to alleviate poverty even where it does generate substantial economic gains.

On all three economic maps posted here, one region stands out for its poverty and lack of economic development: the Autonomous Region in Muslim Mindanao (which is in the process of being renamed Bangsamoro). The prolonged insurgency here both reflects and has deepened its entrenched economic distress. Although some observers think that peace may be at hand as a result of a 2012 agreement between the government and the Moro Islamic Liberation Front, others are not so optimistic. As recently as August of this year, some 2,000 people were forced to flee their homes in Mindanao due to fighting between the Philippine military and the breakaway rebel group that calls itself the Bangsamoro Islamic Freedom Fighters.

*In the United States, by contrast, the per capita GDP difference between the least productive (Mississippi) and most productive (Delaware) state is a little more than two-fold: $33,000 to $70,000.