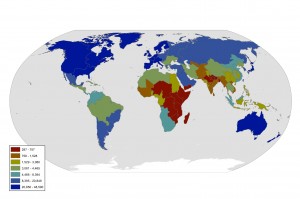 Nominal Per Capita GDP By Demic Regions, 2009, US$

The Demic Atlas provides an alternative to standard state-based maps of global development, designed for broad comparative purposes. As several GeoCurrents commentators have noted, the demic framework is not suitable for all forms of comparison. Studies aimed at determining the relationship between governmental action and economic development, for example, must rely on the state-based framework, as it is sovereign states and their subdivisions that generate and implement official policies. The current project aims instead for a generalized overview that can reveal expansive global patterns obscured in standard maps. Based on the principle of demographic egalitarianism, the demic maps portray heavily populated countries at a much higher level of resolution than do standard depictions, while representing lightly populated countries at a lower level of resolution. The goal is to render the world as a whole with broad but relatively even brush strokes. To see whether the demic framework successfully serves such a purpose, the current post contrasts a world map of per capita Gross Domestic Product (GDP) constructed on its terms with a conventional, country-based map of the same indicator.

Before comparing the two maps, it is important to note the limitations encountered when assessing economic development through GDP. GDP measurements, which ostensibly tally the total value of goods and services produced in a given year within a particular territory, are not as comprehensive as they might seem. Nominal GDP, calculated on the basis of official exchange rates, fails to take into account the different quantities of goods and services that can be purchased with the same amount of money in different parts of the world. As a result, GDP is increasingly measured in purchasing power parity (PPP) terms. Consequently, a separate GeoCurrents post will compare GDP as calculated in PPP. More troublesome is the fact that GDP figures tell us nothing about the distribution of wealth, and hence cannot always indicate whether a given region is, in general terms, wealthy or impoverished. Equatorial Guinea, for example, appears to be a fairly rich little country, with a nominal per capita GDP assessed at US $24,400 by the CIA in 2010 (although the World Bank comes up a figure of only 11,033 for the same year, a sure sign of data irregularities). Yet Equatorial Guinea remains a poor and underdeveloped country, as the vast bulk of its wealth flows into very few hands. Finally, GDP measurements ignore goods and services produced on a subsistence basis, or that are exchanged through barter outside of the formal economy. As a result, an utterly impoverished, desperately malnourished area dominated by market exchange might appear more prosperous than a subsistence-oriented area in which most people are relatively well fed and well housed. 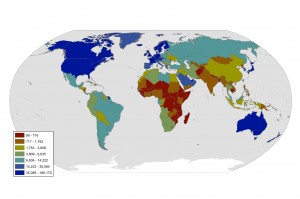 Despite such limitations, per capita GDP remains the most common metric of economic development, and it is therefore employed on our first set of maps. For purposes of immediate comparison, the two maps use the same color scheme and divide the data into the same number of categories, based in both cases on quantiles (dividing the data set at regular intervals to yield subsets of equal size). Note that the numbers associated with the color categories on the two maps do not match. This is partly a matter of the greater level of aggregation found in the demic map, which employs fewer spatial units and therefore reduces the level of economic differentiation across the world. The demic map also skews toward lower numerical values for the same color categories. Note how the second highest category in the state-based maps extends down to $14,239 and the third down to $6,636, whereas on the demic map the comparable figures are $8,395 and $4,466. This disparity reflects the fact that many wealthy countries, especially those of Europe, have small populations, inflating the number of units in the high-end group. Another consequence is to push large areas of the world into higher color categories on the demic map; compare, for example, the coloration of southwestern Africa on the two maps. (Both data sets can yield strikingly different maps depending on how many categories are used and where the breaks between them are placed; such issues will be explored in subsequent posts.)

The most conspicuous differences between the two maps are found in their depictions of South and East Asia. In the conventional state-based map, China is uniformly shown as a moderately poor country; in the demic map, China as a whole appears much more economically productive, while the substantial gaps between its prosperous coastal zone and its lagging periphery are revealed. Such changes, we believe, more accurately reflect actual conditions in the region. South Asia is also much more finely differentiated on the demic map. The standard view shows India and Pakistan as evenly falling into the second lowest economic category, while placing the smaller countries of the region in either the lowest slot (Nepal, Bangladesh) or the next highest category (Sri Lanka, Bhutan). In the demic map, a wide swath of north-central India falls in the bottommost grouping, whereas much of western India is placed significantly higher. Put differently, the standard map locates the poorest parts of Asia outside of India, whereas the demic map largely places them within that country. The actual differentials found within India, moreover, are greater than even the demic map indicates. The yellowish area of elevated economic standing in the western part of the country is composed of rapidly growing Gujarat and western Maharashtra, the latter area encompassing Mumbai, India’s economic core. Although western Maharashtra has a substantially higher per capita GDP than the eastern part of the state, such differences are not reflected in the data, as we were not able to locate up-to-date information at the district level for India; as a result, we had to treat each India state as a uniform entity. (Such expedients, we hope, can be avoided in later iterations of the atlas.)

Latin America is also mapped quite differently in the two schemes. As the region as a whole is relatively lightly populated, the conventional map depicts most of it with a higher degree of resolution than does the demic map. But Brazil and Mexico, Latin America’s two most populous countries, are exceptions, and as such are portrayed more precisely on the demic map. As that map indicates, southeastern Brazil is much more economically productive than the north, whereas southern Mexico is much less productive than the country’s northern and central areas. As a result, Latin America takes on a zonal aspect in the demic map, characterized by distinct latitudinal belts. Here one sees relatively high levels of economic development in the far north and south, with moderately low levels in the middle belt interrupted by a mid-income grouping in northern South America and southern Central America. Which of the two maps more accurately depicts the region is an open question. The demic map, in our opinion, best captures broad differences, whereas the standard map better illustrates a number of important local distinctions (the particularly low rankings of Haiti and Nicaragua, for example). Yet the standard map can also be misleading one this score; not how it exaggerates the economic standing of French Guiana, which, as an integral part of the country, is mapped at the same level as metropolitan France.

Africa appears in similar form in both maps. To be sure, the demic version reduces the standings of wealthy but lightly populated Gabon, Libya, and especially Equatorial Guinea, while elevating the position of the larger oil-rich region around the Bight of Benin and the Bight of Bonny in west-central Africa. As was the case in India, the economic differential in this area would have been accentuated if we had had access to comparable economic data for all the states of Nigeria. Lacking such information, we treated all Nigerian states the same, even though the southern part of the country, owing largely to its oil resources, is vastly more economically productive than the north. Elsewhere in Africa, the lower level of resolution found in the demic map causes it to miss some significant distinctions, such as the elevated standings of Kenya and Zambia vis-à-vis their neighbors.

Owing to the small size of most of its constituent units, Europe is depicted much more precisely in the conventional map. Note how the demic depiction slots all of Western Europe into the highest GDP category, whereas in the state-based map its southern reaches (Spain, Portugal, and Italy) are ranked slightly lower, reflecting that map’s finer level of differentiation at the upper end of the scale. In southeastern Europe, the state-based map again better captures local differences, such as the low standing of Moldova. Yet in the broadest comparative terms, one could argue that the small population of Moldova (3.5 million) renders it undeserving of such focused attention.

The demic framework functions most poorly in the Middle East (Southwest Asia), a region characterized by profound economic diversity. Here one finds both the world’s richest country according to most measurements (Qatar), as well as one of the poorest states outside sub-Saharan Africa (Yemen). As a result, some countries in the region are unduly elevated on the demic map. This flaw is especially notable in regard to Iraq, which is classified with Saudi Arabia and the Gulf states, and Syria, which is placed in the same region as much wealthier Turkey, Cyprus, and Greece. The position of Yemen, on the other hand, is unduly demoted on the demic map, due to its classification with Ethiopia, Somalia, and Eritrea. 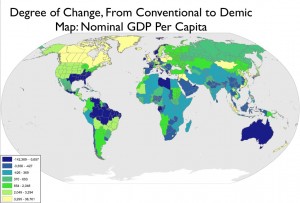 The final map shows the degree of difference found between the two maps, as reflected in all of the constituent units of the demic framework. As is immediately apparent, some of the greatest changes are found in the poorer parts of large countries that are abstracted from their usual national positions (north-central India, interior China, northern Brazil). Perhaps most interesting is this map’s depiction of North America. Whereas Canada and the United States appear in identical form in the first two maps, this map shows that the actual numbers associated with different parts of both countries have changed considerably.  Canada comes out with a higher figure on the demic map, due its classifications with western and northeastern United States. Southeastern US, on the other hand, ends up with a significantly lower figure, due to its separation from the more economically productive parts of the country.