Although Colombia is not usually classified as a major oil-producer, it ranks 19th in the world according to the Wikipedia, turning out more than a million barrels a day in late 2014. Although this figure was well below that of Venezuela (2.5 million barrels a day), it surpassed those of such well-known oil exporters as Oman and Azerbaijan. It is no surprise, therefore, that Colombia has taken an economic hit from the recent decline in the price of oil. Compounding Colombia’s woes are the continuing strikes on its oil infrastructure by leftist rebels. According to a recent Financial Times article, “rebel attacks on pipelines cost state-controlled oil company Ecopetrol $430m in lost output last year.” As a result of such problems, the “Colombian peso [is] one of the weakest freely-traded currencies in the world, rivalling the rouble and the Brazilian real by falling 36 per cent over the past 12 months.” 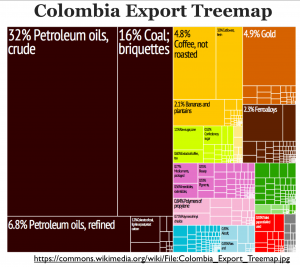 But as another Financial Times article notes, Colombia has been able to weather the recent economic storm better than most oil exporters. The Colombian economy is buffered by its broad production of other goods. As its currency has fallen, exports such as coffee, flowers, car parts, and textiles have surged ahead. Columbia is particularly competitive in swimwear and 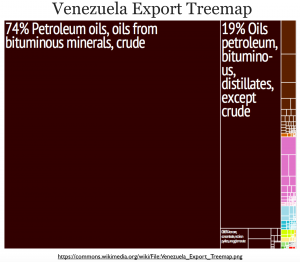 underwear; in 2013, its international sales in these categories brought in some US$ 133 million. As the export treemaps posted here show, Colombia is much less dependent on oil than Venezuela, its neighbor and rival. (Tensions between these two countries have intensified in recent weeks, as Venezuela has closed the border and deported hundreds of Colombians.) 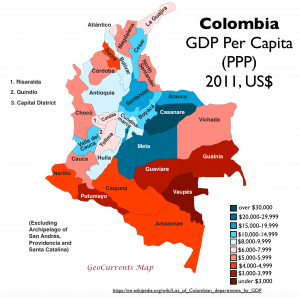 But despite the profitability of some of Colombia’s other exports, oil still looms large. Its significance is readily apparent in the map of per capita GDP posted to the left. As the map shows, the value of goods and services produced per person in Colombia’s 32 departments varies by more than an order of magnitude. The 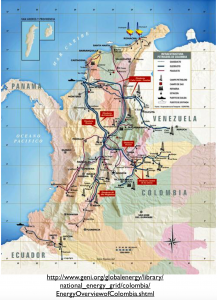 most economically productive departments, Meta, Arauca, and Casanare, form the heartland of the Colombian oil industry. All are relatively lightly populated 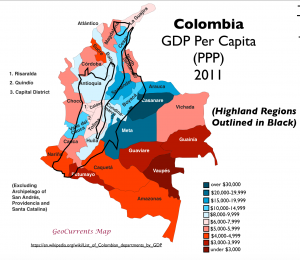 lowland departments; Casanare, for example, has only around 350,000 inhabitants. Their economic productivity runs counter to the more general Colombian pattern, as the country’s elevated plateaus tend to be more prosperous than its lowlands. This pattern is apparent on the next map, in which the highland zone is outlined within dark black lines.

Per capita GDP figures, however, do not necessarily tell us much about the actual economic conditions found in particular places. At the sub-national level, wealth from extractive industries in peripheral areas often flows to more politically powerful regions. Unfortunately, more economically revealing statistics on such measures as average household income are not readily available for Colombia. Colombia Reports, however, has posted a 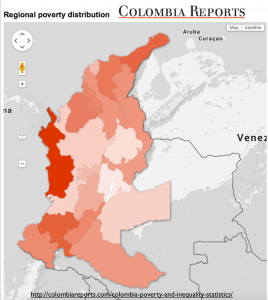 poverty-distribution map, which unfortunately lacks a key and excludes Arauca, Casanare and other eastern departments. As can be seen, oil-rich Meta has a relatively low poverty rate, but not to the extent that one might expect based on its raw economic output. Meta’s per capita GDP figure is roughly three times that of Cundinamarca, yet Cundinamarca, located near the capital city of Bogotá, has a lower poverty rate. Poverty is most pronounced in the distressed Pacific coastal department of Chocó, moreover, even though Chocó is more economically productive on a per capita basis than such departments as Nariño and Sucre. 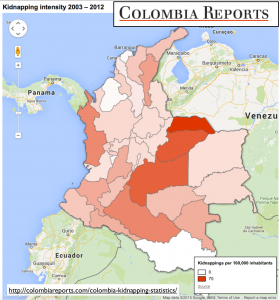 In some respects, Colombia’s oil-rich departments are more troubled than many much less economically productive areas. The oil industry apparently attracts not just attacks on infrastructure by rebels, but also other forms of crime and violence. As the Colombia Reports kidnapping map shows, Meta, Arauca, and Casanare rank at the top of this unfortunate indicator. Kidnapping in Chocó, a department noted for drug smuggling and corruption, is also elevated.

Colombia’s oil industry is associated with a significant amount of environmental degradation, although its severity is much debated. Many locals even attributed a severe drought that hit Casanare Department in 2014 to oil extraction. Although oil drilling itself has no influence on precipitation, it is possible that a variety of oil-extraction activities reduce dry-season stream flow. Informed observers, however, are more inclined to blame such problems on deforestation in the headwater areas located in the Cocuy Highlands. More recently, however, the problem has been one of excess rain, as floods in early and mid-August 2015 forced many people in Casanare to flee to higher ground. 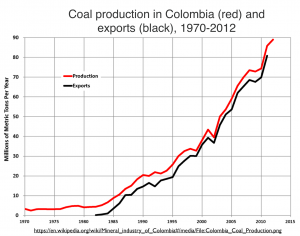 Oil is by no means Columbia’s only major source of energy. The country has a fair amount of natural gas and significant hydroelectric potential. Coal is even more important. Colombia ranks 11th in the world in coal production, and its standing in terms of coal reserves is similar. Colombia’s reserves are almost entirely composed of high-quality anthracite and bituminous coal. 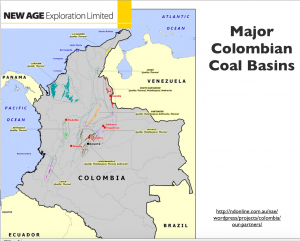 As a consequence, both production and exports have surged ahead in recent years. Colombia’s largest coal mines are located in the northern departments of La Guajira and Cesar, but deposits are widely scattered across the northwestern half of the country.

Global coal prices have dropped significantly, and the use of the fuel is of course increasingly opposed due to concerns about climate change. Some coal producers operating in Colombia, however, remain committed to expansion. As was recently reported in BloomburgBusiness:

Murray Energy Corp. plans to increase output at the Colombian coal mines it bought from Goldman Sachs Group Inc. this month, betting it can lower costs enough to withstand the prospect of several more years of low prices.

The U.S. coal producer founded by Robert E. Murray intends to push up the annual output rate at the La Francia mine in northern Colombia to 3 million tons by the end of the year from about 2.5 million tons now, Murray said in a telephone interview Monday from his headquarters in St. Clairsville, Ohio.

The industry is in a “very distressed and dangerous condition,” with low prices set to last through the end of 2017, he said. “Murray Energy has done its planning to contend with and compete in this depressed market.”

Local activists, not surprisingly, have leveled harsh criticisms against foreign-based coal producers operating in Colombia. Glencore PCL in particular has been accused of “whisking profits out of the country, while causing environmental and labor issues.”