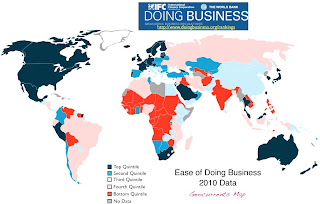 If the Ecological Footprint Index (discussed last week) gives one take on global development, the World Bank’s Ease of Doing Business Index provides another. It assesses the time and effort required to start, run, and close a business, and is measured on ten axes, including ease of obtaining construction permits, employing workers, registering property, getting credit, paying taxes, and enforcing contracts. The annually released index is closely followed by the international business community; a reduced ranking makes it more difficult for a country to attract foreign investment, and an enhanced position can have the opposite effect. After this year’s index was released several weeks ago, congratulations were passed around in improving countries, while commiserations circulated in those that declined. The Manila Bulletin expressed dismay at the Philippines’ dismal ranking of 148 out of 183 countries. Indian journalists bemoaned their country’s poor showing, and especially the fact that it “fares worse than most neighbours, including archrival Pakistan.”

The map posted above depicts the overall “ease of doing business rankings,” with the 183 ranked “countries”* divided into five equal quintiles. Not all of the 183 entities, however, actually appear on the map, as the base-map does not depict micro-states. Luxembourg does appear, its expanse exaggerated, but top-ranking Singapore is nowhere to be seen. A number of island countries in the Pacific and the Caribbean are also absent.

The Ease of Doing Business Index contains both expected and unexpected findings. Wealthy countries, no surprise, tend to be business-friendly, whereas most poor countries present formidable obstacles to would-be entrepreneurs. A handful of mid-income states, however, come in with unexpectedly high rankings, including Mexico, Peru, South Africa, Thailand, and Malaysia. Saudi Arabia also receives an elevated position, although suspicions have been raised about the Saudi government manipulating its statistics in order to receive a favorable ranking. The former Soviet Baltic states (Estonia, Lithuania, and Latvia) are intriguingly more business friendly than any of the former Soviet satellites of eastern and central Europe. Georgia also ranks high, the poorest country to make the upper quintile. Whether Georgia’s business-promoting practices will translate into sustained economic growth remains to be seen.

The business map of sub-Saharan Africa bears a close relationship with the Human Development Index (HDI) map of the same region. Countries that facilitate private enterprises, such as South Africa, Botswana, and Namibia, also do well on the HDI index. Ghana and Rwanda also favor business, and both have experienced economic expansion in recent years. On the other side of the ledger, a slew of tropical African countries rate extremely low on both indices. On the ease of doing business chart, Ethiopia’s and especially Zambia’s relatively high showings are unexpected. Zambia in particular is showcased by the World Bank for its markedly improved ranking.

In other parts of the world, correlations between the ease of doing business and economic development fail. In South Asia, India ranks last in business friendliness, yet it is economically much stronger than either Pakistan or Bangladesh. Globally as well, the link between economic expansion and business-promoting policies are vague at best. Several booming countries rank in the middle quintile (China, Vietnam), others fall into the fourth quintile (Brazil, Indonesia), and sizzling India (with GDP growth of 9.0%, 7.4%, and 7.4% p in 2007, 2008, and 2009) sits in the bottom category.

The significance of such seeming anomalies is open to question. Perhaps India and China would experience even faster economic growth if they eased the burdens on their businesspeople, although in the case of China it is difficult to imagine quicker expansion. Perhaps the ease of doing business is not as significant as the World Bank imagines it to be. Or perhaps the index itself misconstrues or fails to adequately measure what it takes to run a private enterprise.

Geocurrents will thus continue to examine the Ease of Doing Business Index over the next few days, examining its constituent measurements in some detail.

*Not all of the entities listed are sovereign states, as both Hong Kong and Puerto Rico are tabulated.