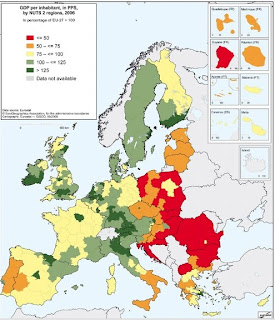 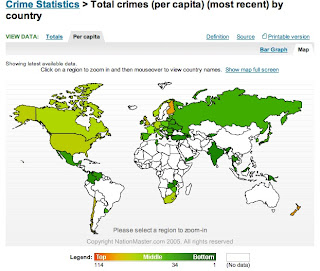 World thematic maps that treat each country as a holistic entity can be highly misleading. Consider, for example, the ubiquitous economic development map based on per capita gross domestic product. Here we see such countries as Brazil, India, and China uniformly colored, as if the goods and services they produced were evenly distributed over their vast expanses. In actuality, per capita GDP varies by roughly an order of magnitude from the wealthier to the poorer regions of each of these countries. More finely subdivided maps are much more revealing, but they can also be hard to find. In the case of the European Union, fortunately, a treasure trove of regionally specific maps is available from the European Commission Eurostat website: http://epp.eurostat.ec.europa.eu/statistics_explained/index.php/Category:RegionsEuropean.

On the Eurostat map reproduced above, a number of significant spatial patterns jump to the eye. Notice how Prague stands out from the rest of the Czech Republic, and how Athens is differentiated from the rest of Greece. The north-division in Italy is clearly apparent, as is the gap between the prosperous south of Germany and its poorer northeastern counterpart. This is just one of many detailed maps available at the Eurostat site, which delves into social as well as economic issues. The map of internet usage is especially noteworthy, revealing as it does a substantial cultural divide between what we might call the networked north and the sociable south.

To be sure, maps based on country-level data can also be valuable, especially for those parts of the world divided into relatively small countries. Such maps cease to be useful, however, when dubious data is employed – as happens all too often. The worst single example that I have come across is a NationMaster map of per capita crime rates, reproduced above. A glance at the key reveals that this map identifies Finland and New Zealand as crime-ridden, while Colombia, Yemen, and Papua New Guinea are portrayed as practically crime free. The accompanying table gives Yemen an absurdly low (and surreally precise) rate of 1.16109 crimes per 1,000 people. Finland, we told on the same page, suffers a crime rate roughly two orders of magnitude greater, at 101.526 per 1,000 people

(http://www.nationmaster.com/graph/cri_tot_cri_percap-crime-total-crimes-per-capita). Similar problems are encountered elsewhere on NationMaster, a site that compiles a huge array of official statistics. The figures for rape rates, for instance, listed on the home page as one of the site’s “top stats,” ranks Saudi Arabia as the safest country for women while marking Australia as the third-worst with Canada close behind.

Could anyone serious believe that a woman is 250 times more likely to be raped in Australia than in Saudi Arabia? — or that Finland’s overall crime rate is 100 times that of Yemen? Finland is famous for its relatively crime-free environment; Yemen is a land of anarchic clan-based violence and rampant kidnapping. In Finland, however, most infractions are reported and recorded, whereas in Yemen few crimes reach official attention. If NationMaster labeled its map and chart “rate of reported and recorded crimes,” it would be an accurate and useful index of police efficiency, if not of criminal activity. But it does not. Does anyone at NationMaster scrutinize the data that is displayed on its site? Does anyone care?

Underlying the promulgation of such misleading maps is our tendency to take the sovereign state for granted: to treat all recognized countries as if they were equivalent entities with comparable governmental capacities, including the gathering and compiling of accurate statistics. This is not the case. And as far as statistics themselves are concerned, we should recall Mark Twain’s warning: many stats are lies, some damned, other worse.