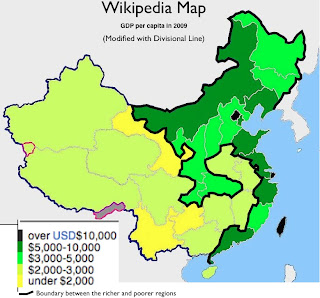 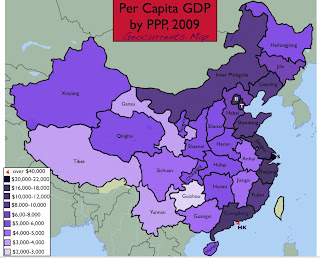 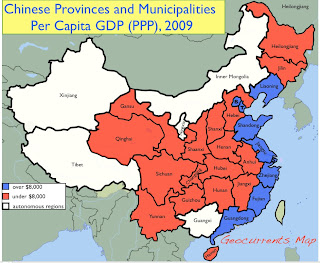 In mid August 2010, global news outlets reported that China had just surpassed Japan to become the world’s second largest economy. The comparison was in nominal terms, based on the relative values of the two country’s currencies. If measured by PPP (purchasing power parity), which ignores exchange-rate values to focus on what can actually be purchased in the domestic market, China’s economy outstripped that of Japan almost a decade ago. As social scientists usually favor PPP over nominal assessments of Gross Domestic Product, the news of China gaining second-place status was not really news at all.

Although its booming economy is vast, China is still not a wealthy country. In terms of GDP per capita, it ranks (by one assessment) 84th out of 194, just below El Salvador and Turkmenistan and just above Namibia and Ukraine. But speaking of the relative wealth of China as a whole is misleading. Not only is China a country of continental scope, but its regional economic disparities are the largest in the world. In 2009, per capita GDP in Hong Kong was more than 16 times that of Guizhou ($42,748 vs. $2,682 in PPP). Even if one excludes China’s rich “Special Administrative Regions” of Hong Kong and Macao, the discrepancy remains pronounced; Shanghai ’s per capita GDP is over $20,000.

Available maps of per capita economic production in China fail to adequately convey its geographical distinctions. The Wikipedia map posted above makes it seem as if the difference between China’s most productive and least productive regions is only around five-fold. It also downplays total Chinese production by using nominal rather than PPP figures, and it depicts Taiwan as part of China, rather than a de facto independent country. The map’s main problem, however, is the way it minimizes the profound gap between coastal and interior China. The overall impression a reader might gain from glancing at the map is one of relative wealth across China’s northeastern quadrant, with a narrow extension of prosperity reaching along the coast to the southeast. (I have modified the Wikipedia map accordingly, using a thick black line to show how it neatly bifurcates China into richer and poorer halves.) In actuality, it is this narrow southeastern strip that forms the truly prosperous part of China, not the greater northeast.

Some of the difficulties of mapping economic differences in China are unavoidable. Per capita GDP data is the standard information source, yet its use results in systematic distortions. Mining regions, for example, often yield elevated GDP figures due to the high value of the minerals extracted, yet may remain relatively underdeveloped by most criteria. In China, the autonomous region of Inner Mongolia appears to be one of the more prosperous parts of the country on the maps above, and it has certainly experienced blazing economic growth in recent years. But as it relies heavily on coal, natural gas, rare earths, niobium, zirconium, and beryllium, Inner Mongolia is not as broadly productive as official figures might seem to indicate. Inner Mongolia is also a vast area, larger than all of China’s southeastern coastal provinces put together, and economic output varies greatly from one part of the region to another. Mapping Inner Mongolia as a single unit masks this diversity. The same may be said of other administrative divisions, but the larger the unit, the larger the distortions generally are.

Another problem stems from the data themselves. Economic statistics from China are notoriously uneven, as even the Chinese government admits. According to a May 2010 story in People’s Daily Online, local official often exaggerate growth: “problems with statistics were exposed after regional gross domestic product (GDP) figures ended up surpassing the national GDP growth.”

Over the next few days, Geocurrents will post several alternative depictions of the geography of Chinese economic production, using the same data source that was used to produce the Wikipedia map posted above. By employing more categories and by turning to PPP rather than nominal data, the first Geocurrents map highlights the disparity between the poorest part of China, Guizhou, and the richest, Hong Kong (marked with an offshore “HK”). It does not, however, adequately depict the discrepancy between the coastal and interior regions of the country, largely because of the inclusion of Inner Mongolia as a single unit of analysis.

The second Geocurrents map above addresses the coastal/interior divide head-on. To avoid the problem of Inner Mongolia, it maps only the area sometimes called “China Proper,” excluding the so-called Autonomous Areas that are home to most of the non-Han Chinese ethnic minorities. By using PPP data and placing the cut-off line at $8,000, this map shows a clear coastal-inland divide. All but one coastal province* falls above this figure, and even the excluded one, Heibei, comes fairly close to it. Interior China, on the other hand, lags well behind. Aside from excluded Inner Mongolia, no major political division in China located farther than 100 miles from the coast exceeded a per capita GDP figure of $6,000 in 2009. A peculiar feature of China’s province-level economic data is the missing middle; relatively few provinces report per capita GDP figures in the mid-income $6,000 to $9,000 range. (China’s overall GDP was reported at $6,568 in 2009.) The coastal-interior split thus divides China starkly into a relatively prosperous zone and a relatively poor one; so does the urban-rural divide, but that operates at a different scale of analysis, and calls for a different kind of mapping.

* The insular province of Hainan is treated as distinct from the coastal zone.