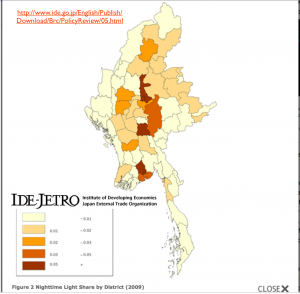 After posting the excellent Wikipedia map of per capita GDP in Thailand in the previous GeoCurrents article, I decided to look for similar information on Burma (Myanmar). I was not surprised to discover that such information is lacking, as the Burmese government publishes little economic data. I did, however, come across a 2012 article from The Economist that highlights a fascinating study by Satoru Kumagai, Souknilanh Keola, and Toshihiro Kudo. These scholars have attempted to map regional economic development in Burma on the basis on nighttime light intensity. As they argue:

Myanmar’s official statistics provide considerably outdated and narrowly covered data on the country’s economic and industrial situation. Data on geographical economic activities are particularly lacking. However, it is critically important for policy makers to know what the economic geography is like in Myanmar when they envisage sustainable and balanced economic development. 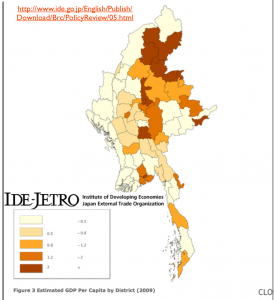 After analyzing the light patterns, the authors matched the resulting data with population figures to determine preliminary comparative per capita GDP by region. The resulting map shows areas above and below the national average, which is given a numerical value of “1.” The darkest areas on the map, in other words, are believed to have per capita GDP values that are more than twice the national average.

The Economist article provides a convenient summary of Kumagai, Keola, and Kudo’s findings:

Among other things, the researchers’ satellite-enhanced number-crunching reveals that:

1. Three regions of Myanmar—Yangon, Mandalay and Naypyidaw—emit 40% of the country’s light at night-time.   (Yangon alone  accounts for 22% of it.)

2. GDP per head in these three areas is more than twice as high as the national average.

3. Almost all of the districts that border China have a GDP per head higher than the national average.

4. Two out of the 12 districts that border Thailand have income levels that exceed the national average.

The border districts with India and Bangladesh, by contrast, are pitch-black, and poorer than the national average. 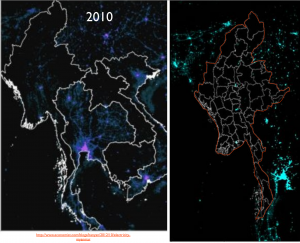 If correct, these findings are important. First, they indicate a relatively low level of regional economic differentiation in Burma. (Recall that in neighboring Thailand, the most developed province has a per capita GDP figure more than 40 times that of the least developed province.) Second, they reveal the explosive growth of Naypyidaw, which was of little significance before it was selected as the new capital city in 2005, a move that was widely criticized as economically irrational. Third, and most surprising, they show the deep importance of trade with China and the corresponding development of the northeastern border zone. This rugged frontier was a marginalized periphery until relatively recent times. Inhabited mostly by non-Burman “tribal” groups,” it has also been noted for its numerous ethnic insurgencies that lasted from the time of independence until the 1990s. Indeed, bitter fighting continues to this day in the Kachin area of the far north, which has generated major flows of internal refugees. Yet according to this analysis, much of Kachin state has a significantly higher than average level of economic development. It is also noteworthy that drug production (opium and methamphetamine) and gambling are major forms of enterprise along much of the Burma-China border; evidently they bring significant economic rewards. 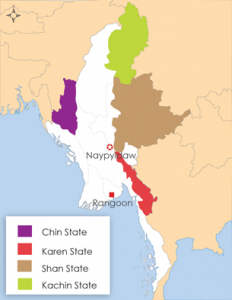 As noted in both the original article and the summary in The Economist, Burma’s border with India is in contrast a low-light zone, forming a dark splotch on the map of the night sky reminiscent of North Korea. Much of this region is the territory of the Chin, one of Burma’s many so-called tribal peoples. Information on the Chin Hills is difficult to find, as until recently the area was essentially off-limits to foreigners. The authors of a recent article in The Independent claim to have been the first outsiders to visit the area in 50 years. As they write, in rather exaggerated prose:

Today, the Chin have left their savage past long behind, and thanks to Christian missionaries, they are also literate. But in the process, they have been deposited in a kind of ethnic limbo: Christians in an overwhelmingly Buddhist land, Burmese citizens who feel neither Burmese nor anything else. A century ago, they were unrivalled hunters in the dense forests through which they wandered; today, the hills are denuded, the tigers and bears and deer are long gone; hunters with locally-made guns still march out into what remains of the woods, but the odd wild pig is the best they can hope to bring home. And the plight of the Chin is that of those hunters writ large: locked in a land which is as much their prison as their paradise.

Information on the Chin, however, is available in The Irrawaddy, an invaluable independent news agency that reports on Burma and neighboring countries. As noted in a recent article, Chin leaders are currently unhappy with Burma’s ethnicity questions on its new census forms:

Most data collection was completed last month for the United Nations-backed census, the first such exercise in Burma for more than 30 years. One question asked by volunteer enumerators was on ethnicity, a sensitive subject in Burma, where the official list of 135 ethnic groups is highly controversial.

The Chin National Action Committee on Census (CNACC), a civil society group formed by Chin political parties and NGOs, issued a statement Friday compiling its observations on the census-taking process.

Burma’s list of ethnicities includes the Chin nationality, under which a bewildering 53 “subgroups” are listed.

In the statement, CNACC requested that in the census everyone identifying under a Chin subgroup be counted together as ethnic Chin.

As is often the case, determining who belongs within a given ethnic group can be a highly charged issue.