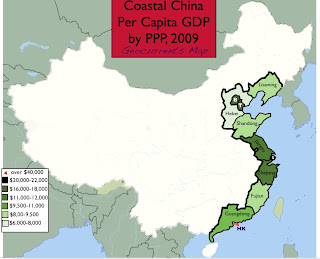 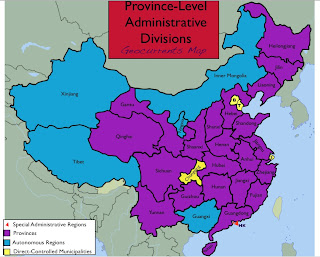 Such discrepant figures, however, are not exactly what they seem, as they partially mask China’s other major economic divide, that separating urban from rural areas. At the top of China’s economic charts are metropolitan areas that are not part of the regular provincial framework: Hong Kong, Macao, Beijing, Tianjin, and Shanghai. They are generally tabulated and mapped as if they were provinces, which makes them seem unduly productive, as they lack extensive rural hinterlands. If other Chinese cities were separated from their surrounding provinces, they too would appear significantly richer than their neighbors. (In China, four separate categories constitute “province-level” administrative districts: provinces, autonomous areas, special administrative regions [SARs], and direct-controlled municipalities. Beijing, Tianjin, and Shanghai are direct-controlled municipalities, as is Chongqing in the interior, even though it includes vast rural areas. Hong Kong and tiny Macao in the south are classified as SARs*.)

Across China, the economic gap between urban and rural areas is large and growing, vexing Chinese officials. According to a March 2010 article in China Daily, “urban per capita net income stood at 17,175 yuan last year, in contrast to 5,153 yuan in the countryside, with the urban-to-rural income ratio being 3.33:1.” Similar urban rural divergences are visible in almost all aspects of life, including public health, accident rates, and infrastructure. According to one recent report, the discrepancy in internet penetration “continues to increase. In 2007 there was only a 20% difference in urban and rural Internet usage, but that grew to 24% in 2008 and 30% in 2009.” To be sure, economic and social disparities between cities and the countryside are common features of most sovereign states, but the gaps are especially pronounced in China.

On the economic map of coastal China posted above, five inordinately productive non-provinces stand out, three direct-controlled municipalities (S=Shanghai, B=Beijing, and T=Tianjin) along with two SARs (HK=Hong Kong, along with unlabeled Macao). But even if one were to ignore these deviant metropolitan units, economic disparities within the coastal belt remain pronounced, with Zhejiang’s figure of $11,591 besting Hebei’s 6,387 by a healthy margin – almost exactly the same margin by which first-place Connecticut beats last place Mississippi among U.S states.

Hebei’s level of per capita economic production would, of course, be much higher if the municipalities of Beijing and Tianjin were included within its territory. But then again, Zhejiang’s output would increase by a similar margin if it included Shanghai, just as Guangdong’s would surge if it encompassed Hong Kong and Macao. In overall macro-regional terms, it is clear that China has three economic hubs: a north coastal core around Beijing and Tianjin, a central coastal core encompassing Shanghai and much of Zhejiang and Jiangsu, and a southern core focused on Hong Kong and central Guangdong. But as this analysis indicates, it is actually the two southern core areas that form the economic focal points of contemporary China.

*To add to the terminological confusion, the two special administrative areas have actual autonomy, with their own political, monetary, and legal systems, whereas the officially demarcated autonomous regions do not.