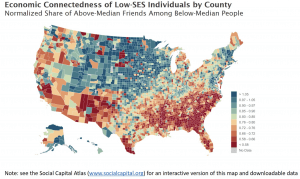 A new map by Harvard economist Raj Chetty and his associates has been getting a lot of attention. The map, based on a massive array of data, shows the share of friends among people below median in socioeconomic status who are above median in socioeconomic status. (See this short article for a more complete explanation; also here and here.) The conclusion of the study is simple: “Children who grow up in communities with more cross-class interaction are much more likely to rise out of poverty.” The counties in blue on the map thus have more favorable conditions for the upward mobility of the poor; those in red, more unfavorable.

Some of the spatial patterns seen on the map are stark. The socioeconomic connectedness of lower-level individuals is low across most of the southern third of the country, with the exception of much of central Texas and Oklahoma. Anomalously high-connectedness counties within this low-connectedness zone are generally suburban to some extent (for example, Williamson County in Tennessee, just south of Nashville’s Davidson county). But even many affluent suburban counties in this “greater south” post below average levels, including Ventura and Santa Barbara in southern California.

A corridor of high socio-economic connectedness extends from central Virginia to southern Maine (excluding the Delmarva Peninsula and southernmost New Jersey). This region is highly urbanized, with many major cities. Anomalously low-connectedness counties within this high-connectedness zone generally contain cities with relatively poor urban cores, such as Springfield, Massachusetts in Hampden County. The several counties of New York City all rank relatively low; only Richmond County (Staten Island) appears in a shade of blue. Intriguingly, the suburban counties around Washington DC and Philadelphia rank higher than those near New York.

A much larger although less populous area of high socio-economic connectedness is found the north-center-west portion of the country, centered on the western Great Lakes, northern Great Plains, and northern Rockies regions. This is, contrastingly, a largely rural and mostly agricultural area, although it does contain a few major cities, including Denver and Minneapolis-St. Paul. Anomalously low-connectedness countries within this high-connectedness macro-region generally contain large Native American or Hispanic populations.

To a certain extent, the patterns found on this map replicate those found on a map of per capita income. The main reason is simple: poorer people living in rich countries meet relatively high socioeconomic status people far more often than do poor people living in poor countries. But there are many exceptions to this crude generalization. Several wealthy counties in southern Florida and southern California, for example, have low rates of cross-class connectivity. In contrast, much of Kentucky and southern Indiana have higher rates of connectivity than might be expected based on their socioeconomic characteristics. 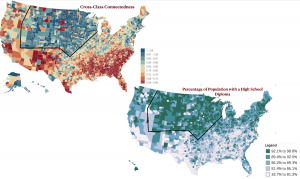 In many parts of the county, the closest connection with class connectivity seems to be educational levels. This point is illustrated by blocking off roughly the same “north-center-west” macro-region on Chetty’s map and on a map of the percentage of people with high school diplomas. But again, the correlation does not hold everywhere. The paired Kentucky maps, for example, do show a general correlation between education and connectivity, but several counties, such as Grayson, 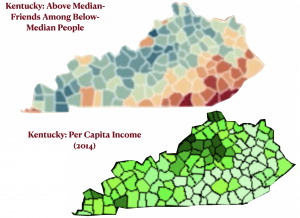 have low numbers of high-school-educated residents 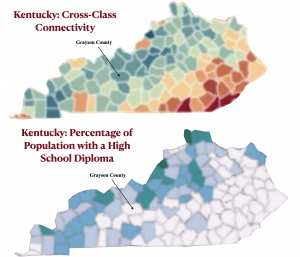 but healthy levels of cross-class friendship. 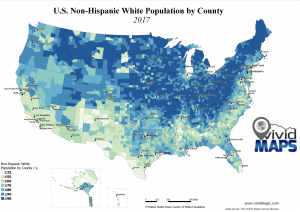 In the United States as a whole, the map of cross-class friendships correlates poorly with race. The “whitest” American countries have some of the highest and some of the lowest levels of connectivity. Overall, however, Black, Hispanic, and Native American areas rank low on Chetty’s map. And in “north-center-west” zone of high connectivity, race/ethnicity seems to be the crucial variable. As the four juxtaposed maps showing the region where Minnesota, Iowa, South Dakota, 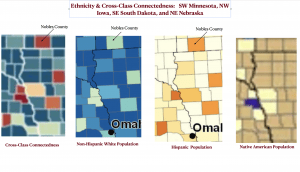 and Nebraska converge illustrate, counties with large Hispanic and Native American populations have much lower rates of cross-class friendship than those dominated by Euro-Americans. Many of the counties in this part of the country that have large Hispanic populations are the sites of major meat-packing facilities. Workers in these plants tend to be socially isolated from the surrounding community. In early 2020, COVID-19 outbreaks were often particularly severe in these areas. As the Minnesota Department of Health noted:

In April 2020, early on in the COVID-19 pandemic, a COVID-19 outbreak temporarily shut down the JBS pork plant in Worthington, Minnesota [in Nobles County]. Employees at this pork plant identify as Hispanic or Latinx, African, or Asian immigrants, communities that have been hardest hit by COVID-19 due to many systemic barriers and challenges. Over 600 employees tested positive, leaving the small community in Nobles County with a ripple effect that was incalculable at the time.

In tomorrow’s post, we will look at socioeconomic connectivity in the Pacific Northwest.