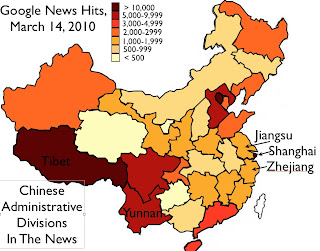 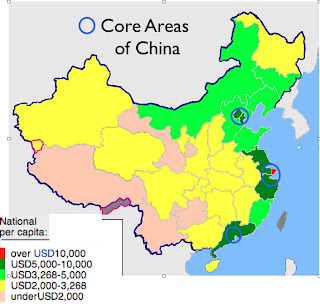 The standard geographical model of the world, as this blog seeks to demonstrate, unduly emphasizes the sovereign state (or “country”). States, of course, are vitally important, but so too are other geographical entities. The fixation on the independent country, compounded by the myth of continents, elevates some parts of the world while slighting others. China and India in particular are short-changed. These two are not merely large Asian countries, as France and Germany are large European countries. China and India are rather subcontinental landmasses comparable to Europe as a whole. In terms of population, they are roughly an order of magnitude larger than most other large countries, dwarfing anything in Europe. As a result, individual Chinese provinces and Indian states are comparable not to provinces of European countries, but rather to those countries in their entirety. Thus the Indian state of Maharashtra is analogous to Germany in terms of its area, population, cultural distinctiveness, and so on. Yet Maharashtra, like other Indian states, is little noticed outside of India, regarded merely as a local area within a rather monolithic country.

The slighting of first-order administrative divisions in the world’s two mega-countries is strikingly evident in the case of the Chinese provinces of Jiangsu and Zhejiang. To say that these provinces are little known in the rest of the world would be a gross understatement. Yet they are China’s two wealthiest provinces (excluding the province-level municipalities of Beijing and Shanghai; see map above). Both are slightly smaller than England in area; Zhejiang’s population (47 million) is a little less than that of England, whereas Jiangsu’s (77 million) is substantially larger. For most of the past several hundred years, northern Zhejiang and southern Jiangsu have formed the economic and, arguably, the intellectual heartland of China; today, together with Shanghai, they form one of the country’s three core areas (the other being Beijing-Tianjin in the north, and Hong Kong-Shenzhen-Guangzhou in the south). The Jiangsu-Zhejiang region is now one of the main engines of the world economy; no matter how one examines it, it is a tremendously important place. Yet outside of China, neither province receives much notice. Instead, they vanish away into an almost undifferentiated China.

The slighting of these two provinces is evidenced by their low visibility in the global media. On March 14, 2010, the indispensible Google News aggregator listed 1,377 stories containing the word “Zhejiang” and 1,365 with “Jiangsu.” These are not large numbers: a similar search for “Netherlands” (a much smaller European country) yielded 35,290 hits, while “England” (a comparable European sub-state entity) gave 166,624 returns. Asian countries of similar population also returned vastly more news articles (27,755 for Thailand). Even the smallest states in the U.S. are mentioned far more often in the news sources surveyed by Google, with Rhode Island receiving 16,271 mentions on March 14, 2010. (Note: surveying the Google news aggregator is far from perfect, as it searches for the word rather than the place; as a result, “Hunan” is somewhat over-represented due to the prevalence of “Hunan restaurants” in the United States.)

Not only are Zhejiang and Jiangsu generally overlooked in the global media, but when they are discussed the stories seldom go beyond narrow business concerns. Today’s top Google news story for Jiangsu is “AOU Submitted Application to Establish Subsidiary in Kunshan, Jiangsu,” and for Zhejiang it is “Toyota Should Compensate China Drivers, Official Says.” Areas of comparable significance in other parts of the world are generally reported on more comprehensively.

News from China, of course, is limited by China’s own restrictions on the press. But it is notable that other Chinese administrative divisions are covered much more extensively than Zhejiang and Jiangsu. The map above shows how many Google news stories were returned on March 14, 2010 for each of China’s main administrative divisions. Yunnan, Tibet and few other areas are relatively well covered; on a per capita basis, Tibet is reported on much extensively than the rest of China. The key provinces of Zhejiang and Jiangsu, however, receive scant notice.