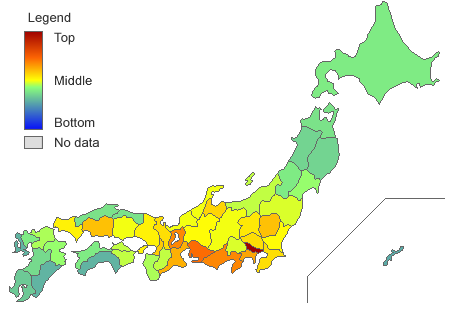 Japan is commonly perceived as an egalitarian society. It is a well-developed country commonly thought to have limited poverty; and as such, Japan is often grouped with the egalitarian Nordic countries. For example, in The Spirit Level: Why Equality Makes Societies Stronger, Kate Pickett and Richard Wilkinson* argue that equal societies are better for all citizens, using Japan as an important example. In actuality, inequality in Japan runs deep. Japan may be more egalitarian than the United Statues, but it is still beset by many layers of inequality. 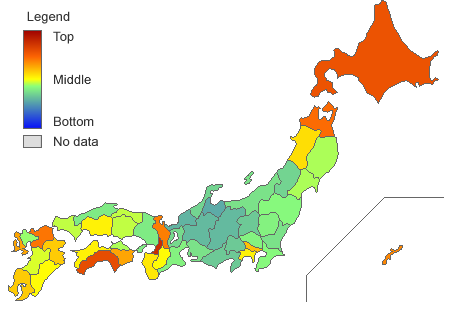 Proportion of Population Living on Welfare

My previous blog entry explored three distinct layers of geographic inequality, focused on China, which all apply to Japan: regional disparities, the rural/urban divide, and the existence of an urban underclass. The map posted here shows the percentage of the population defined as living on welfare. The prefecture with the greatest proportion of welfare households is Osaka, with 4.35 of every 100 people in this category (colored red in the map).  However, throughout Japan, more families live under the poverty line than live off welfare, as nearly one in six lives on less than $1,830 a month for a four-person family. The map highlights significant regional inequalities across Japan. In general, the north and the south (including the island of Okinawa) are poorer, whereas the center of Japan is better off. In particular, the area between Tokyo and Osaka has the lowest rates of households living on welfare.

Like most other countries, Japan also has a significant rural/urban divide. Cities have a much higher levels of development and economic vitality. This economic divide manifests itself in several forms, particularly education. The cities tend to have more student funding and are able to provide better educational opportunities, especially in regard to English language instruction. Although cities are generally better off than rural areas, there is a significant poor urban population across Japan, even in the wealthiest cities such as Tokyo. As seen in the map of households receiving welfare, the highest rates tend to be in large metropolitan areas.

Another form of inequality significant for Japan is the gender disparity. Among well-developed countries, Japan’s gender inequality is pronounced, as measured by several different indices. Although Japan is often compared to the Nordic countries, it has comparatively much higher levels of gender inequality. Opportunities for Japanese women may be better than those found in less-developed countries, however,  Japan’s gender disparity is unique for its level of development.

In many regards, Japanese culture tends to value humble and reserved behavior. This tendency directly relates to perceptions of economic disparity across Japan. Although many people live below the poverty line, such poverty is often hidden. As poorer people are often ashamed about their socio-economic status, they commonly work hard to “keep face” by seeming to be better off than they actually are. Such behavior makes economic inequality in Japan particularly easy to overlook. Furthermore, reserved attitudes make it difficult for the poorer population, as Japanese society as a whole is against inserting themselves in other’s lives, and hence often refrain from helping others economically. In contrast to many other countries, Japan tends to keep poverty out of sight and mind (the victims of the recent tsunami are an exception here.) Japanese culture is conducive to maintaining an illusion of greater equality than what actually exists.

Another major difference between Japan and most other countries is that the Japanese tend to not discuss or identify with a particular “social class.” Although people often know who is “binbo” (poor) and who is “okane-mochi” (money-holding, rich), politics are generally not based around such distinctions. As a result, the government’s ability to pursue class-based policies is limited, leaving poorer citizens’ interests neglected.

Percentage of Children in Poverty

A 2006 OECD (Organization for Economic Co-operation and Development) report on inequality in Japan provides insight on inequality in Japan. It shows that inequality has been increasing recently, linked to the stagnation of the Japanese economy. The report demonstrates that in some ways, Japan may actually have a less equal distribution of wealth than the OECD average. Although income disparities in Japan are lower than in most OECD countries, taxes and transfers do not always benefit those in need. In particular, the system of financial reallocation has been slightly regressive; as a result, the percentage of children living in poverty in Japan has increased since the 1980s if one takes into account taxes and transfers. In fact, Japan now clearly is above the OECD average in terms of percentage of children living in poverty. As this demonstrates, Japan is characterized by many significant hidden elements of economic inequality.

Note: Maps are taken from this map database. Also, special thanks to Tyler Mantaring for his insight.