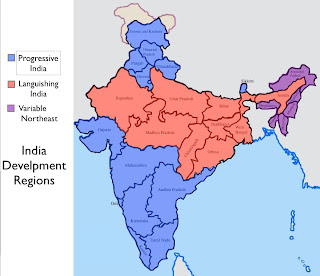 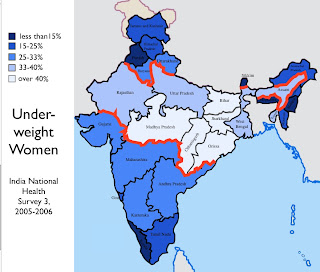 According to Oxford University’s recently released Multidimensional Poverty Index (MPI), South Asia and sub-Saharan Africa have similar levels of intensive poverty, far higher than those found in other regions of the world. The same report shows that South Asia contains the world’s largest number of truly impoverished people. As the Hindustan Times reported on July 15, 2010, “there are more ‘MPI poor’ people in eight Indian states (421 million in Bihar, Chhattisgarh, Jharkhand, Madhya Pradesh, Orissa, Rajasthan, Uttar Pradesh, and West Bengal) than in the 26 poorest African countries combined (410 million).” Such a figure stems both from India’s huge population and from the fact that its impoverished population is more geographically concentrated than that of sub-Saharan Africa. While the Oxford report reveals an MPI poverty rate of 81 percent in the Indian state of Bihar, it also showed a rate of only 16 percent in the state of Kerala.

As a result of such regional disparities, generalizations about poverty, economic development, and social conditions in India can be highly misleading. Owing to its large size, vast population, and high levels of cultural diversity, India is more than just a country; like Europe, it is a subcontinent. Indian states are in most respects comparable to European countries. They cover similar territorial extents, have similar populations, and are marked by similar levels of socio-economic diversity. The state of Maharashtra, for example, contains 97 million people in 119,000 square miles (308,000 square kilometers), making it closely analogous to Germany, with its 82 million inhabitants spread over 138,000 spare miles (357,000 square miles).

Over the next week or so, Geocurrents will examine the spatial patterns of Indian development in some detail. Most of the maps that will appear are based on data from the comprehensive India National Health Survey 3, carried out in 2005-2006. Some of the relevant statistics are posted in the Wikipedia; others are accessible through the National Health Survey’s own webpages. Mapping at the state level, of course, still conceals considerable diversity, since conditions often vary significantly from district to district. But a cartographic analysis at the state level reveals striking patterns across India as a whole.

The various maps to be posted this week reveal a consistent developmental split within India, separating a zone of acute deprivation from areas of much greater social and economic development. The first map (above) presents a composite view of this basic divide, revealing a solid swath of territory across north-central India that lags behind the rest of the country. Southern India, Western India, and far northern India have exhibited rapid progress in recent decades, surging ahead of the north-center. The small states in far northeastern India, in contrast, show inconsistent patterns of development, with high and low scores jumbled together in an unpredictable way.

To be sure, different development indicators – per capita GDP, literacy, electrification, and so on – yield different maps, showing a number of interesting deviations from the general pattern outlined above. Such anomalies will be discussed as they come up. For starters, however, consider an indicator that closely follows India’s basic developmental split: underweight (i.e., inadequately nourished) women. As the accompanying map shows, every state within the “poverty belt” of the north-center shows higher levels of female malnutrition than any state elsewhere, with the single exception of little Tripura in the highly variable far northeast.

The causes and consequences of India’s developmental divide will be taken up in detail over the next few posts. As a historical note, it is important to note that the current map represents an inversion of the traditional norm. Over the ages, north-central India has formed the political, demographic, and economic core zone of the subcontinent. In particular, wealth and power were concentrated in the middle and lower Ganges Valley, a zone of fertile soil, abundant moisture, and easy transportation. Today this area, comprising the states of Uttar Pradesh and Bihar, is India’s – and hence the world’s – heart of poverty.