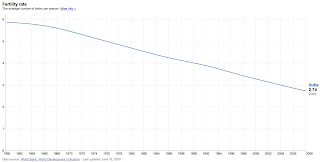 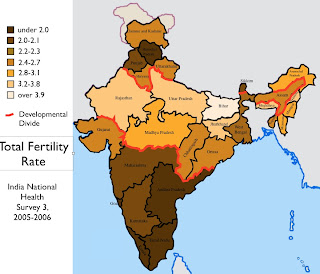 On July 12, 2010, the Telegraph reported that India will surpass China as the world’s most populous country by 2026, its population rising to 1.6 billion by 2050. According to the Indian demographic study referenced by the article, continuing growth threatens the country’s economic development, requiring new approaches to population control. The report linked economic insecurity among India’s 500 million poor people to high rates of teenage pregnancy, which in turn keeps the fertility rate elevated.

Demographers agree that India will become the world’s most populous country within the next few decades, although the exact date at which it will bypass China is impossible to predict. India’s current total fertility rate (TFR) is 2.72, far higher than China’s 1.76. Whether continuing population growth in India will hamper its economy, however, is a matter of hot debate, as the Telegraph article makes clear. It is also uncertain whether new approaches to family planning are necessary. As the chart above shows, India’s fertility rate has been declining at a relatively consistent rate since roughly 1970, despite shifts in national demographic policy.

Although India’s population is continuing to expand, it is misleading to contend that the country as a whole has an unsustainably high birth rate. As the map above shows, by 2006 all southern Indian states had birthrates below replacement level. The large southern states of Andhra Pradesh and Tamil Nadu reported total fertility rates of 1.8—well below those of the United States, France, or Sweden. Far northern India is also rapidly transitioning to lower birthrates, and even the relatively poor state of West Bengal is approaching population stability, with a fertility rate of only 2.3 in 2005-2006.

To the extent that India still suffers from excess births, the problem is limited to the languishing states of the north-center. Bihar’s TFR, although declining, still registered at a problematic 4.0 in 2005-2006. Considering the fact that this impoverished and corruption-ridden state has more than 82 million living in an area smaller than the state of Ohio, this is a high figure indeed. In July 2010, Bihar announced that it would implement a new population control policy, to be formulated in collaboration with the United Nations Population Fund. Of particularly concern is the fact that 60 per cent of women in Bihar become pregnant by the age of 20.

India’s birthrate divide will likely intensify its economic division. The low-fertility states of southern and far northern India, already more prosperous than the center-north, will soon be reaping a “demographic dividend,” defined as “a rise in the rate of economic growth due to a rising share of working-age people in a population. This usually occurs late in the demographic transition when the fertility rate falls and the youth dependency rate declines.” While north-central states like Bihar and Uttar Pradesh struggle with surging numbers of children, the more prosperous states will be able to surge further ahead.

A heightened economic divide across India, however, will probably result in increasing migration, which could exacerbate local cultural tensions. Internal migration is already changing the cultural dynamics of several India states. A 2009 report showing that the proportion of Sikhs in Punjab had fallen below 60 percent, due mainly to Hindu migration from poorer states, caused considerable concern in the Sikh Punjabi community. In the near future, such controversies are likely to multiply across the more prosperous parts of India.