Poverty and inequality are contentious topics whose geography is often oversimplified. When many people think of extreme poverty and aid, they often focus on Sub-Saharan Africa, but global inequality and poverty are much more complex issues. Overall, it is increasingly apparent that a country-based framework that generalizes levels of income over entire national territories is inadequate, as inequality exists in at a variety of spatial scales. In many parts of the world, inequality is increasingly experienced at local levels.

Currently, inter-country income inequality accounts for approximately two-thirds of total global inequality. However, this figure is decreasing as many poorer countries are experiencing more rapid economic growth than wealthier countries. This trend leads to gradual convergence and hence less disproportion of wealth between countries. As can be seen from the PPP per capita GDP map above, between-country inequality exhibits distinct world regional patterns, but disparity within regions is also notable. 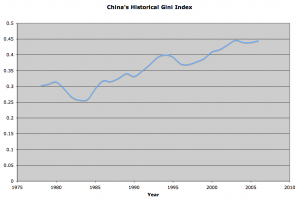 As The New Geography of Global Income Inequality acknowledges, much of both the decline in inter-country inequality and the increase in intra-country inequality stem from China’s recent economic development and parallel growth in internal wealth variation. With around one sixth of the world’s population, China significantly affects global levels of income inequality. During and immediately after the Cultural Revolution (1966-1976), China had relatively high levels of income equality: in 1978 its Gini index was even around 0.3. Although China was extremely poor at this time its population was fairly equally impoverished. Due both to China’s large population and its extreme deprivation, its standing at this time significantly heightened inter-nation disparities. With industrialization and the movement to market-based economics, China grew much wealthier, but its newfound riches have not been equally distributed, greatly increasing inequality within the country. China is thus a major factor in, and a great example of, the shift from inter-country inequality to intra-country inequality. 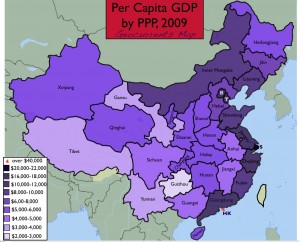 The general trends of inequality in China are similar to those found in many other countries. China has regional divides, rural and urban splits, as well as a significant urban underclass in the cities as well. Geocurrents has previously explored the regional differences within China itself, noting that the coastal provinces are significantly better off than provinces inland. However, it is important to note (as Geocurrents has), that even within the coastal provinces large economic distinction are found between different provinces. The rural/urban divide adds a separate layer of inequality in both coastal and inland provinces. The urban areas, on average, are much wealthier than rural areas, across all provinces. China’s hukou system of laws, moreover, seeks to prevent rural people from moving to cities unless they have official documentation. This system not only contributes to the inequality between urban and rural areas, but it also results in large migrant populations of undocumented rural workers in Chinese cities, generating rapidly increasing inequality and a large urban underclass in cities across China. Even though major Chinese cities have experienced breathtaking growth and are generally much wealthier than rural areas, a large portion of their population remains in severe poverty. The development of China has thus been linked with increasing inequality across the country, and has become a cause for concern within China.

China, as the world’s most populous country, exhibits high levels of economic differentiation, as is explored by this selection of interactive maps from the Economist. China is a good example of how increasing development is leading to greater intra-country disparities across the world. As China continues to economically expand, more areas of the country will become similar to the well-developed regions of Western Europe and the United States, symbolic of decreasing differences between countries. However, there will likely continue to be an increase of inequality within China, visible from multiple viewpoints, from the macro perspective across regions to the micro scale of individual cities and their neighborhoods.