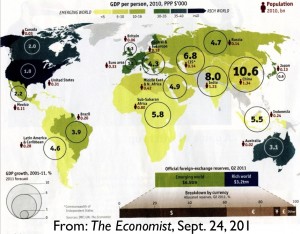 Last week’s (Sept. 24, 2011) issue of The Economist magazine featured a special report on the world economy, the central thesis of which is that the globe is currently undergoing a “great convergence in living standards,” pushed forward as “poorer countries speedily adopt the technology, know-how, and policies that made the West rich” (page 3). The thesis is debatable. Certainly China and India are quickly gaining ground, as are many other historically underdeveloped countries. It is also true that most long-developed countries are experiencing slow growth if not stagnation. Yet many poor parts of the world continue to lag, showing no signs of convergence with the zone of wealth and power. According to the International Monetary Fund, the Haitian economy shrank over the past year by more than five percent, the lowest “growth rate” in the world. At the same time, wealthy Singapore and Taiwan grew faster than either India or China, while hyper-wealthy Qatar topped the list, with a growth rate of 16.2 percent. “Convergence” may be a general trend, but it is clearly not the global norm.

Accompanying The Economist article is a world map of per capita GDP (in PPP for 2010), which includes as well population figures and forecasts of economic growth for 2011. The map is designed to drive home the article’s main point, that of global economic convergence. It does so, however, in a misleading, confusing, and, in places, erroneous manner. As such, in does not inspire confidence in the article’s central thesis.

The map’s initial flaw is its simplistic bifurcation of the globe into two zones: the “rich world,” composed of places with per capita GDP figures above $30,000, and the “emerging world,” with figures below $16,000. Each of these groups is in turn split into three subdivisions and mapped accordingly. The middle ground—places with GDP figures between $16,000 and $30,00—is unmarked. An unwary reader might assume that the grey countries unlabeled on the map constitute the missing middle, but that is not the case. In actuality, some of the world’s richest states (Norway, Switzerland, Singapore) and some of the poorest (Afghanistan, Nepal, Bangladesh) fall into this unmarked non-category. Alternatively, one might conclude that the middle position is actually unfilled, yet according to the IMF, twenty-six countries report per capita GDP figures between $16,000 and $30,000. Equally problematic is the map’s pairing of the “rich world” not with the “poor world” but rather with the “emerging world,” which seemingly assumes that the entire globe is automatically heading into prosperity. Yet what exactly, one might ask, are Somalia and DR Congo “emerging” into? These countries, after all, were more highly developed by most conventional measurements thirty years ago than they are today. It is of course possible that they will recover and forge ahead, but continuing chaos seems more likely, at least for the next few decades. Classifying such countries as “emerging” is thus little more than an exercise in unwarranted, if not mindless, optimism.

The Economist’s map manages to portray the poor parts of the world as rapidly developing by taking a single-year snapshot of economic growth and then engaging in a little cartographic sleight-of-hand. By grouping all sub-Saharan African countries together, for example, the region as a whole can be shown to be economically expanding at the rapid clip of 5.8 percent, easily besting the 1.8 percent growth rate of the United States. Africa’s per capita economic expansion, however, is not actually so high, as the region is also experiencing rapid population growth. The figures given, moreover, pertain only to the present year, and are thus not necessarily representative of recent trends, let alone future trajectories; if the Chinese economy were to stumble, many African countries would follow suit. Grouping all sub-Saharan countries together also hides the areas that are not currently growing. And even the growth that is occurring can be deceptive. Zimbabwe notched up a very impressive nine percent expansion rate last year, but that was largely due to its very partial recovery from its much more spectacular collapse during the first decade of the century.

The hazards of predicting future trends from current figures are best exemplified by Yemen. In 2010, Yemen’s economy reportedly grew at the sizzling rate of eight percent. Yet as local papers noted, precious few Yemenis benefitted from such expansion, which was based more on pricy oil exports than on genuine economic development. Considering the fact that Yemen’s oil is running out, as is its water, the country’s economic future looks far from bright—and that is not even taking into account its two major rebellions, its fractious tribal politics, its massive and brutally repressed anti-government demonstrations, and its entrenched networks of radical Islamists. The Economist’s map may classify Yemen as mid-level emerging economy, but I wonder if the magazine’s editors would be willing to invest any of their own money in such an envisaged emergence.

It might seem disingenuous to criticize The Economist for lumping together the economies of separate countries when that is exactly what I did in the Demic Atlas. But if one is going to aggregate data in such a manner, one has the obligation to do so in a consistent and justified manner, which is hardly the case here. Instead, some countries stand alone, others are grouped together in conventional categories, others in unconventional categories, and others are simply ignored. Some of the categories employed, moreover, overlap; Russia, for example, is portrayed as one entity and the rather insignificant Commonwealth of Independent States (CIS) as another, yet Russia is by far the largest and most important member of the CIS. The cartographer also seems to place Georgia, Turkmenistan and Ukraine within the CIS; in actuality, Georgia does not belong at all, Turkmenistan is an unofficial associate member, and Ukraine is a “de facto participant.”

The map’s depiction of Latin America and the Caribbean is even more problematic. To begin with, it excludes the region’s largest components, Mexico and Brazil, even though these countries are always placed within Latin America. More egregious is the placement of the rump Latin America in the lowest GDP category, with an aggregate GDP figure below $5,000 per person. In actuality, only a few of the demographically smaller countries of the region fall below that threshold, while all of the larger ones rank well above (Argentina $15,900; Chile $15,000; Peru $9,300; Colombia $9,600; Venezuela $12,000). To classify Latin America, with or without Mexico and Brazil, in the world’s lowest economic grouping, alongside sub-Saharan Africa and India, is absurd, reflecting a lack of familiarity with basic patterns of global economic geography.

Similar problems are encountered in the map’s portrayal both Europe and the Middle East & North Africa. The cartographer implicitly divides Europe into four regions, mapping separately the Euro area, Britain, and Central & Eastern Europe, while leaving the rest of the region in the unmarked grey category. But the map gets its own classification system wrong, as it neglects to include Euro-using Slovenia and Slovakia in the “Euro Area.” The “Central and Eastern Europe” bracket, moreover, seems to be a relict of Cold War geography with no contemporary significance, yet it oddly leaves out the Czech Republic. The map follows a more conventional definition of the Middle East & North Africa, although it excludes Turkey and Sudan, countries that are usually appended to the region. Although Turkey is correctly mapped as having a per capita GDP figure in the $10,000-16,000 range, it is unclear whether it is classified on its own or, unconventionally, as part of Central and Eastern Europe (articles on Turkey in The Economist are placed under the “Europe” heading, which seems increasingly inappropriate). The general portrayal of the Middle East & North Africa as an “emerging region,” with a per capita GDP figure below $16,000, is also misleading, as the Persian/Arabian Gulf sub-region boasts some of the highest per capita economic figures in the world.

The mapping of East Asia is also off-base. It is unclear if Mongolia is depicted on its own or as part of the CIS, but in either event the information given is incorrect. Mongolia has never been a member of the CIS, as it was never part of the Soviet Union. Its per capita GDP figure, however, falls well short of the $5,000-10,000 range in which it is mapped. Finally, the portrayal of Taiwan is nothing less than bizarre. At first glance, it looks as if the island is mapped as part of China, a maneuver that might curry favor with Beijing at the cost of ignoring reality. Close inspection, however, shows that the Taiwan is actually mapped as poorer than mainland China, placed in the same category as sub-Saharan Africa and India. In actuality, it belongs in the second highest category, with a per capita GDP figure above $35,000.

I am a fan of The Economist, valuing its depth, global coverage, and witty captions. I even use it as a basic text in my courses on current events. But the magazine’s incessant editorializing, habitual use of crude British slang, and sloppy cartography sometimes make me question that decision.