Compared to other countries, the United States has relatively high—and growing—levels of inequality, as measured by the Gini coefficient. Although surpassed by the notoriously unequal developing countries of Brazil and South Africa (indexes of 56 and 65 respectively), America’s Gini index is significantly higher than that of most other countries at similar levels of economic development. For example, the Nordic countries have very low Gini indexes, with Sweden as low as 23, but the European Union as a whole is more reflective of developing countries with a coefficient of 31. Historically, the US has had high but fluctuating Gini measurements. In 1929 it was estimated to be 45, but it had declined to 38.6 in 1968, during the height of the Great Society. Since the 1980s it has again increased, reaching 46.8 in 2009.

On the map of GDP per capita by U.S. state, several overarching regional trends are noticeable. The greater Northeast, extending from New Hampshire to Virginia, makes up the wealthiest part of the country. In contrast, the Southeast tends to be much worse off, especially Arkansas and Mississippi. Most states in the Midwest rank near the middle, while the interior West tends to be slightly poorer. The Pacific coastal region, like the northeast, is economically above average. Such generalizations are, of course, very broad, and thus need to be qualified. A close examination of inequality in the United States reveals that the phenomenon is too complex to be considered merely on a state-by-state basis.

More specific patterns are visible in the map of household income by county, at the top of the page. Here Appalachia stands out clearly. The region from West Virginia through the eastern half of Kentucky into Tennessee is one of the poorest areas in the United States. And as can be clearly differentiated in the map to the right, eastern Kentucky clearly stands out as the poorest section of Appalachia.

The county-based map reveals other patterns hidden by the state-level map. Although the Northeast corridor stands out for its prosperity, not all of its counties share equally in the wealth. Marked differences within states are clearly visible, especially the distinction between eastern and western Pennsylvania and upstate versus downstate New York. Also notable is the fact that many areas in the generally poor South, such as Atlanta, do quite well.

Several additional patterns are evident in the map indicating counties of “persistent poverty” (defined as having over 20% of the population under the poverty line for the last four censuses). In particular, as can be explored with these interactive New York Times maps, all of these regions have clear racial correlations. Eastern Kentucky is noteworthy for being the main zone of persistent poverty with a White majority. More striking is the Southern “Black Belt,” which stretches from the Mississippi River to South Carolina. Not only is it the largest area of entrenched poverty, but it is also the only large area in the United States with an African-American majority. Similarly, Latinos heavily populate the persistent poverty areas of southern Texas. Finally, most of the other counties of persistent poverty contain Native American reservations. The largest of these areas is the Four Corners region, especially northwest New Mexico, but scattered reservations in North and South Dakota as well as Alaska also stand out.

The rural-urban divide is also clearly seen on the county-by-county map. Metropolitan regions such as Chicago, Houston, and Denver are substantially richer than their rural peripheries. In general, cities and their suburbs have many more economic opportunities than rural areas. Although not all cities are equally prosperous, and not all stand out clearly from their environs, the rural-urban divide in the United States is plainly evident.

Even though metropolitan areas tend to be more affluent than surrounding areas, cities themselves contain high levels of inequality. Such complexities can be appreciated by examining more localized household income maps of metropolitan Los Angeles, San Francisco, and Oakland: 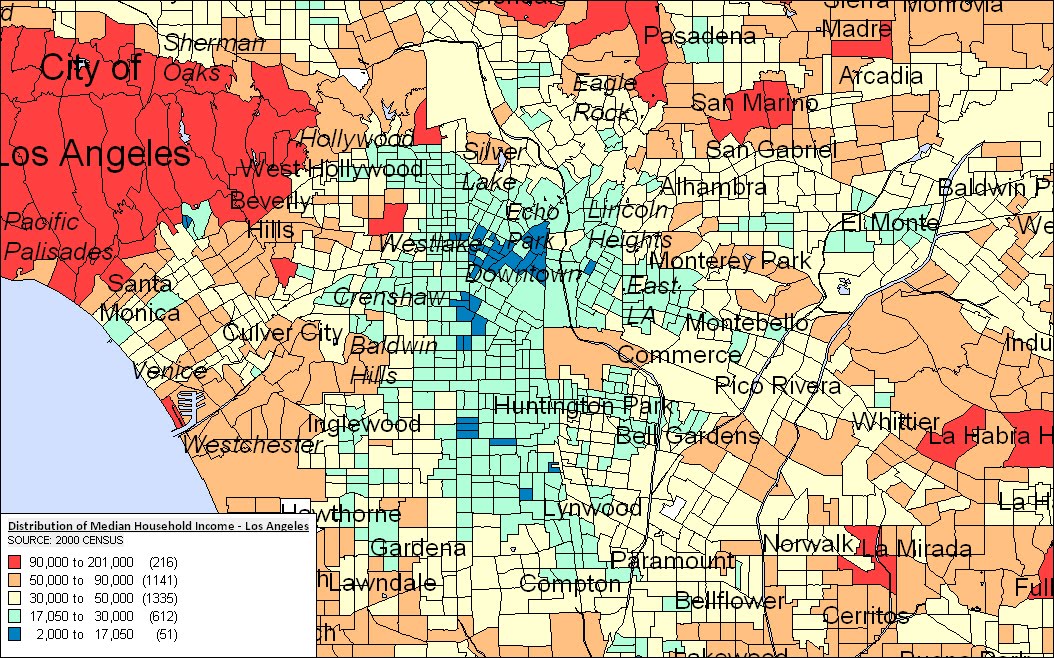 In all three cities, significant income differences are found at the neighborhood level. Downtown areas generally have significantly lower income levels than peripheral neighborhoods, which is the general pattern in American cities. These maps also undermine several stereotypes, such as the notion that San Francisco is wealthy and Oakland poor. Although the average San Franciscan is indeed better off than the average resident of Oakland, tremendous spatial variation is found in both cities. San Francisco contains a number of poor areas, including much of the central business district. The so-called Tenderloin in particular is infamous for its poverty and homelessness. In contrast,  the eastern Oakland hills are roughly as affluent as the wealthiest neighborhoods of San Francisco. As all three maps demonstrate, geographic economic disparities are most extreme within cities. The broader and more generalized maps are, the more they tend to oversimplify.

The Theil index calculates how much various counties add to or subtract from the overall level of inequality in the United States. As can be seen on the map, the Theil index shows that urban areas tend to add the most inequality, whereas poor rural areas, especially those discussed previously, lower overall inequality. The general similarities between this map and the one at the top of the post are notable, especially as more prosperous counties tend to contribute much more to higher level of inequality than poorer countries.  Taken together, these maps indicate some of the challenges of measuring inequality.

In general, the three geographic lenses discussed – regional differences, the rural-urban divide, and inequality within urban areas –provide insight into the complexity of inequality in the United States, but they do not give the full picture. For example, issues of immigration and race, only briefly touched upon, also play an important role in determining levels of inequality. Americans are generally aware of inequality in their country, but they tend to vastly underestimate it, as shown in the chart to the right. As the recent study of attitudes about inequalities demonstrates, most Americans significantly under-estimate the actual level of inequality found in their country.  Moreover, they would prefer to see levels of equality even greater than their generous over-estimate. Indeed, many pundits discuss the effects of an economically uneven society, but with looming budget deficits, there is little serious consideration of reversing the tide of increasing inequality.