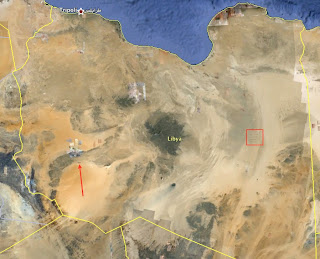 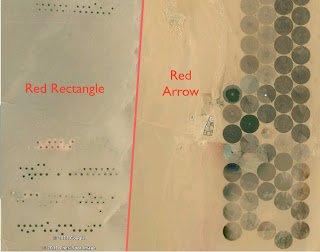 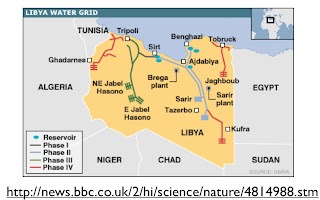 Viewed from space, most of Libya appears as a lightly colored patchwork of browns, tans, and light greys, indicating its arid nature. A few large dark grey areas that look at first glance like vegetation turn out to be barren rock surfaces. Some of the smaller dark patches, however, are irrigated farmland. Closer inspection of older agricultural lands typically shows irregular mosaics of date groves, small plowed fields, and fallow tracts. The new farmlands are strikingly different, dominated by either crisp rectangular blocks or the almost perfect circles formed by center-pivot irrigation systems. Some of the newer developments are massive, visible from earth’s orbit. In the first image above, consider the dark rectangular area at the end of the red arrow and the oddly linear features in the red rectangle. The second image reveals these features to be composed of center-pivot fields, tightly packed in one case and dispersed in the other. Such capital-intensive farms have been proliferating across much of southern Libya in recent years.

Libya’s new Saharan agricultural communities tend to be highly ordered affairs. Planning reaches an extreme in a series of hamlets near the oasis city of Kufra, an infamous hub of human trafficking in the southeastern desert. Each settlement is apparently composed of a small ring of houses situated in the center of a hexagon of partially irrigated land, with each house attached to a wedge-shaped slice of property. The resulting landscape has the appearance of an almost perfect realization of “central place theory,” a once-popular geographical theory that purported to explain the distribution of cities and towns. As hypothesized by Walter Christaller in 1933, economic activities spontaneously create hexagonal forms that dictate urban spacing. In Kufra, the honeycombs are clearly part of a grand governmental design.

Such grandiose developments in a nearly rainless environment have been made possible by the mining of ground water. Most of southern Libya is underlain by what is known as the Nubian formation, beds of porous sandstone some 500 to 3,000 meters thick that form excellent aquifers. Most of the water originated as rainfall during the last glacial period more than 15,000 years ago, when the Sahara was relatively moist. Under today’s hyper-arid conditions, the aquifers are not replenished, and thus yield “fossil water,” a non-renewable resource. Yet supplies are abundant; according to one estimate, the Nubian sandstone formation holds 150,000 km3 of water, dwarfing the 3,608 km³ of water (as of 2005) in the Ogallala aquifer, the largest underground pool in North America.

Libya has been heavily tapping the Nubian aquifer for several decades, in effect turning oil into water through massive investments. The so-called Great Manmade River is arguably the world’s largest hydrological engineering program, entailing 1,300 wells and 5,000 kilometers of pipeline that will eventually yield 3.6 million cubic meters of water per day – at a cost of some $25 billion. The project is inaptly named, as the water is transported underground in pipelines up to four meters wide (a sensible measure considering evaporation rates in the Saharan summer). Libyan sources proclaim the scheme a colossal success, one that has ended water shortages and improved water quality in Libya’s coastal cities while allowing major crop production in what has been barren desert. Thanks to the Great Manmade River, Muammar Gaddafi’s “eighth wonder of the world,” Libya has emerged as the world leader in hydrological engineering. Or so it is said.

Official reports claim that the water resources of the Nubian aquifer are so vast that they can be tapped at the current rate for more than a thousand years. But not all observers are equally optimistic; some claim that they could be exhausted within a century. Depletion will come sooner than anticipated if neighboring countries emulate Libya. Egypt certainly intends to do so, planning to withdraw 500 million cubic meters of water from the Nubian Aquifer Series annually.

Despite his enthusiasm for farming projects in the Sahara, Gaddafi has concluded that they are not adequate to meet his agricultural ambitions. As a result, he has been planning to develop massive tracts of land south of the Sahara, particularly in Mali. Here the Niger River swings north to the edge of the great desert before turning to the southeast as it courses toward the Atlantic. As reported by Environment 360:

Libya’s wholesale move into Malian irrigation and agriculture is the result of a secret deal between Mali’s president, Amadou Toumani Toure, and Libya’s Colonel Gadaffi. Paid for by Gadaffi’s sovereign investment fund, the Libya Africa Portfolio Fund for Investment, the deal hands the land to a Libyan-controlled organization called Malibya for 50 years and gives the Libyans undisclosed rights to the region’s water. … Local campaigners say [the Malian] government is in thrall — and hock — to Libya because it has become dependent on Libya for aid and investment. Many of its civil servants work in offices built by Libya, and international visitors stay at Libyan-built hotels.

The Mali-Libya water transfer scheme has obviously been derailed by the current political turmoil. Environmentalists and cultural-rights advocates hope that it is finished for good, as its local consequences could be devastating. The project would more than double the amount of water pulled from the river for irrigation, and the diversion would take place just upstream from the Niger’s great inland delta, where the river spreads into numerous shifting channels and annually floods vast areas, forming a productive farming, herding, and fishing area the size of Belgium. According to the Wikipedia, some researchers think that the Libyan project could “reduce the area under deep inundation in the Inner Niger Delta by 43%,” significantly reducing the region’s productivity.