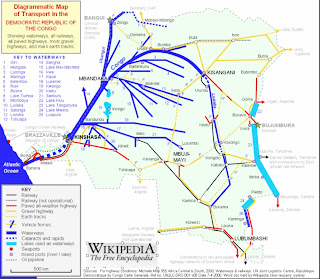 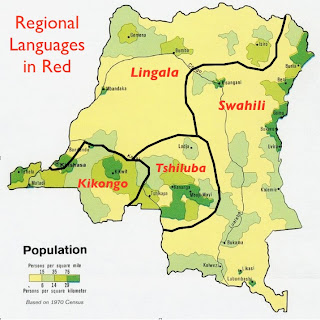 Yesterday’s post outlined the troubled history of the Democratic Republic of Congo. Today I would like to briefly examine a few of the geographical issues that make it a challenge for DR Congo to function as a country.

The first issue is transportation. To say that overland transportation is difficult in DR Congo is a laughable understatement, as is clear if one carefully examines the Wikipedia map included above. Note how the country’s meager road system fails to link many areas; note also how many roads are classified as “earth tracks,” meaning that they become impassible mud-pits after heavy rains, which occur frequently. As brief exercise, try figuring out how to travel from Goma in the east to Mbuji-Mayi in the south-center without using an “earth track.” Eastern DR Congo is much better connected to neighboring countries in east Africa than it is to the western DR Congo. It is noteworthy, however, that China recently (2007) agreed to lend DR Congo US $5 billion to improve its transportation system, in particular by upgrading the linkages between the major mining area around Lubumbashi and the ocean port at Matadi.

The second map overlays the distribution of DR Congo’s four major regional languages on a 1970 interpretation of its population density patterns. (Several hundred languages are spoken in the country, but these four are used as common, “transethnic” tongues.) Here we can clearly see how the country is divided into several distinctive “core” areas. Three of these linguistic groupings, moreover, extend deeply into neighboring countries. Eastern DR Congo thus has profound cultural ties to Kenya and Tanzania, where Swahili is also used as a common language. Voting patterns in the final round of the 2006 election closely followed language lines, with Joseph Kabila taking the Swahili-speaking areas, and Jean-Pierre Bemba, now imprisoned in the Hague for war crimes, winning in the rest of the country.

Does DR Congo make sense as a country? I wonder whether its recent history would have been less dismal if it had been allowed to break into four separate states after independence in 1960s.